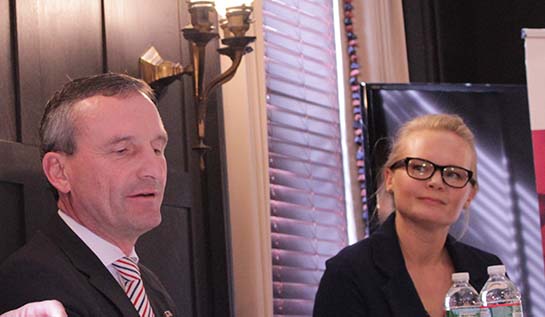 The Frederick S. Pardee School of Global Studies at Boston University, in partnership with the BU Initiative on Cities, was proud to host Thomas Geisel, Mayor of Düsseldorf, Germany, in a roundtable discussion on September 22.

“The mission of a social democrat is to assure the rich don’t keep getting richer at the expense of others. If we left all in our society to market forces, the social fabric would disintegrate,” Geisel said.

Geisel, the first social democrat elected mayor in Düsseldorf in 15 years, spoke on topics ranging from smart growth and gentrification to the burgeoning Syrian refugee crisis in his talk, Leading Cities from the Left.

“There are a lot of similarities between Düsseldorf and Boston. Both are similarly sized, and both have had to work hard to reinvent themselves in a lot of ways from a more industrial past,” said Graham Wilson, Director of the Initiative on Cities. He went on to describe Geisel’s background as a graduate of the Harvard Kennedy School and praise the compassion of his administration.

“We have tried to make sure we kept up with the problem of dwindling housing supply to combat gentrification. The last thing we wanted was a medieval scenario wherein only the wealthy could afford to live in cities. Our focus has been on smart growth, and on improving access to infrastructure and education. That is what a citizen has the right to expect from their government.”

Germany is expected to take in over 400,000 Syrian migrants in response to the global humanitarian crisis. That will mean a city the size of Düsseldorf can expect a growth rate of around 6,000 residents a year – about twice what Geisel’s civic engineers planned for.

“We need to welcome, feed, and accommodate these immigrants. When the crisis began, we set up a ‘Roundtable for Refugees,’ which rallied community support and engagement around the issue. We now have a situation in Düsseldorf where people who might hold xenophobic views don’t speak up in the face of the huge wave of solidarity,” Geisel said. “At the same time, we can’t have parallel societies. If people immigrate to Germany, they need to ascribe to basic values like education and tolerance. That’s what makes our country attractive.”

Providing an American counterpoint to Geisel’s narrative was Dan Koh, the Chief of Staff of Boston mayor Marty Walsh. Geisel and Walsh met later in the afternoon.

“Listening to Mayor Geisel’s comments on transportation, we are currently asking ourselves if it makes sense to redesign the Boston transportation grid, given the need to tighten our belts. We look for solutions to congestion problems that are no cost, such as policing intersections to keep drivers from ‘blocking the box.’ We’re always asking ourselves what we can do to squeeze more juice out of the lemon,” Koh said. “Earlier this year, Mayor Walsh said that Boston would absolutely accept Syrian immigrants in response to President Obama’s executive order. We received community feedback that was roughly 50 percent in support, and 50 percent opposed for reasons such as concerns about ISIS.”

Joining the conversation from the Pardee School was Assistant Professor of International Relations Kaija Schilde.

“I welcome the challenge to think about city politics in terms of reactionary and progressive policies like this, in part because I think that’s been the story of the EU for some time now,” Schilde said. “Disconnections between EU institutions led to a very aggressive reactionary border policy that have left so many Syrians desperate. I often say that the reason that little boy on the beach left Syria was Assad, but the reason he died was the EU. That’s deliberately provocative, and often people ask me what the solution is. As a professor, I want to say that the EU needs an FBI-like body to track what’s happening inside its borders. But with their current anti-democratic stance, as a human I don’t know the answers.”

Leading Cities from the Left was co-sponsored by the Center for the Study of Europe.