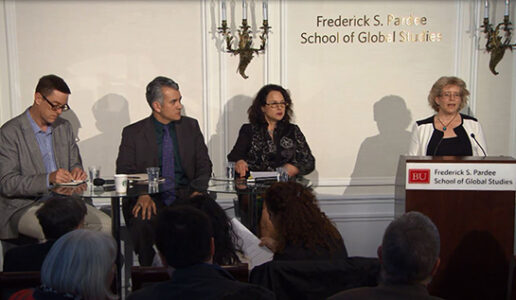 A capacity crowd filled the rotunda at the Frederick S. Pardee School of Global Studies on April 23 for a panel that broke down academic barriers in the study of the Islamic State, or ISIS.

Interdisciplinary Approaches to the Islamic State was the product of a collaboration between the Pardee School and the Institute for the Study of Muslim Societies and Civilizations (SMSC), one of the School’s affiliated regional centers.

“The panel seeks to transcend the focus on political and strategic concerns that has often dominated the treatment of the rise of IS/ISIS/ISIL in the media and bring some critical nuance and historical context to the way this phenomenon is being discussed,” said Pregill in promotion. “This is the inaugural event associated with Mizan, the new digital scholarship initiative I am heading at Boston University under the auspices of the Institute for the Study of Muslim Societies and Civilizations, with the generous support of the ILEX Foundation.”

Joining Pregill, Lori and Anderson were BU Professors Kecia Ali of the Department of Religion and Tom Barfield of the Department of Anthropology. Responses to the remarks at the panel were provided by a slate of guest contributors from Harvard University (Jessica Stern), Tufts University (Ken Garden), Boston College (Franck Salameh), and UMass-Lowell (Mia Bloom).