Monitoring and Miniaturization: Faculty Awarded $1M to Develop High-Resolution Sensors for Use with Nanoscale Devices

Professors Alexander Sergienko and Abdoulaye Ndao, working with a team of researchers at SUNY Buffalo, have been awarded a $1M Multidisciplinary University Research Initiative (MURI) grant by the Air Force Office of Scientific Research (AFOSR) to develop novel sensors for microelectronics. Modern chip design at the micro- and nanoscale requires fresh ideas in the development of sensing technology for analyzing and maintaining system performance and security. Sergienko’s and Ndao’s proposed contributions focus on the development of super-sensitive quantum electric and magnetic field sensors, with an emphasis on the development of novel metasurfaces.

Not unlike a human brain, electronic devices are composed of complex, delicate structures, as well as generally being encased in a larger “body” of one kind or another. This requires engineers to use non-invasive (remote) sensing technology in order to monitor their performance while operational, detect any problems, and so forth–without destroying or disrupting those operations in the process. However, the current trend toward miniaturization of nano-scale electronics is outpacing the effectiveness of existing sensor technology.

All electronic elements, such as transistors, emit electromagnetic radiation during their operation. As electronic components become smaller and more energy-efficient, these signals become correspondingly weaker and challenging to read. Older sensors are simply not sensitive enough to remotely detect what is going on inside a modern microchip.  Novel approaches are needed, which is where ECE researchers come in.

To design and construct sensors which can provide the exceptionally sensitive, detailed readings that are required, Professors Sergienko and Ndao are leveraging two major areas of professional competence: cutting-edge nanotechnological design and quantum optics.

Metasurfaces are subwavelength nanostructured devices; that is, thin structures composed of individual elements engineered into a lattice which can create specialized optical effects, such as splitting light in unusual ways, controlling its path, or in this case, causing non-natural electro-optical and magneto-optical material response. Metasurfaces with such finely calibrated nanostructures that they can operate at exceptional points, or points on a spectrum where several modes of physical phenomena (in this case, optical modes) meet and can be separated, can alter their optoelectronic properties in response to miniscule changes in an external magnetic or electronic field. In other words, they are highly sensitive to even the tiny signals emitted by modern nanoscale electronic devices.

To capture this information at the desired level of enhanced sensitivity, a method of interferometry–the measurement of the interference of waves, photonic waves in this case–can be used. Exploiting interference at the level of quantum entanglement offers additional features that are not available in classical optics, such that entangled-photon interferometric readouts offer much higher sensitivity and resolution than can be managed with more conventional photonic sensors, when used to measure the kind of nanoscale optoelectronic alterations described above.

This pioneering combination of approaches assures the successful development of the next generation of super-sensitive, high-resolution sensors, capable of providing real-time feedback on the performance of nanoelectronic devices, detection of embedded spy hardware or counterfeited components (via variations in electromagnetic signatures), and even enhance and inspire complimentary innovations in microchip design.

Professor Alexander Sergienko has been a member of BU’s faculty of Electrical and Computer Engineering since 1996, in addition to affiliations with the Physics Department and the Photonics Center. He is an Optica Fellow, holder of eight patents, and has co-authored three books on quantum communications, among many other publications. 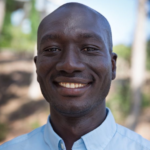 Professor Abdoulaye Ndao joined the Boston University Department of Electrical and Computer Engineering in 2020, accompanied by affiliations with the Division of Materials Science and Engineering and the Photonics Center. He received his PhD at the University Franche Comte, France, in 2014.