Spotting Osteoarthritis When It Starts 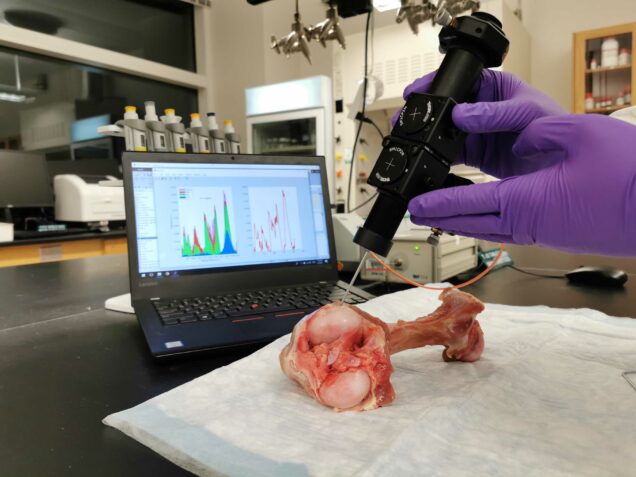 With a potentially game-changing application of laser technology to a disease that affects more than 30 million Americans, Michael Albro (ME, MSE, BME) and colleagues have garnered a research grant from the Arthritis Foundation. The team’s new kind of Raman spectroscope—a device better known for dating fossils and detecting art forgeries—might someday be used to assess the cartilage in your joints, picking up on signs of osteoarthritis before it sets in.

Osteoarthritis is the most common form of arthritis as well as the most common cause of disability in adults, young and old. It afflicts 32.5 million adults in the U.S., according to the Centers for Disease Control. The disease occurs when articular cartilage—the load-bearing connective tissue that covers the ends of bones where they meet to form joints—starts to wear away.

“It leaves your joint with this bone-on-bone grinding contact when you walk,” says Albro, using the quite common example of the knees. “It’s incredibly painful and debilitating. People suffer enormously, and it takes a toll on society,” given the prevalence of the disease and the costs of treating it.

There is yet no cure for osteoarthritis; one’s best hope is to get metal joint replacements, but they often wear out within two decades—and many of the people afflicted are still in their 40s or younger.

Indeed, says Albro, the early stages of the disease bring the best chance to halt or reverse the deterioration, once drugs that can do such a thing are developed (more on that below). So it would be a boon if clinicians could take a peek inside the joint, looking for the subtle signs—like disruption of collagen fibers—that signal trouble ahead.

Unfortunately, current methods of examining the joints—MRI and radiography—aren’t great at visualizing soft tissue. The procedures end up functioning more like autopsies, revealing what went wrong. “They can only assess whether your cartilage has already worn away,” says Albro. “At that stage, it’s too late to intervene.”

What Albro and team have developed is the first-ever Raman arthroscope. “It’s a probe that can be inserted into a patient’s knee joint to diagnose the state of their cartilage health,” Albro says.

The scope works by picking up on Raman scattering. “The concept is, when you shine a light on a specimen, a very small number of light particles, about one in a million, will undergo a shift in wavelength,” explains Albro. “When you count these shifted photons, it gives you a remarkably precise assessment of the chemical composition of that specimen.” In the case of Albro’s arthroscope, he says, “We can detect the earliest stages of cartilage degeneration with terrific accuracy compared to prior technology.”

If the Raman arthroscope becomes widely available, it could have great value for screening people at high-risk for OA, like athletes, military veterans and workers in strenuous occupations, among others.

As to the question of treatment, Albro says that the early diagnostic platform could in fact be what enables the development of a cure, because it can be used to test the efficacy of drug candidates.

Moreover, Albro and colleagues aren’t only aiming to diagnose the disease early. As they continue growing cartilage in his lab, the Raman arthroscope can also be used to assess the quality of such lab-grown cartilage meant for placement in late-stage OA patients.

The Arthritis Foundation award is the second grant Albro has received within six months (the first was from the Musculoskeletal Transplant Foundation), which points to momentum in his field, he says. “It shows that in many ways, the field of orthopedics is ripe for these new approaches.”