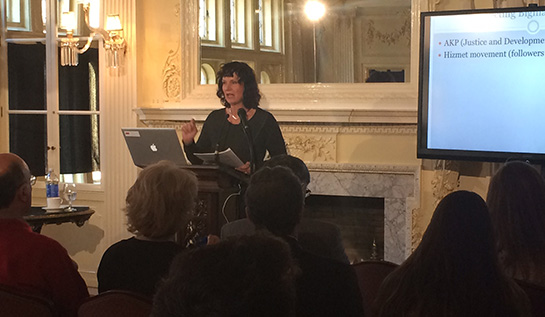 The lecture was delivered by Jenny White, Boston University Professor of Anthropology. It was cosponsored by the Institute for the Study of Muslim Societies and Civilizations, an affiliated center of the Pardee School, and held at the BU Castle before a large crowd.

The lecture examined the cult of personality around Turkish leader Recep Erdogan, a controversial and polarizing figure. White argued that Erdogan had cultivated a legend of being a ‘big man,’ fostering a kind of magical thinking that his personal power would be enough to cope with Turkey’s thorny issues of Muslim and secular identity.

The Campagna-Kerven Lecture series was launched by Madame Suzanne Campagna to provide a forum for informed discussion and debate about modern Turkey, and particularly to inspire students to learn about the country.  The multidisciplinary series was inaugurated in 1996 and it features scholars, artists and public intellectuals. The annual lectures have addressed and will continue to address a rich variety of themes on modern Turkish society, economy, culture and politics.  Campagna’s father, Mehmet Nahid Kerven, who died in 1974, was one of the famed “Young Turks.”