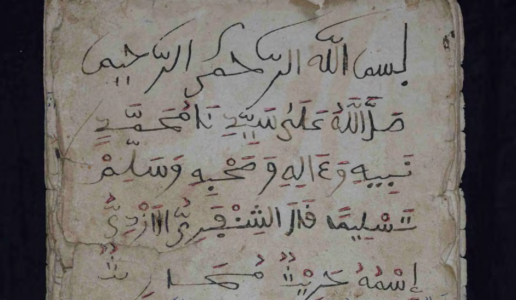 The African Studies Center, an affiliated center of the Frederick S. Pardee School of Global Studies at Boston University, have completed a project with Mugar Library focusing on the archives of Mandinka scholars of Casamance, Senegal.

The project initially focused on preserving endangered Mandinka Ajami manuscripts of the southern Casamance region of Senegal. However, the fieldwork team found on the ground when the project began that the endangered manuscripts were richer than initially anticipated. They encompass four major types: (1) Arabic texts; (2) Arabic texts with glosses in Arabic; (3) Arabic texts with glosses in Arabic and local languages (Soninke and Mandinka); and (4) Mandinka Ajami texts. Because all the manuscripts are equally important and document the preoccupations and intellectual traditions of the Mandinka people of Senegambia and beyond, the fieldwork team expanded the project beyond its original focus on Mandinka Ajami texts to include Arabic and bilingual (Arabic and Mandinka or Soninke) manuscripts they were allowed to digitize.

The team digitized a little over 18,000 pages of Arabic, Arabic-Ajami bilingual texts, and Mandinka Ajami materials covering a variety of religious and non-religious subjects. This reprsents the largest digital collection of Mande scholars’ work in the world, which will help scholars and students of Africa around the world enhance their teaching and research on various aspects of Africa.

The files can be viewed and downloaded here.