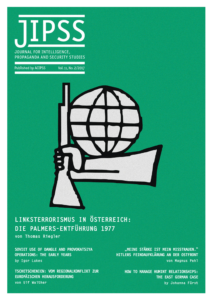 Joseph Wippl, Professor of the Practice of International Relations at the Frederick S. Pardee School of Global Studies at Boston University, was recently interviewed for a a journal article on the importance of intelligence studies in higher education.

Wippl was interviewed for an article entitled “To Hear the Grass Grow: A Conversation With Former CIA Operations Officer Joseph Wippl,” in the Journal for Intelligence, Propaganda, and Security Studies.

Wippl: It’s obviously extremely important. The leaders in this area are the British. They have a really terrific tradition of intelligence studies, beginning with Chris Andrew and now Richard Aldrich. When I go to intelligence studies conventions, there are always an incredible number of very capable British academics. The Israelis are obviously also very interested in this, and even the French. I feel that we [the Americans] are behind the British. There are many places in the U.S. where they do not even want to touch the stuff. I think the problem for Europe and especially Germany given its responsibilities in the modern world, is that it needs to not only have a strong intelligence service, but academic study of it as well because it’s so important in the formulation of policy. You’ve got a long way to go, Siegfried!