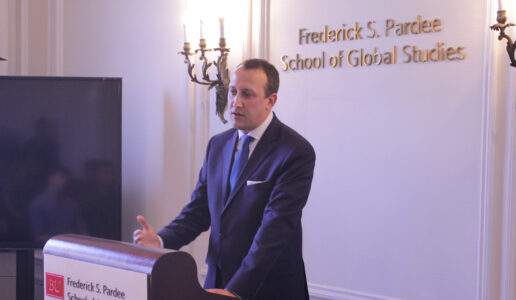 The Frederick S. Pardee School of Global Studies at Boston University hosted Carl Woog, Boston University alumni and former Director for Strategic Communications at the National Security Council under President Barack Obama, on March 21, 2017 for a conversation about his path from BU to working inside the Obama White House.

Woog, the recipient of the Defense Medal for Distinguished Public Service, also discussed his time serving as Senior Advisor to Secretary of Defense Ash Carter and previously Deputy Spokesperson for Secretary of Defense Chuck Hagel and Leon Panetta during which he represented the Pentagon on the full range of national security challenges facing the Obama Administration.

“As the Director of Strategic Communications for the National Security Council and previously at the Pentagon I had a front row seat as some of our nation’s top minds led our allies and partners through these challenges,” Woog said. “In many cases it was my responsibility to help communicate the President’s orders to keep the nation safe or respond to these world events.”

Woog shared his insight on the role of the communications staff inside the Obama White House, including during times when the administration was facing tough questions and decisions.

“There are very few meetings at the White House that did not have one of our senior communications advisors present whether in the Oval Office or Situation Room,” Woog said. “That’s not just because of any past practice President Obama of having some of his earliest advisors there, it was really a requirement to be there at the beginning of solving some of the most difficult issues in government. It’s important when you have those tough questions to have communications staff in the room from the beginning to help figure out how we are going to tell that story.”

Woog discussed his view of the major global issues that challenged the Obama administration and will continue to challenge President Donald Trump’s administration.

“Terrorism is just one challenge that we currently face as a society and as foreign policy experts. We also face an unhinged young leader in North Korea who many of my colleagues in the government think will be the biggest challenge facing this incoming administration,” Woog said. “We face a rising China brings many opportunities, but also serious competition and tension that must be managed, Iranian attempts to further disrupt an already chaotic Middle East, and of course a resurgent Russia that stands in flagrant opposition to a strong U.S.-Europe relationship and has also weaponized the internet to challenge our open society.”

The morning after the 2016 U.S. presidential election, Woog said President Obama called a meeting with the White House communications staff to outline their role in the final months of his administration.

“We stood around the President and Vice President in a circle and the President said that of course he was disappointed in the outcome of the election, but that history rarely moves in a straight line and that as a nation we’ve faced setbacks before. He told us as the communications team how we handled the loss would matter, and so he gave us some orders,” Woog said. “Our job was to work until the final minutes of the administration to accomplish what we set out to do, and to help prepare the incoming administration to do their best to protect the nation from day one. We were told to hold our heads high and to set an example for others in the administration and for our friends around the country. And then he went around the room, gave us each a hug and told us to get back to work.”

Following his talk, Woog joined Pardee School students for a working dinner where he further discussed his experiences in the U.S. government and offered career advice to students interested in pursuing careers in government and politics.