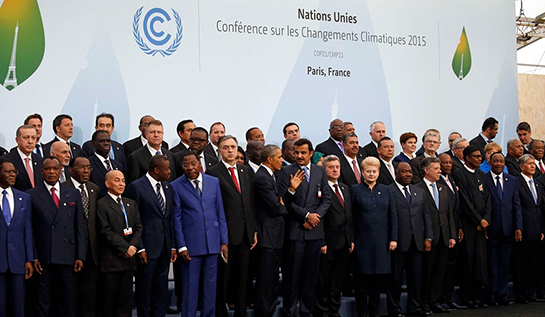 From his position on the front lines of decades of international climate negotiations, Adil Najam, Dean of the Frederick S. Pardee School of Global Studies at Boston University, has seen his fair share of promises to save the planet. But after a quarter century, he says, it’s time for action.

Najam made this sobering assessment as he traveled to the opening ceremonies of the 2015 UN Climate Change Conference in Paris, France, as part of the Pakistan delegation. He wrote about it in an Op-Ed published in the Guardian on Nov. 30 entitled “I’ve seen 21 years of COP failures. Paris needs to deliver action, not talk.”

It was December 2009. I remember sitting on a plane on my way to Copenhagen. I wondered if this would be the historic moment when the world came to its senses.

There was hope in the air. Indeed, I was greeted by stickers on the subway that renamed Denmark’s capital “Hopenhagen”. I smiled.

There was widespread anticipation – nurtured frantically by the host nation – that the UN-sponsored climate summit (COP 15) would be “historic”. That the impasse on global climate change would be broken. That major CO2 emitters – the US, EU, China, India – would agree on a meaningful binding agreement that would (a) limit their emissions, (b) support developing countries in their transition to low-emission futures, and (c) create a mechanism to assist vulnerable countries in coping with the costs of adaptation and climatic disasters that, by then, had already become inevitable.

That, of course, did not happen.

Today I am again on a plane, on my way to Paris for COP 21. This time, I am not holding my breath. Not smiling.

The Op-Ed was also used as a basis for an explainer of previous climate change conferences on the website Bustle entitled “What Have Other Climate Change Summits Accomplished? Disagreement Has Been A Theme In Past Years.”

At this year’s COP, Obama and other major carbon-producing countries hope to create a legally-binding plan that will reduce carbon emissions worldwide. Obama hopes all 195 countries will be on board, and things look promising so far. But Adil Najam, a professor of global studies at Boston University, penned an op-ed for the Guardian where he said that previous COPs seemed filled with anticipation and hope. In 2009, Najam attended the COP in Copenhagen, Denmark. He said the major carbon-producing countries — the U.S., the European Union, China, and India — hoped to develop a plan that would “(a) limit their emissions, (b) support developing countries in their transition to low-emission futures, and (c) create a mechanism to assist vulnerable countries in coping with the costs of adaptation and climatic disasters that, by then, had already become inevitable,” according to hisGuardian column.

But none of those things happened, he said. And nothing has happened since.

Najam was a co-author for the Third and Fourth Assessments of the Intergovernmental Panel on Climate Change (IPCC); work for which the scientific panel was awarded the 2007 Nobel Peace Prize for advancing the public understanding of climate change science. In 2008 he was invited by the United Nations Secretary General to serve on the UN Committee on Development (CDP). He was a member of the President of Pakistan’s Special Task Force on Human Development (2001) and served on Pakistan’s Presidential Commission on Higher Education (2002). Learn more about him here.