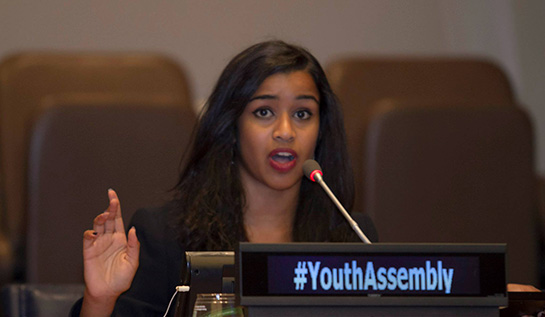 In August of 2015, Raina Kadavil was preparing to begin her freshman year at the Frederick S. Pardee School of Global Studies at Boston University. There was the usual last-minute tasks to accomplish; packing, ironing out travel details. Oh, and the little matters of publishing her first novel and speaking at the Youth Assembly at the United Nations.

“Since I was a little kid, I’ve wanted to be an author,” said Kadavil, Pardee’19. “But in the sixth grade, I took a trip to Kerala and volunteered at a local orphanage, and it kickstarted my interest in service. If you see something wrong in the world, I believe you should use your power to fix it.”

Her passions for writing and global justice have carried her along a unique path, starred with inspiring milestones. While in school in White Plains, N. Y., Kadavil joined a club called Global Ambassadors.

Her experience working on REACT stood her in good stead as she developed the “World I Want” video conference series, an initiative by the United Nations Association of the United States of America (UNAUSA).

Kadavil has also spoken at conferences for Zonta International, from which she was awarded the 2015 Young Women in Public Affairs Award. She was also named a Coca-Cola Scholar and received the President’s Volunteer Service Award.

Her first novel, The Voice of Thunder, was published this year from Ravenswood Press.

“I’m working on the sequel, The Dying of Empires, right now. Part of what inspires me is the topics I’m learning about at the Pardee School in my international relations classes,” Kadavil said. “I hope to eventually write five books in the series.”

At BU, Kadavil is involved with the IR Review, BarMUN, and Bollywood dancing. She also works at the MFA and writes for the Huffington Post.

“My dream is to work on human rights at the Hague, and opportunities I plan to use while at the Pardee School such as study abroad will hopefully help me achieve that,” Kadavil said. “Knowing that I am making a difference in people’s lives is what keeps me going.”