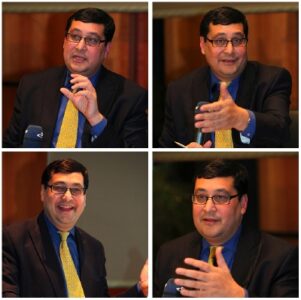 Dr. Adil Najam, Dean of the Frederick S. Pardee School of Global Studies at Boston University and a expert on climate change and sustainable development, has been nominated by the United Nations Secretary General Mr. Ban Ki-moon for re-appointment to the prestigious UN Committee on Development Policy (CDP).

At its annual substantive session for 2015, held in July, the member countries of the UN Economic and Social Council (ECOSOC) voted to accept the Secretary-General’s nominations for the CDP’s 2016-18 term, including the appointment of Dean Najam to the CDP.

Commenting on the announcement, Dr. Najam said that he was “honored at the confidence that the United Nations Secretary General and the CDP has shown in me.” Dr. Najam who was first appointed to the CDP in 2009 while he was the Frederick S. Pardee Professor of Global Public Policy and Director of the Pardee Center and Boston University added that he was particularly humbled because of the history of the committee’s membership which has included some of the most eminent development thinkers of recent times. These have included leading development intellectuals including: Alice Amsden (USA), Ester Boserup (Denmark), Kwesi Botchwey (Ghana), Gamani Corea (Ceylon), Hernando de Soto (Peru), Sakiko Fukuda-Parr (Japan), Mahbub ul Haq (Pakistan), Nurul Islam (Bangladesh), Sir Richard Jolly (United Kingdom), John Lewis (USA), Robert McNamara (USA), Maureen O’Neil (Canada), Sir Shridath Ramphal (Guyana), Klaus Shwab (Germany), do Ernst Simonis (Germany), Frances Stewart (United Kingdom), Lance Taylor (USA), Jan Tinbergen (Netherlands), etc.

The CDP is global group of experts – invited to join in their individual capacity – and convened by the ECOSOC and the UN Secretary General to advise on global development challenges and the economic agenda of the United Nations. The Committee is a subsidiary body of the United Nations Economic and Social Council. CDP provides inputs and independent advice to the Council on emerging cross-sectoral development issues and on international cooperation for development, focusing on medium- and long-term aspects. The Committee is also responsible for reviewing the status of least developed countries (LDCs) and for monitoring their progress after graduation from the category.

The 24 members of the Committee are nominated by the United Nations Secretary-General in their personal capacity. Dr. Najam suggested that issues related to the finalization and implementation of the Sustainable Development Goals (SDGs), emerging trends in international development assistance, the linkages between climate change and human development, and the role of emerging economies in global development will be major points of discussion during this term.