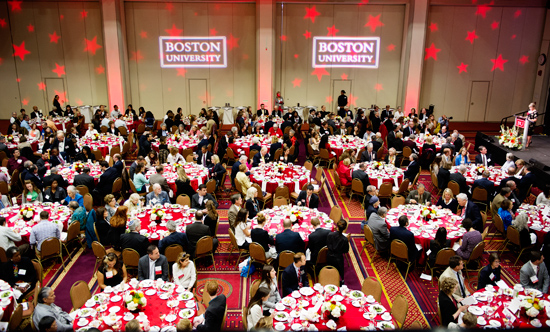 Matt Trevithick, alumnus of College of Arts and Sciences and the Frederick S. Pardee School of Global Studies (BA International Relations, 2008), was awarded the Distinguished Young Alumni Award during Alumni Weekend 2014, for his recent work in Syria, Iraq, Iran and Afghanistan.

Matt is the co-founder and Director of Research at the Syria Research and Evaluation Organization in Gaziantep, Turkey. Previously, he spent four years working as the Director of Communications at the American University of Afghanistan after working for more than a year at the American University of Iraq. Before going overseas, he worked as a writer and researcher at the Woodrow Wilson Center for International Scholars in Washington, D.C., as well as at Georgetown University’s Center for Contemporary Arab Studies.

The award was presented in an impressive ceremony at the Best of BU Luncheon, with more than 300 BU alumni present and the University President, Robert Brown, presiding. Matt’s family accompanied him to the ceremony, where he was asked to make remarks on his work and how BU has influenced his life.

Later in the day Matt Trevithick also spoke as a panelist at a special panel on “The World in Flux: The Changing Face of Security” organized by the BU Frederick S. Pardee School of Global Studies as part of Alumni Weekend 2014.