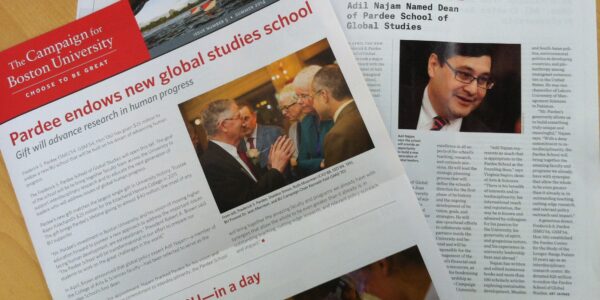 The opening of the Boston Univeristy Frederick S. Pardee School of Global Studies and the generous endowment gift that has made this possible was featured news this week in the new issues of Bostonia (the Alumni magazine of Boston Univeristy) and the newsletter of The Campaign for Boston Univeristy.

The lead feature in the BU Campaign newsletter reports on the $25M gift from Alumni Frederick S. Pardee (SMG ’54, GSM ’54, Hon ’06) that has endowed the new School which will open this Fall:

“The goal of the school will be to bring together faculty from across the University to support interdisciplinary research and to educate the next generation of leaders who will address issues of global human progress.”

The report also announced the appointment of global policy expert Dr. Adil Najam as the inaugural Dean of the Pardee School. This news is the story of a separate feature in the Summer 2014 issue of Bostonia. The story quotes Boston University President Robert A. Brown as well as Provost Jean Morrison commenting on this choice:

“Adil is a wonderful choice for the dean of the Pardee School,” says President Robert A. Brown. “He has the leadership experience and the academic breadth and depth needed to lead the creation of new approaches to interdisciplinary global studies.”

“Professor Najam is well positioned to lead the effort to establish the new Pardee School of Global Studies,” says Jean Morrison, University provost and chief academic officer. “He is a highly regarded scholar with expertise in international environmental and development policy, global governance, and higher education in developing countries.”

In reflecting on the impact of the generous gift from Mr. Pardeem Dean Adil Najam comments:

“Mr. Pardee’s generosity allows us to build something truly unique and meaningful,” Najam says. “With a deep commitment to interdisciplinarity, the Pardee School will bring together the amazing faculty and programs we already have with synergies that allow the whole to be even greater than it already is: in outstanding teaching, cutting-edge research, and relevant policy outreach and impact.”