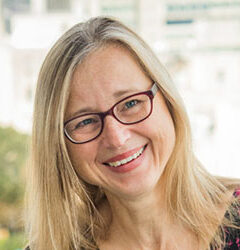 Margrit Betke is a Professor of Computer Science at Boston University, where she co-leads the Image and Video Computing Research Group. She conducts research in computer vision, in particular, the development of methods for detection, segmentation, registration, and tracking of objects in visible-light, infrared, and x-ray image data. She has worked on gesture, vehicle, and animal tracking, video-based human-computer interfaces, statistical object recognition, and medical imaging analysis. She has published over 100 original research papers. She earned her Ph.D. degree in Computer Science and Electrical Engineering at the Massachusetts Institute of Technology in 1995. Prof. Betke has received the National Science Foundation Faculty Early Career Development Award in 2001 for developing “Video-based Interfaces for People with Severe Disabilities.” She co-invented the “Camera Mouse,” an assistive technology used worldwide by children and adults with severe motion impairments. While she was a Research Scientist at the Massachusetts General Hospital and Harvard Medical School, she co-developed the first patented algorithms for detecting and measuring pulmonary nodule growth in computed tomography. She was one of two academic honorees of the “Top 10 Women to Watch in New England Award” by Mass High Tech in 2005. She is a Senior Member of the ACM and IEEE. She currently leads a 5-year research program to develop intelligent tracking systems that reason about group behavior of people, bats, birds, and cells.