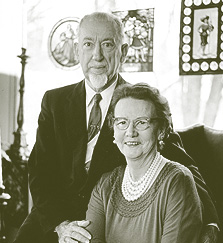 Jessie Logan Muir Boyd Danielsen was born in Scotland on April 8, 1901, and emigrated to the United States as a child with her parents and two brothers. She studied at the State Teachers College in Framingham and earned a bachelor’s degree in education at Boston University. After teaching a few years in Plymouth, Jessie Boyd became principal at the Collicot School in Milton. It was there that she met Albert Danielsen. Always the enterprising salesman, he went personally to meet Miss Boyd after a postcard inquiry from her about some bonds he had advertised.

Albert Danielsen and Jessie Boyd married in 1939 and moved to their lifelong Wellesley home. Their marriage gave Albert the love and intimacy denied him as a child. His wife became his best friend, and their home was a place of hospitality and warmth. As for Jessie, she once said, “I never looked back. Becoming Albert’s wife was the best thing I ever did.”

The couple’s interests and concerns fitted well together, with Jessie providing a framework for Albert’s intensity and a focus for his philanthropy. Both preferred a modest life, and early in their marriage they agreed to live on 10 percent of their income and give away the rest. The extent of their charitable and philanthropic activities remain beyond calculation. Boston University, and especially the Danielsen Institute, benefited from their philanthropy. Jessie Danielsen once summarized their focus: “to help people when they hurt, wherever they are, without blaming or judging.” After her husband died, Jessie Danielsen kept on the course of giving with magnanimity of mind, heart, and spirit.