BtH: Are the Global Poor Getting Richer? 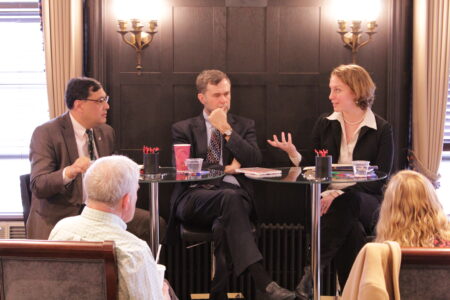 At a February 24, 2016 panel held at the Frederick S. Pardee School of Global Studies at Boston University, experts held a conversation on whether or not the global poverty line is trending upwards. The event was part of the School’s “Beyond the Headlines @BUPardeeSchool” or BtH series.

The panel, entitled “Are the Global Poor Getting Richer?” included Professor of the Practice Steven Radelet, who holds the Donald F. McHenry Chair in Global Human Development at the School of Foreign Service at Georgetown Univeristy, Assistant Professor Julie Klinger of the Pardee School and was moderated by Pardee School Dean Adil Najam.

Radelet, author of The Great Surge, said while the trend is far from universal. there has been a historic drop in global poverty due to factors including decreasing infant mortality rates and fewer civil wars and similar conflicts in developing countries.

“Conflict is way down, instances of civil war in developing countries is only half of what it was 30 years ago,” Radelet said. “If you read the newspapers today about Syria, Sudan, the Central African Republic and Afghanistan, I don’t want to minimize those conflicts, but the number of conflicts is about half of what we had in the 1980s.”

“The question is then who bears the burden, who pays the price for progress,” Klinger said. “Ideally, we will move toward a world where this is a decision that is less arbitrated by the way people are organized according to income, race and gender but at the moment what I do see along with higher incomes, along with greater consumption of consumer comforts, we also see increasing precarity and increasing insecurity.”

Najam said he hopes the Beyond The Headlines @Pardee discussion series becomes a staple for the school, allowing faculty and students to regularly converse with experts on important policy issues.

“I hope these discussions become a regular feature of the Pardee School activities, especially directed at our faculty, colleagues and students to interact with outside guests in a policy-focused conversational mode on issues of great intellectual and policy importance,” Najam said.