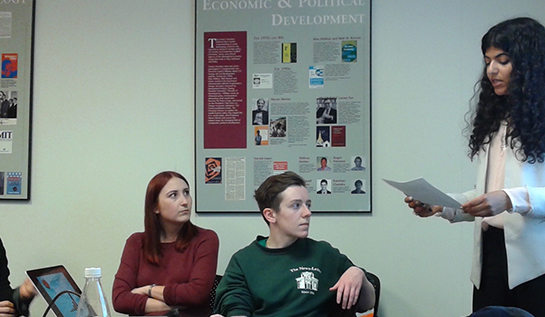 “I am honored to join people whose work I very much respect, but I am mostly excited because I think this will be great for our Forced Migration and Human Trafficking initiative at the Pardee School,” said Lori. “It is beyond an honor and privilege to join this group that I have admired for many years.”

Prior to the invitation, Lori discussed forced migration and human trafficking in a speaking engagement for the Myron Weiner Series on International Migration. Her talk was entitled “Migration, National Security, and New Forms of Policing: Dubai and Abu Dhabi.”

“I discussed the cutting edge technologies in identity management and policing that the UAE has developed in order to manage a population that is overwhelming comprised of guest workers, as 96% percent of the UAE’s domestic labor force is made up of non-citizens,” Lori said.

Students who attended the event had high words of praise for Lori.

“As a lawyer and researcher interested in forced migration I highly value Prof. Noora Lori’s insight,” said Yoana Kuzmova, Pardee ’15. “Her presentation highlighted how the appetite for technological and institutional innovations in policing in the UAE impacts local-migrant relations, while further emphasizing the Emirates’ traditional values, existing in a unique context where only 12% of the total population is made up of citizens.”

Since its establishment in 1974, the Inter-University Committee on International Migration has been a focal point for migration and refugee studies at member institutions. During each academic year, the Committee sponsors the Migration Seminar Series, held at MIT’s Center for International Studies. The seminars explore factors affecting international population movements and their impact upon sending and receiving countries and relations among them.

Lori’s research broadly focuses on the political economy of migration, the development of security institutions and international migration control, and the establishment and growth of national identity systems. Learn more about her here.