A compilation of major past events hosted by WLL. Check out our WLL Events Calendar for an interactive view of Culture Pass and other World Languages & Literatures events.

Theme for 2022: Envisioning the Future of Learning and Teaching Languages, Literatures, Cultures, and Cinema

Details of the conference can be viewed here

A multi-departmental conversation regarding Thomas Mann’s novella and its continuance. and the fifth in the Department of World Languages & Literatures’ BIG FAT BOOKS series on major works of world literature.

Information for the event can be found here

Lectures were held both in person and on Zoom

Click here to view the details of each lecture

Theme for 2021: Kinship, Sexuality, and Emotions

Click here to view the details of each lecture.

The Chinese program hosted The 8th New England Chinese Language Teachers Association’s Annual Conference on October 5th, 2019. The conference was a big success, with more than 60 presentations and over 150 participants. Click here to view more information about this event.

WLL Russian Program at Boston University will host the Annual International Dostoevsky Symposium in Boston with the support of universities in the surrounding area. The Symposium will celebrate 150 years of The Idiot, with a focus on new and multidisciplinary approaches to the novel.

Please click here to view more information about the event.

May 5. 33rd annual conference of the Japanese Language Teachers’ Association of New England

The Japanese Language Program hosted the 33rd annual conference of the Japanese Language Teachers’ Association of New England here at Boston University. Many Japanese language educators from all over North America got together to exchange innovative pedagogical ideas. The keynote speaker was Professor Shigeru Miyagawa, Professor of Linguistics and Online Education Specialist at MIT.

View the JLTANE website for more information about this past conference.

April 27. Seeking a Future for East Asia’s Past: A Workshop on Sinographic Sphere Studies.

Co-sponsored by the Boston University’s Center for the Humanities, the Center for the Study of Asia, Department of World Languages and Literatures, and the College of Arts and Sciences. This workshop presented a day of visionary brainstorming with students and scholars articulating the future of their mission to recapture the region’s shared past in a divisive present.

Click here to be brought to the main conference webpage.

ON SELLING ONE’S SOUL, a day of cross-disciplinary conversation on the vicissitudes of the Faust legend and the third in the Department of World Languages & Literatures’ BIG FAT BOOKS series on major works of world literature.

The Department of World Languages & Literatures (WLL) at Boston University, with support from BU Center for Humanities and the Geddes Language Center, Institute for the Study of Muslim Cultures and Civilizations, and Center for Teaching and Learning, hosted the Boston Area Pedagogy Conference held on Friday, March 22, 2019,

Translation Now celebrated the fortieth anniversary of the Seminar by bringing to Boston some of the most distinguished translators and scholars in the field today.  The conference began with a keynote address by Rosanna Warren, who gave the Seminar its current shape and taught it until 2012. Professor Warren’s keynote was followed by a series of moderated conversations on key issues in literary translation.

WLL read The Brothers Karamazov together as a department. Click here for information about this conference.

This conference is co-organized by Boston University and the International Network for the Study of Lyric (INSL), a nonprofit association of scholars interested in the theory of poetry. The purpose of the INSL is to promote and encourage the interdisciplinary study of poetry, lyric and verse in various languages, forms, media, and functions.

For more information about the conference, please click here.

Free and open to the public!

Our symposium focused on the changing relationship that literary and historical texts and paintings had to Persian cosmopolitan models in the sixteenth to eighteenth centuries, and how they themselves became starting points for distinctive traditions that drew inspiration from local and regionally-specific cultural practices, including the non-courtly. We also examined the ways in which vernacular production in turn transformed Persian culture

Haiku is perhaps the best travelled of all world literary genres. Since the seventeenth century, when Matsuo Bashō wrote his masterpiece, The Narrow Road to the Deep North, haiku poets have embarked on countless figural and literal journeys, and they have taken the genre with them. By the eighteenth and nineteenth centuries, dense social networks of haiku poets crisscrossed the whole of Japan, and by the early twentieth century, haiku in its modern form had spread across the globe through the work of poets including Ezra Pound, Rabindrath Tagore, Frederico Garcia Lorca, and Yu Ping Bo. Today millions of people write haiku in Japanese and dozens of other languages.

This symposium marks the 150th anniversary of the birth of the haiku poet Masaoka Shiki (1867-1902). Despite spending the last seven years of his life immobilized by tuberculosis, Shiki contributed more than any other poet to the genre’s emergence as a globe-trotting literary form. Scholars and poets working on haiku in Japanese, English, Persian, Chinese, and Spanish shared their work on Shiki and on the poetics of haiku in its global dimensions. 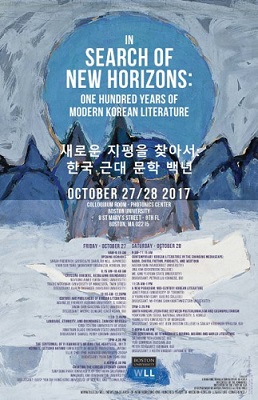 Click Here to view the event schedule and more information about the conference.

WLL faculty members shared their research in progress with students and fellow colleagues. The full event agenda and abstracts can be found on the event’s main page.

BU faculty from WLL, Art History, English, and Romance Studies joined together on November 5th, 2016 for an interdisciplinary symposium celebrating a new translation of on the world’s first novel written by a woman: Lady Murasaki’s 11th century Tale of Genj.

Click here to see more information about this event.

WLL faculty members shared their pedagogical methods with students and fellow colleagues. The event video, agenda and abstracts can be found on the event’s main page.