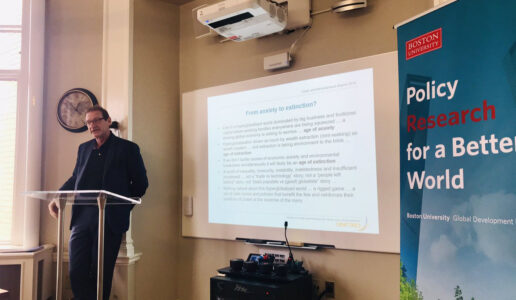 Richard Kozul-Wright, Director of the Division on Globalization and Development Strategies at the United Nations Conference on Trade and Development, gave a presentation launching the report to the Boston University community.

“If we don’t deal with debt relief, we can forget about SDGs in most developing countries,” Kozul-Wright said, discussing the 2019 Trade and Development report.

Follow the live stream above as Richard Kozul-Wright, Director of the Globalisation and Development Strategies Division @UNCTAD, presents the latest Trade & Development Report.

“If we don’t deal with debt relief, we can forget about SDGs in most developing countries” pic.twitter.com/B2Brh7yZBs

From the foreword to the report, written by Mukhisa Kituyi, Secretary-General of UNCTAD:

The deep and widespread economic and social damage caused by the global financial crisis has been followed, in most advanced economies, by a decade of austerity, sluggish productivity growth and stagnant real wages. Growth has also slowed in most developing countries, albeit with considerable variation across regions. The struggle to create good jobs has intensified, with rapid urbanization, premature deindustrialization and rural stagnation accompanying rising inequality and growing political tensions.

Everywhere, anxiety over the prospect of increasing economic insecurity is compounded by the impending threat of environmental breakdown. The Intergovernmental Panel on Climate Change has recently raised the stakes by starting the clock on a climate meltdown; but a shortening time horizon is just part of a growing recognition of a wider and deeper ecological crisis.

Efforts to address these challenges have aligned around a series of goals and targets, which the international community agreed in 2015, to ensure an inclusive and sustainable future for all people and the planet. But with little more than a decade left to achieve Agenda 2030, meeting these goals has already fallen behind schedule and there is broad agreement that what is now required is a coordinated investment push on an unprecedented scale and across the entire global commons. The financing numbers are daunting, from “billons to trillions”, requiring an additional 2.5 trillion dollars a year, just in developing countries, on UNCTAD estimates.

You can view the full report here. Watch the entire launch event below:

The GDP Center is a university-wide research center in partnership with the Office of the Vice President and Associate Provost for Research and the Frederick S. Pardee School of Global Studies. The GDP Center’s mission is to advance policy-oriented research for financial stability, human well-being, and environmental sustainability.