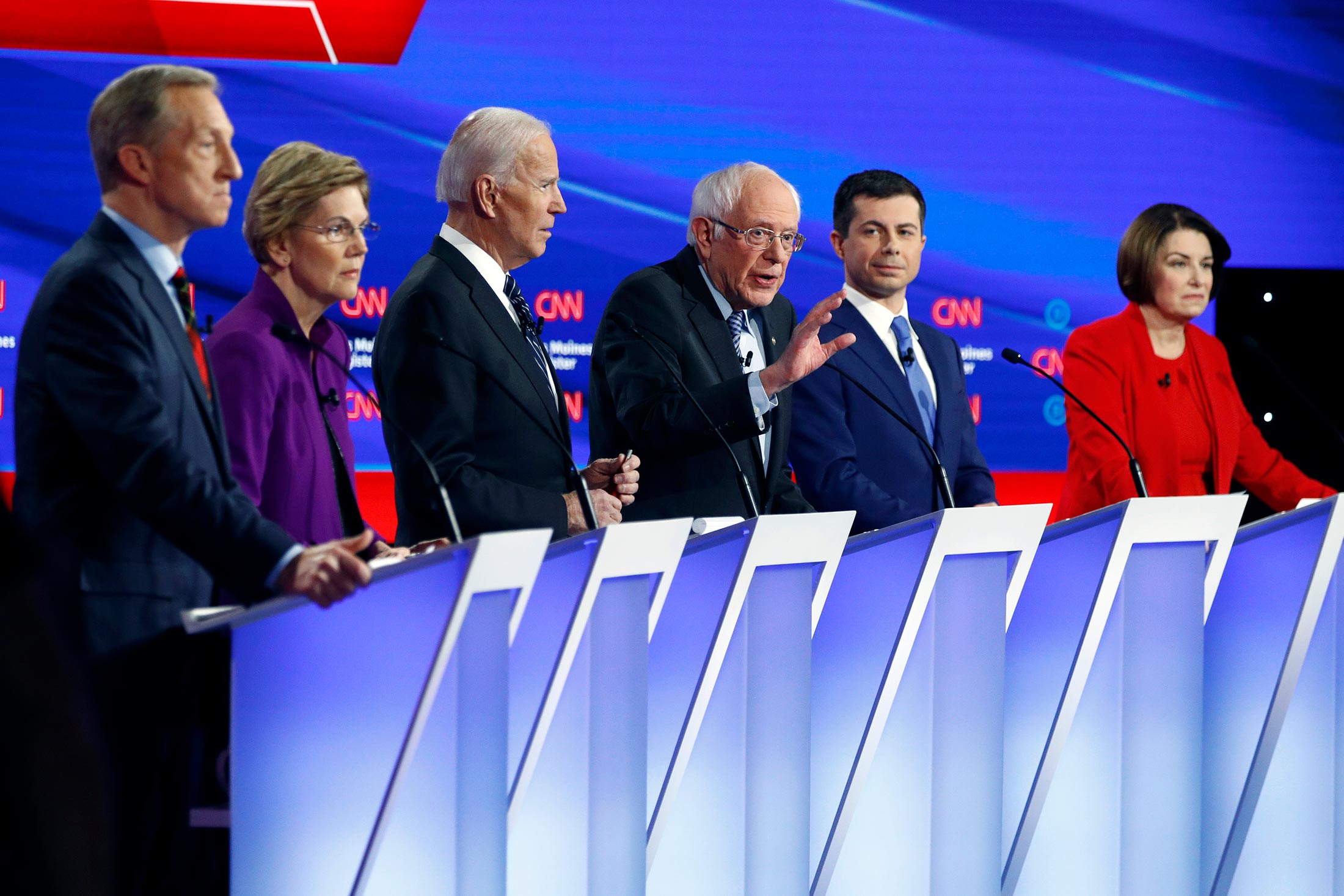 Sam Deese has a vision for the future, one without our current reliance on fossil fuels, with a comprehensive global-scale Green New Deal, and where world leaders work together to create a sustainable global economy.

“We can help people economically and create a greener economy at the same time,” says Deese, a research historian and Boston University College of General Studies senior lecturer in social sciences who is an expert on global environmentalism. “And if we’re really going to put a price on carbon and incentivize energy that is not from fossil fuels, then we’re ultimately going to have to do it on a global scale.”

With the 2020 presidential campaign in full swing, so is the conversation about how the US can usher in a new era of climate action and leadership to help get humanity back on track for meeting critical climate mitigation needs.

In his book Climate Change and the Future of Democracy, Deese argues that the climate crisis requires a democratic, global response. But that’s threatened by the resurgence of nationalism we’re seeing at home in the United States and abroad, undercutting the international collaboration that will be required  to cut back greenhouse gas emissions dangerously heating the planet.

“All of [the Democratic candidates] seem to have their heart in the right place about this,” Deese says. “I’ve been comparing their statements on climate change, and it seems that all of them are committed to a carbon neutral United States by 2050 with different approaches to getting there.”

Deese sat down with The Brink to talk about which proposed policies show the most potential for catalyzing real changes. When comparing the candidates, Deese says, he considers whether they can get elected and whether they could advance, at the very least, incremental change to set the United States back in forward motion toward achieving carbon neutrality.

“For climate change, incremental change is not enough, but that incremental change is better than no change or going backwards, which is what we’re currently doing,” Deese says, referring to the Trump administration’s sweeping environmental protection rollbacks and removal of the US from the 2015 Paris Climate Agreement.

Here are the Democratic candidates Deese believes could have the most positive impact:

Deese says the top climate policy candidate is Senator Elizabeth Warren, for her precise plan to decarbonize the US military.

By his own observations, Elizabeth Warren talks much more about reducing the carbon footprint of the US military—one of the worst polluters in the world—than her running mates. “That’s very promising to me, because a president, as commander-in-chief, could make a lot of headway in [demanding] reduction of [military] carbon [emissions],” Deese says.

Ironically, the part of the government that protects us from national security threats is making the threat of climate change even worse. (Another Boston University researcher, professor of political science Neta C. Crawford, estimates that the Pentagon consistently makes up 77 to 80 percent of the entire US government’s greenhouse gas emissions.) So, reducing emissions and incentivizing green technology could spur military contractors to invest in developing cleaner technologies for air, sea, and land transport, which would likely have a trickle-down effect on civilian applications as well.

“The US military is an extraordinarily large part of the federal budget and that’s unlikely to change in the near future,” Deese says. “This is a place a president could make a big impact.”

Warren’s plan for the military to combat climate change, which is one piece of her climate plan, calls for the Pentagon to achieve net zero carbon emissions for all its non-combat bases and infrastructure by 2030, along with imposing a fee on government contractors that have not achieved net zero carbon emissions by that time. Then, Warren says she would use that money to invest more in climate change preparedness.

Such a move would remind Deese of another historic moment. In 1948, using executive power to abolish discrimination in the armed forces, “President Harry Truman desegregated the military with his pen, you know? I really like [Warren’s] emphasis on the military because a president could do it,” he says. “Her plans are more precise than the others proposed.”

Deese picks Senator Bernie Sanders’ plan as a runner-up to Warren’s, for its sweeping ambition.

Sanders’ climate policy calls for achieving 100 percent renewable energy for electricity and transportation by 2030, as well as complete decarbonization of the economy by 2050, which he says will create 20 million green jobs, and require massive investments in public transit. His plan has received praise from the climate activist community, but has also raised eyebrows for being the most expensive plan to tackle climate change, priced at $16 trillion.

Because Congress is already so divided, Deese says Sanders’ particularly polarizing language could make it an especially uphill battle for him, versus some other more moderate candidates, to enact greener policies.

“The presumption is that he could do what he’s talking about if there was a landslide election and if he had a filibuster-proof majority in the Senate,” says Deese. “His trademark rhetoric about ‘revolution’ promises a level of change that could only happen if the make-up of both the House and Senate were considerably different than they are right now. The other candidates are more inclined to present themselves as deal makers, implying that they could compromise with legislators on both sides of the aisle.”

“Another thing that I look for when comparing the climate policies is whether they are prepared to use the phrase carbon tax,” Deese says. He has noticed that Buttigieg appears more willing to use that phrase compared to other front running candidates. “He talks about tax and dividend, which is the same idea that climate scientist James Hansen proposed years ago,” he says, referring to Hansen’s appearance before Congress in 1988 to testify, for the first time in US history, that global warming is attributed to human activity. Hansen has advocated for taxing carbon ever since.

According to the YPCCC report, a majority of registered voters favor these kinds of policies, which would require fossil fuel companies to pay a carbon tax to offset their emissions output. The federal government would then use the money to reduce other taxes by an equal amount. Part of Buttigieg’s proposal for creating a clean energy economy includes an economy-wide tax on carbon emissions, redistributing that money back to the public.

“It’s using the tax authority of the government to price greenhouse gas emissions to the economy and therefore it more accurately reflects the cost of activities that put greenhouse gases in the atmosphere,” says Deese. He says the pricing of greenhouse gas emissions is an incredibly valuable number for the United States and other governments to determine—and soon.
Deese also says he’s impressed with Buttegieg’s idea of convening US mayors to collaborate on local strategies to combat climate change. “Policies set by municipalities can have a huge impact on transit and energy use,” he says.

Although Deese admires Senator Amy Klobuchar for emphasizing the needs of rural America, her climate policy is much less aggressive than her competitors.

“I admire Amy Klobuchar for talking about energy initiatives that benefit people in rural American,” Deese says. “A lot of rural America has been neglected for 20 years and that’s part of what gave us Trump.”

Klobuchar’s plan calls for preserving farmlands, reducing dangers posed from flooding, and keeping air and water clean, as a part of a plan to achieve net-zero carbon emissions by 2050. But altough she is a cosponsor of the Green New Deal resolution alongside Sanders and Warren, she has veered away from using it to guide her own climate proposal.

Deese also points out that many debate watchers were not a fan of her proposal to use natural gas as a means to transition away from coal. “But one reason we’re burning less coal in the United States is because of natural gas,” he says. So, perhaps it would still be an incremental step in the right direction.

“Her focus on green initiatives that would benefit people in rural counties is essential. And an emphasis on rural America as part of the Green New Deal is very important,” Deese says.