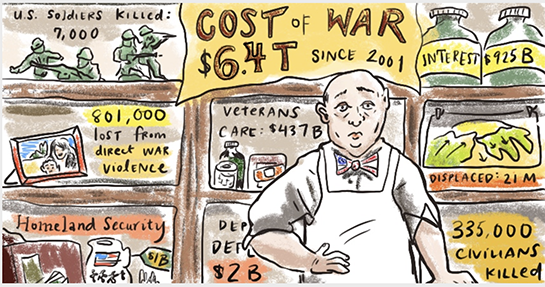 Shamiran Mako, Assistant Professor of International Relations at the Frederick S. Pardee School of Global Studies at Boston University, was recently interviewed on WBUR’s Radio Open Source on January 16, 2020, on the costs of war.  In the special episode on the subject, Prof. Mako was joined by other Boston University colleagues Professors Neta Crawford and Rosella Cappella Zielinski (Political Science) and also by Linda Bilmes from the Harvard Kennedy School and 2020 Presidential candidate Tulsi Gabbard (more here)

Mako was interviewed by Christopher Lydon for the January 16, 2020 episode entitled “The Cost of War.” You can listen to the podcast below.

Shamiran Mako’s research and teaching interests lie at the intersection of international relations and comparative politics with a focus on authoritarianism, civil wars, democratization, institutional capacity building, governing in divided societies, and American foreign policy with a regional interest on the Middle East and North Africa. Specifically, she explores the historical and contemporary drivers of inter and intra-state conflicts that produce weak and fragile states and examines ways in which successful conflict mitigating strategies relating to post-conflict state and peacebuilding can be applied to states in the MENA region