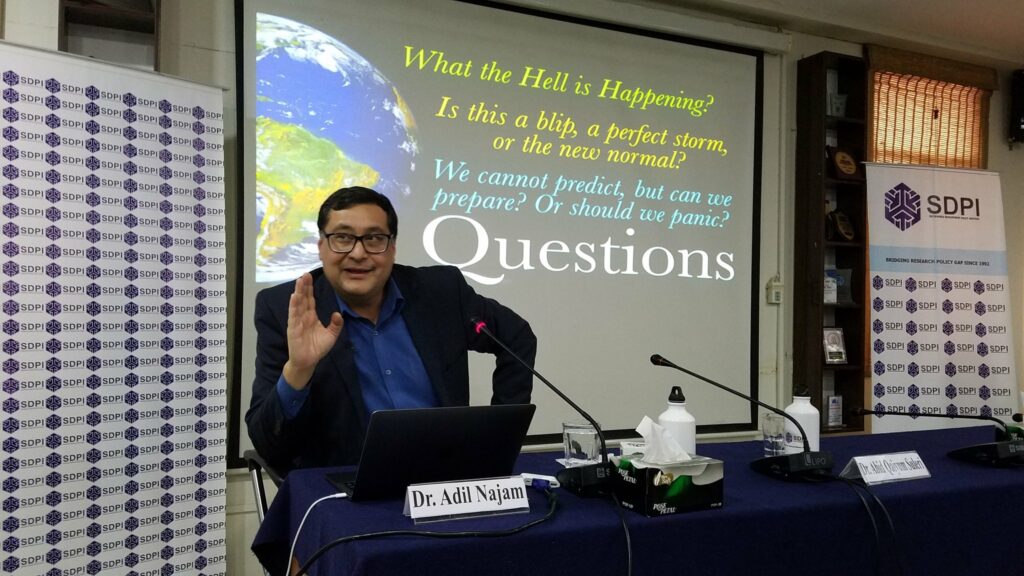 Prof. Adil Najam, Dean of the Pardee School of Global Studies at Boston University, presented the 2002 Distinguished Lecture at the Sustainable Development Policy Institute (SDPI) in Islamabad, Pakistan, on January 2, 2020, titled “The World in 2020: An Update on the New World Disorder.”

The lecture looked at the world beyond 2020 and argued that it is defined by uncertainty and turbulence. According to Najam, “everyone is sure that ‘something’ is about to happen; but no one has any idea what that ‘something’ might be.” The lecture was widely covered in the national print and electronic media, here is an excerpt from one news report about the lecture, published in The Express Tribune (January 3, 2020):

On changing global dynamics and tectonic shifts in power, Dr Najam said that the world is seeing the rise of anti-politics where, unfortunately, politics is being portrayed as a dirty word and dirty business by all segments of society, including the media, intellectuals, academics, and even politicians.

“This is bad for society as a whole,” he argued, adding that there is no longer any difference between different ideologies such as left- and right-wing political ideologies in what he termed as the ‘new world disorder’.

The lecture built on an essay Prof. Najam had originally written in 2017, and has updated, built upon and elaborated since.

The same type of turmoil that shifted the world circa 1913 is being witnessed again over a 100 years later. The turmoil of ideas that happened then is on the cards now!! @AdilNajam pic.twitter.com/mj5rvwClhS

Adil Najam is the Inaugural Dean of the Frederick S. Pardee School of Global Studies at Boston University and former Vice Chancellor of the Lahore University of Management Sciences (LUMS), in Pakistan. More on him here.