Faculty Book Talk: Stern on ISIS and the State of Terror 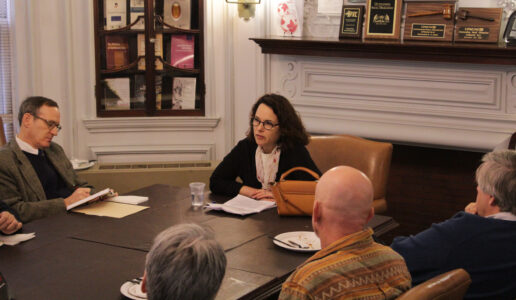 Jessica Stern, Research Professor at the Frederick S. Pardee School of Global Studies at Boston University, discussed her book ISIS: The State of Terror as part of the 2016-2017 Faculty Book Talk Series on December 5, 2016.

The event was attended by Pardee School faculty and students and included a talk by Stern on the Islamic State  and how world leaders should prioritize and respond to ISIS. Stern’s talk was followed by a question and answer session with students and faculty.

In ISIS: The State of Terror, which is co-authored by J.M. Berger, Stern dissects the new model for violent extremism that the Islamic State, known as ISIS, has leveraged into an empire of death in Iraq and Syria, and an international network that is rapidly expanding. Stern offers a much-needed perspective on how world leaders should prioritize and respond to ISIS’s deliberate and insidious provocations in this compelling, essential account.

Stern discussed the significance of recent gains made against ISIS in both Syria and Iraq, and what these gains mean for the fight against terrorism in the Middle East and in the West.

“ISIS has in fact been pushed out of Dabiq which is important symbolically,” Stern said. “It’s a town in Syria where ISIS believed an apocalyptic battle would take place. We have no idea how many operatives actually believe that, but it was symbolic when they took Dabiq and it’s symbolic now that it’s been taken from them.”

Stern said that while gains are being made in terms of pushing ISIS out of strategic strongholds in Syria and Iraq, many of the problems associated with the terrorist organization will remain after they pushed out of these areas.

“We can predict that pretty soon ISIS will be pushed out of Mosul and eventually Raqqa, but what does this mean in terms of terrorism both in the region and also to us in the West,” Stern said. “When ISIS is pushed out of Mosul and hopefully Raqqa the situation will be very much like what we saw when ISIS predecessor organizations were temporarily defeated. All the risk factors for terrorism will remain.”

According to Stern, said one of the most important steps in fighting ISIS and similar terrorist organizations will be the emergence of a Syrian leader who protects religious minorities.

“We can predict that while it will be an important step in the fight against these organizations, it’s not going to fix the problem,” Stern said. “We will still see the continued fighting in Syria until they find a way to put a leader in place who will protect minorities and be effective at protecting religious minorities.”