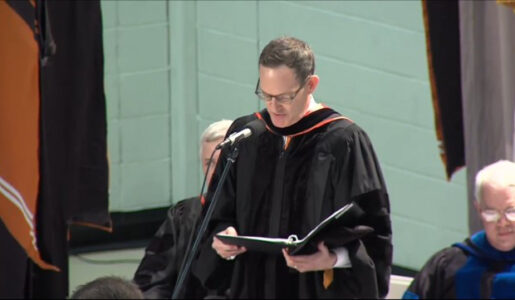 John D. Woodward, Jr., Professor of the Practice of International Relations at the Frederick S. Pardee School of Global Studies, participated in the 163rd commencement exercises of Waynesburg University on May 1, 2016.

Woodward, a Waynesburg University trustee, introduced D. Raja, the commencement speaker, who received an honorary doctorate of humane letters. Raja is an accomplished entrepreneur who launched his own consulting and project management practice in 1992, a venture that was to become Computer Enterprises, Inc. He is also active in Pittsburgh politics and hosts a popular weekly radio show.

“Raja’s strong ambition, influential career, and moral and business philosophies serve as examples to students as they prepare to become the leaders and scholars of tomorrow,” Woodward said. 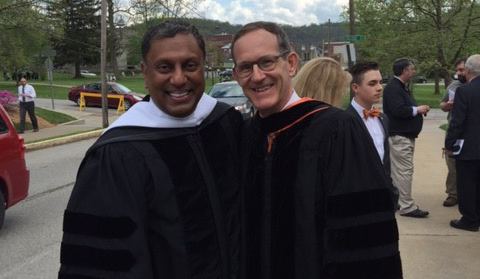 Founded in 1849, Waynesburg University is an institution of higher learning with an undergraduate enrollment of 1,500, located in southwestern Pennsylvania, near Pittsburgh.

John D. Woodward, Jr. is a former Central Intelligence Agency (CIA) officer. During his twenty-year CIA career, John served as an operations officer in the Clandestine Service and as a technical intelligence officer in the Directorate of Science and Technology, with assignments in Washington D.C., East Asia, Africa, South Asia, and the Middle East. You can read more about him here.