GEGI: Morris on US Reaction to AIIB 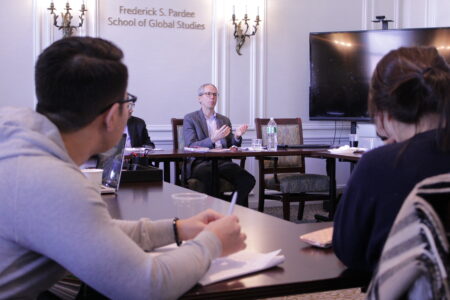 At a lunch discussion on February 12, 2016 the  Global Economic Governance Initiative (GEGI) hosted Scott Morris, senior fellow at the Center for Global Development, at the Frederick S. Pardee School of Global Studies for a discussion on the relationship between the Asian Infrastructure Investment Bank (AIIB) and the United States.

Morris works on issues related to the International Financial Institutions (IFIs) and particularly the relationship between the IFIs and the United States. Morris served as deputy assistant secretary for development finance and debt at the US Treasury Department during the first term of the Obama Administration.

Kevin Gallagher, GEGI Co-Director and Professor of Global Development Policy at the Pardee School , said the wide range of experience Morris has made his insight on multilateral development banks particularly valuable.

“Scott has had the opportunity to work in and around financial development policy from a variety of angles,” Gallagher said.

Morris said the shock by US financial leaders at the creation of the AIIB, along with many US allies joining the organization, drew much attention by financial media and among experts in the field.

“In the end, the creation of the AIIB itself should not have been seen as such a shock and the US should not have reacted as it did, with such petulance, but it became what it did where a lot of meaning was projected onto it because of the US reaction, because of the decision of so many countries including key US allies to join it and in that way it does resonate and cause people like me to write papers about it,” Morris said.

While remaining skeptical of the US reaction to the creation of the AIIB, Morris said there are negative aspects to multilateral development banks that cause US financial leaders to have a cautious approach to the organizations.

“I tend to think these institutions do better projects overall than other actors, but things do go wrong,” Morris said. “They finance projects that go badly. rules are violated, the environment is harmed, people are harmed. When that happens it resonates in Washington. There are political consequences in Washington. Through a series of those instances over many years, the mindset of our engagement with the institutions is much more around stopping the bad stuff than promoting the good stuff.”

Gallagher is the co-chair of the Task Force on Regulating Capital Flows and has served as an advisor to the Department of State and the Environmental Protection Agency in the United States, as well as to the United Nations Conference on Trade and Development. Learn more about him here.