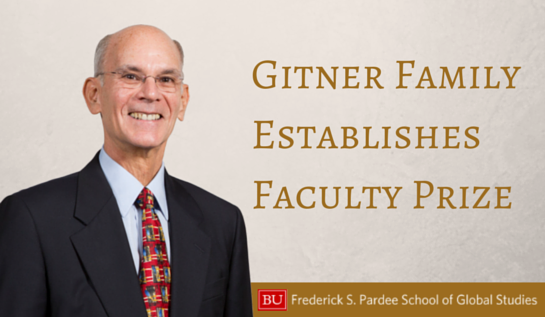 In continuing generosity to Boston University, alumnus (CAS ’66) and Trustee Emeritus (1984-96) Gerald L. Gitner and his wife Deanne have established the Gerald and Deanne Gitner Family Prize for Excellence Fund at the Frederick S. Pardee School of Global Studies at Boston University.

The permanently endowed fund, to be administered by the Dean of the Pardee School, will support an annual ‘Gitner Prize’ to be awarded to a faculty member in the Pardee School of Global Studies who best exemplifies and embodies the School’s mission to ‘advance human progress.’

The Gitner family has endowed multiple programs at Boston University including the Gerald and Deanne Gitner Family Award for Innovation in Teaching with Technology, the CAS Gitner Award for Distinguished Teaching, the Gitner History Prize, and the annual Gitner Family CAS Lecture.

Commenting on this, the Gitner family’s newest initiative at Boston University, Mr. Gitner reaffirmed his belief that”faculty excellence lies at the heart of all aspects of excellence at a university.” He added, “We hope that the Prize will be one more source of encouragement to the Pardee School faculty to contribute even more to actualizing the very important mission of the School – advancing human progress.”

Dean Adil Najam of the Pardee School thanked the Gitner family for their support saying, “this is a most welcome and gracious endowment gift for the new Pardee School. It will not only allow us to celebrate faculty excellence but is an important recognition of, and investment in, the mission of our new School.” Moreover, he added, “we at the Pardee School are committed to the very highest standards of excellence in teaching and student mentoring. The Gitner Prize has given us a worthy vehicle of celebrating such excellence amongst our faculty.”

Dean Najam said that the first Gitner Prize will be awarded this year – the inaugural year of the School – during the 2015 Commencement exercises.