News of the extended network of faculty, alumni, students, visiting researchers, and mission partners is regularly updated, and some of the big ideas or major events in Global Christianity are covered in the CGCM News.

New Book: A History of West Central Africa to 1850 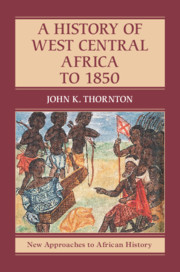 In his latest book, John Thorton has done substantial new research in primary sources and archives, to create an accessible interpretative history of West Central Africa from earliest times to 1852. He gives comprehensive and in-depth coverage of the region with equal focus given to both internal histories or inter-state interactions and external dynamics and relationships. This study represents an original approach to regional histories which goes beyond the existing scholarship on the area. By contextualising and expanding its range to include treatment of the Portuguese colony of Angola, John K. Thornton provides new understandings of significant events, people, and inter-regional interactions which aid the grounding of the history of West Central Africa within a broader context. A valuable resource to students and scholars of African history.

In his new book, The Split Economy, Nimi Wariboko looks closely at the ethical challenge of capitalism. Others have named injustice, inequality, repression, exploitative empires, and capitalism’s psychic hold over all of us, as the central problem. Nimi Wariboko instead argues that the core ethical problem of capitalism lies in the split nature of the modern economy, an economy divided against itself. Production is set against finance, consumption against saving, and the future against the present. As the rich enjoy their lifestyle, their fellow citizens live in servitude. The economy mimics the structure of our human subjectivity as Saint Paul theorizes in Romans 7: the law constitutes the subject as split, traversed by negativity. The economy is split, shot through with a fundamental antagonism. This fundamental negativity at the core of the economy disturbs its stability and identity, generating its destructive drive. The Split Economy develops a robust theoretical framework at the intersection of continental philosophy, psychoanalytic theory, theology, and political economy to reveal a fundamental dynamic at the heart of capitalism. 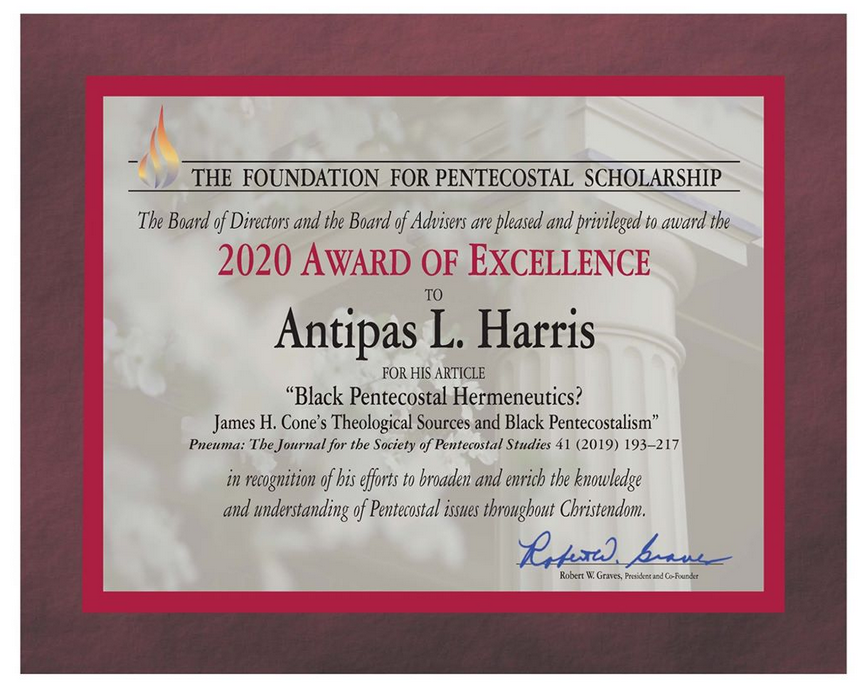 March 15, 2020 was Rev. C. K. Athialy's birth centenary day. He was the pioneering Indian missionary in Nepal. To honor his life, a thanksgiving meeting was planned in Nepal, but has been postponed due to the rapid spread of the coronavirus. Rev. C. K. Athialy's son, Jesudas Athyal, has been a Visiting Researcher at the CGCM and with his family produced a short documentary of his father's life. The video also features Bishop Abraham Mar Paulos, who earned his doctorate at the Boston University School of Theology in 1993.

By driFebruary 3rd, 2020in Announcements, Call for Papers, World Christianity

Paper proposals with brief abstracts of 250-300 words should be submitted via email by March 6, 2020 to the Conference Administrator, Jessie Fubara-Manuel at cswc-events@ed.ac.uk. Please include your name, the name of your institution, and the title of your proposed paper at the top of the document.  Description for the conference theme is available at http://divinity-adhoc.library.yale.edu/Yale-Edinburgh/2020theme.htmand papers should focus on the theme.

Registration for the conference and payment of the conference fee of £90.00 should be completed by March 30, 2020 through the ePay online portal at (http://bit.ly/YaleEd2020).  Paper presenters are expected to complete the registration and payment process as a demonstration of their commitment to attend the conference.  Details for accommodation are available on the ePay portal.  Once you have registered, you will receive further communication.

Please note that space for the conference is limited to 90 participants. If you plan to attend, please register at your earliest convenience. Queries regarding conference registration and submission of abstracts should be sent to Jessie Fubara-Manuel at cswc-events@ed.ac.uk and to Jean Reynolds at J.Reynolds@ed.ac.uk for booking accommodation.

In the summer of 2019, Colombia was a place of significant convergence for people of faith and people of conscience who are concerned about issues of human rights, nonviolence and conflict transformation. In early July, the Baptist Peace Fellowship held an international gathering in the Colombian city of Cali. In late July and early August, Bogota was the site for additional international gatherings. Chris Ney was privileged to attend the meetings in Bogota as part of his continuing education.

War Resisters’ International, a 98-year-old pacifist organization based in London, organized a conference called, “Antimilitarism in Movement.” From July 30-August 1, 300 peace workers gathered to share experiences, insights, and resources.  While many of the participants came from Colombia and other Latin American nations, but representatives from places as diverse as West Papua, Ambizonia (a region in Cameroon), Palestine, Western Sahara, England, Holland, and more.

In addition to plenaries and workshops, conference participants interacted with each in working theme groups that gathered under the headings, “just peace,” “sustainable peace” and “diverse peace.” The three work groups examined and developed program ideas that relate to the intersection between peace and issues of human rights, the environment, and culture.  Over the course of three days, we heard reports about the occupation of territories, the work of human rights workers, and the power of nonviolence to mobilize diverse communities.

Prior to the WRI meeting, a smaller, yet historic consultation took place. For the first time, two international nonviolence networks representing activists from the global south, met for the first time. The Latin American network, Servicio Paz y Justicia (Peace and Justice Service or SERPAJ), founded in 1974 by Argentine Adolfo Perez Esquivel met with the Pan African Nonviolence and Peace Building Network (PANPEN), a network of peacemakers representing thirty nations across the continent of Africa.  It was an honor to hear stories of nonviolence from places that are often ignored.

An awareness of the situation in our host country, Colombia, ran through many of these international encounters. Colombia has been known as the site of the longest running civil war in the Western Hemisphere, and one of the most intractable conflicts in the world. But a peace treaty signed in January 2016 by the government and the largest rebel group created hope for an end to the violence.

One of the highlights of the trip to Colombia was the opportunity to learn about the work of JUSTAPZ, a faith-based organization dedicated to conflict transformation. Founded by the Mennonite Church of Colombia in 1990, JUSTAPAZ is a mission partner of the UCC. Their Executive Director, Martín Nates, spoke to the SERPAJ-PANPEN meeting, offering a critique of the implementation of the peace accords and expressing concern about the ongoing violence against leaders of community organizations. Later, I was invited to visit the JUSTAPAZ office to learn about their work with churches and rural communities—workshops on conflict transformation, documentation of human rights violations, and communication by print and radio to reach larger audiences.

On a personal level, these conferences gave me the opportunity to spend time with old friends in the peace movement and even to offer workshops on a Chilean human rights movement. I’m grateful to have had this opportunity.

The Future of Religion and Mission

The Center for the Study of Global Christianity (CSGC) at Gordon-Conwell Theological Seminary invites you to an exclusive conference to celebrate the launch of the third edition of our seminal work, the World Christian Encyclopedia (Edinburgh University Press).

The conference will feature:

The Past and Future of Evangelical Missions 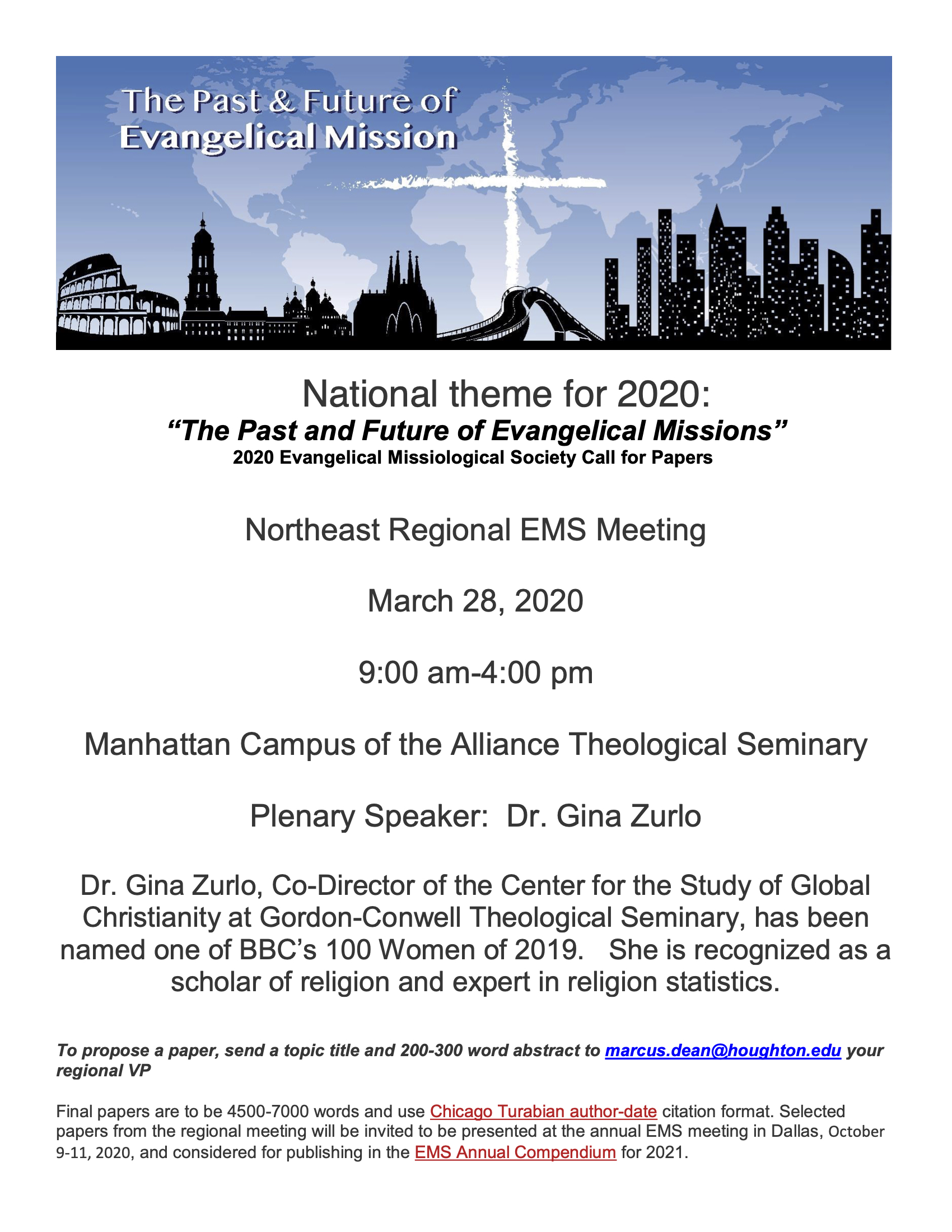 One of the challenges of global history is to bridge the particularities of individual lives and trajectories with the macro-historical patterns that develop over space and time. Italian micro-history, particularly popular in the 1980s–1990s, has excavated the lives of small communities or individuals to test the findings of serial history and macro-historical approaches. Micro-history in the Anglophone world has instead focused more on narrative itself, and has shown, with some exceptions, less interest for ampler historiographical conclusions.

Sino-Western interactions in the early modern period offer a particularly fruitful field of investigation, ripe for a synthesis of the global and the micro-historical. Cultural, social, and economic phenomena can be traced in economic and statistical series, unpublished correspondence, and other non-institutional sources, in part thanks to the survival of detailed records of the activities of East India companies and missionary agencies in China. Recent scholarship has started to offer new conclusions, based on such Western records and matching records in the Chinese historical archive.

In this article, Eugenio Menegon offers a methodological reflection on ‘global micro-history’, followed by four micro-historical ‘vignettes’ that focus on the economic and socio-religious activities of the Roman Catholic mission in Beijing in the long eighteenth century. These fragments uncover unexplored facets of Chinese life in global contexts from the point of view of European missionaries and Chinese Christians in the Qing capital—‘end users’ of the local and global networks of commerce and religion bridging Europe, Asia, Africa, and South and Central America.

The Habit that Hides the Monk