Gillian Atherstone and Duncan Wylie have compiled many striking photos of Zimbabwean religious life in a new book entitled Zimbabwe: Art, Symbol and Meaning. The book seeks to preserve religious practices, philosophy, and a way of living which is rapidly passing away. The photography work of CGCM co-founder Dr. Inus Daneel, showcased in one of the CGCM digital projects entitled Old and New in Shona Religion, is an important component of Atherstone's work.

Support Atherstone's project by pre-ordering a copy of the book, or contributing to the project's crowdfunding page.

Learn more about the images curated in this new publication, and watch this video in which Atherstone describes her work with the N'angas, or spirit mediums, in Zimbabwe.

In the most recent issue of focus, the STH alumni magazine, Dr. Casely Essamuah ('03) describes the trajectory of his life and calling thus far. Growing up as a child of a Ghanaian Methodist minister, Essamuah went on to study at Harvard and BUSTH, serve as pastor at Park Street Church and Bay Area Community Church, and finally become secretary of the Global Christian Forum in 2018. Across the stages of his journey, Essamuah has focused on fostering Christian unity and encouraging churches to move beyond their doctrinal differences. Speaking about a meeting of the Global Christian Forum focused on persecution of Christians in Pakistan, Essamuah reflected on why Christian unity is such a priority in his life. "Persecution does not differentiate between Lutheran or Baptist or Orthodox--everyone is treated the same at the point of death," he explained. "He who unites us is more significant than that which divides us."

Read the full article in focus here, or read the entire issue of the magazine here.

Three professional missiological groups--the American Society of Missiology, the Association of Professors of Mission, and the Academy for Evangelism in Theological Education--have crafted a statement in response to racial injustice in the United States, specifically seen in the murder of George Floyd. The statement acknowledges the mixed legacy of Christian mission groups regarding racial equality and expresses several commitments. Among these are commitments to creating multicultural and multiracial partnerships, confessing personal and institutional sin, seeking restitution, and working against racism embedded within organizational policies and structures.

ASM, APM, and AETE Statement on Race and Injustice in the United States of America

In light of recent developments in the United States and around the world, impelled by the murder of George Floyd and countless other African-Americans, we the leadership of the American Society of Missiology, the Association of Professors of Mission and the Academy for Evangelism in Theological Education, representing members of diverse cultures, races and nations, express our commitment to oppose and resist the forces of evil manifested in the longstanding scourges of racism and the legacy of slavery that ravage this nation in personal, communal and systemic ways.
Standing firm in the fundamental conviction that all human beings are created in God’s image (Gen 1:27), we acknowledge that the history of missionary activity and evangelistic endeavors contains the dangerous memories of the church’s mixed record of living out this conviction in truth and integrity.  At times, Christian missionaries and evangelists have manifested great courage and selflessness in confronting injustice, oppression and dehumanization.  At other times, they have been complicit in the perpetuation of racism and other assaults on human dignity as a result of fear, silence, apathy, ignorance or explicit teachings, attitudes and behaviors.
Mindful of these realities, we, as members of professional missiological societies dedicated to the academic study and the practical advancement of God’s mission in the world, commit ourselves:
To advocate for racial equity, in whatever ways that we are able, as we work in multicultural, multiracial and multinational partnerships to bring an end to racism and racial violence in whatever forms they appear;
To take responsibility for identifying and working diligently to eradicate all traces of injustice, exclusion and marginalization that may be present in the policies, practices and structures of our respective mission organizations, churches and academic institutions;
To listen to the voices that have been silenced and learn from the visions and experiences of individuals and communities affected by racism as well as its convergence with other injustices;
To confess participation in the sin of racism, in the measure that one is culpable, personally and/or institutionally, by seeking pardon from God and forgiveness from all who have suffered unjustly as a result, and providing restitution wherever possible;
To examine our own hearts as we pray with the Psalmist, “Create in me a pure heart, O God” (Ps 51:10); and to find our hope in the Gospel of Jesus Christ in which, we believe, lies the power for authentic encounter, justice, reconciliation, renewal, and healing.

On May 29, Christianity Today featured a story discussing the limitations of the term "pentecostal" in describing various Christian groups worldwide.  The article focused on discussion surrounding the decision of the editors of the new edition of the World Christian Encyclopedia, co-edited by STH alumna Dr. Gina Zurlo, to refer to these groups as "Spirit-empowered" Christians. Weighing in on the conversation, Dr. Nimi Wariboko, CGCM faculty associate, noted that the "essence" of pentecostalism is not its "geographical origin," but rather its tie to the Spirit who is always on the move.

Ecclesiastical History Society: The Church in Sickness and in Health

By Morgan CragoMay 27th, 2020in Announcements, Call for Papers

Following the postponement of its 2020 summer conference due to the Covid-19 pandemic, the Ecclesiastical History Society invites articles for a peer-reviewed volume of Studies in Church History on the Church in Sickness and in Health.

From the earliest times, the Church has cared for the sick and the health of society both in a physical and spiritual sense. Anointing and praying for the sick was combined with medical care for the afflicted. The intercession of the Virgin Mary, St. Roch, and St. Sebastian, for example, was sought to protect the faithful from plague, while further saints offered hope against other diseases. Religious foundations such as leper and plague hospitals cared for the diseased but also isolated them to protect the health of society. The institutionalisation of the Church's care for the sick led to the foundation of hospitals and medical schools. Leading London hospitals, such as Bart's and St. Thomas's, developed from medieval monastic foundations and today the Catholic Church is the largest non-governmental provider of healthcare.

In spite of the Church's concern for the sick, from the Early Church to the present there have been tensions between medicine and religion, the balance between the will of God and scientific intervention. For some Churches being a doctor was regarded as being incompatible with being a minister. This uneasy relationship can be seen in the resistance of some faiths to certain medical procedures and research (for example STEM-cells, cloning, genetic manipulation of embryos).

Papers are invited that consider the place of the Church in sickness and in health across confessions from the Early Church to the present day. Possible themes, may include but are not restricted, to the following:

Please submit proposals by 15 October 2020 using the form on our website: https://ecclesiasticalhistorysociety.com/churchinsicknessandinhealth/ Full papers will need to be submitted by end of January 2021. For any queries, please contact Dr. Tim Grass at ehseditorial@gmail.com.

Professor Jeremy Menchik at the Frederick S. Pardee School of Global Studies has just been promoted to Associate Professor, with tenure. He studies comparative politics, focusing on the role of religion in politics and civil society, including Muslim societies in Indonesia, global Christian missionary activity, and Wilsonianism. He has authored a book, Islam and Democracy in Indonesia: Tolerance without Liberalism (2016), which won the International Studies Association’s award for best book on religion and international relations, alongside three book chapters and numerous articles in top-tier journals, including International Studies Review. He is also a past winner of the Pardee School’s Gitner Family Prize for Faculty Excellence. Congratulations to Dr. Menchik, a CGCM faculty associate, for his promotion and accomplishments! 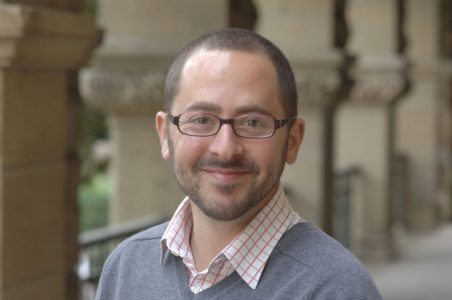 Congratulations to Rev. Dr. Joas Adiprasetya (STH '09), President of Jakarta Theological Seminary, for being recognized by The Ecumenical Review for producing the most downloaded paper of 2018-2019! Published in April 2019, Dr. Adiprasetya's article is entitled "A Compassionate Space-Making: Toward a Trinitarian Theology of Friendship." The article is co-authored with Nindyo Sasongko. 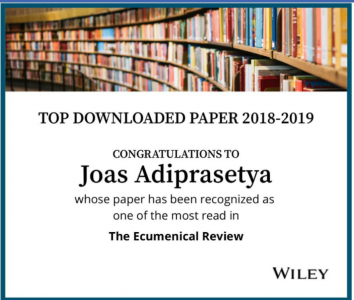 Congratulations to Anicka Fast ('20) and Dima Hurlbut ('20), who are among those students who earned the Graduate Certificate in African Studies! 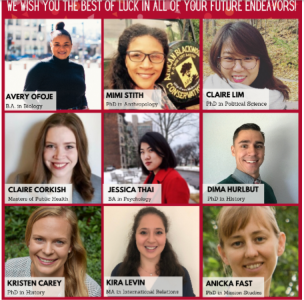 Call for Papers Reminder: Special Issue of the Journal RELIGIONS

This Call for Papers is on behalf of the journal RELIGIONS, which is preparing a special issue entitled “Broadening Themes and Methodologies in the Research and Writing of History and Christian Mission Theologies.” We are looking for proposals that will address the following description:
This special issue seeks to explore the intersection between history, mission, and theology in the worldwide Christian movement. Essays are invited that identify and investigate new themes or methodologies in the research and writing of the history of Christianity and Christian mission theology. While recent scholarship has begun to diffuse the separation between the history of Christianity and the history of Christian mission, this special issue directly challenges the division between the history of Christianity, the history of Christian mission, and the history of theology. Rather than separate, the issue's focus argues that they are in constant conversation. Thus, the issue's central question might be framed as:  How have Christian mission activity and theological constructs shaped, reordered, deconstructed, etc., each other in particular periods and contexts?
For more information, you can follow the link, https://www.mdpi.com/journal/religions/special_issues/Mission#editors
If you are interested in submitting a paper, please send (1) a tentative title and (2) an abstract of no more than 500 words by June 15, 2020. Please send it to the following email address, carlos_cardoza@baylor.edu
The second way is to submit an essay following the directions in the link provided above. Take note that given the current circumstances, RELIGION has extended the submission of manuscripts for 30 January 2021.

Deadline for submissions is the 30 June 2020. For further details, please see the official Call for Papers or email the Conference Organiser.