Chasing the Wild Goose: The Story of the Iona Community 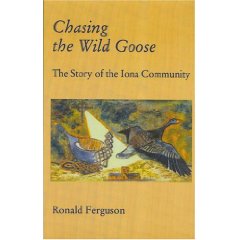 Title:   Chasing the Wild Goose: The Story of the Iona Community

Ronald Ferguson, leader of the Iona Community from 1982 to 1989, presents the Iona Community’s story through the image of the wild goose (the Celtic symbol for the Holy Spirit).  The Iona Community has a long history, beginning with Columba who left Ireland for Scotland and was content to come ashore at Iona where “Ireland could not be seen.” Columba established the first community on the island and its Celtic spirituality was only invigorated over the next two centuries.  These early Celtic monks were eventually dispersed, due primarily to a Viking raid which killed many and left buildings in shambles.  These early Celts moved inland and it wasn’t until 1156 that “The Wild Goose was sighted again.”  This time it was Benedictine monks, sent by Reginald, Lord of the Isles, to establish a Benedictine community on the “Columban foundation.”  The Benedictine monks made substantial repairs and constructed additional buildings in order to erect a full functioning Abbey.  This community, however, was short lived as well.  Ferguson notes that, “at the Reformation the Iona Monks were dispersed” (42).  The Abbey eventually was turned over to the official Church of Scotland which only made occasional use of it.  It became a place to visit, drawing both “the famous and the curious” even though it was basically a place of desolation (45).  In 1828, however, it became an official parish of the Church of Scotland.  It received a resident pastor, holding services again, and soon attracting tourists and pilgrims.  In 1899, both the Duke and the Church of Scotland decided that “the Abbey should be restored and that all branches of the Christian Church should be able to worship there” (45).  What was needed, according to Ferguson, “was a complete rebuilding.” (45)

This marks the beginning of the current Iona Community.  George Macleod, who would become the longtime leader of the Iona Community, brought men from Glasgow “for a new experiment in Christian Community” (49).  Macleod was an energetic and enthusiastic young minister “appalled by the social deprivation in Govan (his previous parish) and the Church’s lack of response” (50).  Macleod’s new experiment proposed two things.  First, that unemployed craftsman would be invited to restore the ancient Abbey buildings, and second, that future ministers in the Church of Scotland could come and be prepared, working side by side with craftsmen while living in community.

Ferguson’s story of Iona becomes more detailed as he deals with the community as it exists today.  Macleod’s leadership, along with the (at that time) endless task of restoring the Abbey, defined the purpose of the Iona Community.  Macleod helped Iona establish avenues of ministry on the mainland (primarily urban, like the Community House) and forms of support and revenue through The Friends of Iona and various speaking engagements.  Macleod’s leadership, Ferguson writes, was “autocratic and impatient,” nevertheless; he was an attractive character who rightly understood Iona to be providing important renewal for the Church (63).  Macleod was eventually elected to leadership within the Church of Scotland, and in 1957, changes in leadership as well as community life began to take place at Iona.  What Ferguson presents is the story of a discerning community.  Macleod and the restoration projects seemed to give Iona an obvious purpose for its first twenty years.  The leadership that followed Macleod (Ralph Morton, Ian Reid, Graeme Brown) initiated more democratic styles of leadership where decisions were made by the community through discussion and discernment.  Iona continued to grow and attract new members.  Both its island and mainland programs sought creative ways to engage the church and poverty.  With new members came a more ecumenical focus.   This affected the worship, spirituality, and ministry of Iona.  Iona has, since its origins, maintained a concern for justice and peace, but now it began to see its role in the broader world.  New members brought insights about injustice and oppression happening worldwide for the community to respond to.  In addition to third world concerns, the “male bastion” was breached in 1969 when Dr. Nancy Brash became the first woman to join Iona; she opened the doors for many women who would become leading members in the community (112).

George Macleod continued to live and be involved at Iona even though he had no official capacity.  His presence was positive for Iona, though it took him time “to learn to let go.”  He died in 1991, and like when he stepped down from leadership in 1957, the Iona community still was discerning what their purpose is for both the church and the world.  This is Ferguson’s theme, that Iona is a community led by the Wild Goose.  It is a continual experiment that must be both radical and in service to the church.  While Iona appears to have a firm foundation, the truth is, Ferguson writes, that “the mortality rate among religious communities is notoriously high…when the need is met, or the agenda shifts, or the leadership changes, or the community fails to adapt, disintegration sets in” (160).  Ferguson goes on to write that, “simply to exist for half a century is an achievement” (160).  This is the perspective of Iona, to serve a purpose so long as the Spirit leads.

Even though this text was primarily a historical read of the Iona Community, it is both inspiring and theologically engaging.  Stories such as this need to continue to be told; they evoke the passion and creativity that allow the church to more fully embody its call in the world.  For ministers with an entrepreneurial spirit, this book may even be dangerous, but in a healthy way, calling forth innovation and creativity to be part of the renewal and revitalization necessary in the church.  Theological themes are present within the text.  In addition to the obvious guiding language of the Spirit, theology of place, community embodiment of Christian ethics, Christian pacifism, and ecumenical openness all receive significant attention.  Particularly helpful are the implications for theological economics.  Iona provides a unique example of a community initiated by a desire to alleviate unemployment and stratification.  By acknowledging the “divine vocation” of craftsman and the need for ministerial trainees to work side by side with them, Iona followed a Benedictine model of work as prayer and participation in the economy of God.

14th Annual Lecture: What Does it Mean to be a Practical Theologian?

Trauma Response Program for Congregations: A Conversation with Shelly Rambo