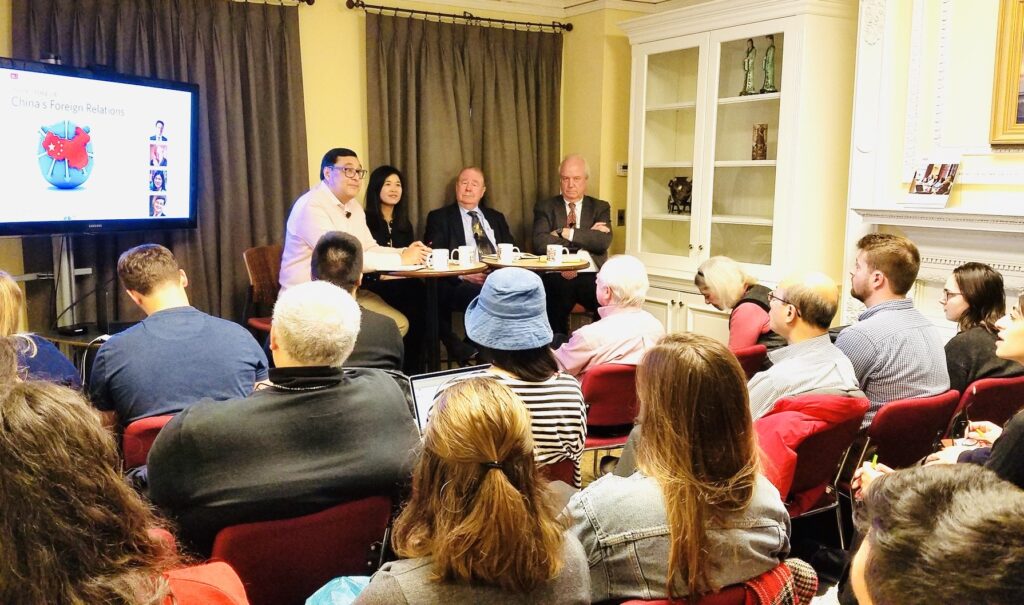 A standing-room only audience at the Frederick S. Pardee Center for the Study of the Longer-Range Future, now an affiliate center of the Pardee School of Global Studies, attended the first Pardee House Seminar of the year, focusing on “The Future of China’s Foreign Relations.” Held on February 11, 2020, the event features Professors Jorge Heine, Joseph Fewsmith and Min Ye and was moderated by Dean Adil Najam.

A spirit dialogue between the panelists, and later with the audience, focused on what the rise of China means for the world in terms of global politics, especially including US-China Relations. Prof. Heine, who is a former Ambassador of Chile to China, argued that the rise of China is not only spectacular but marks the emergence of a new multipolar order and can be a stabilizing and positive force for the world. Prof. Fewsmith, a leading authority on Chinese internal politics and author, amongst others, of the book The Logic and Limits of Political Reform in China, was less sanguine in his views and highlight many more ominous trends, particularly within China itself, arguing that the biggest threat to China’s rise may be China itself. Prof. Min Ye, most recently author of the new boon The Belt Road and Beyond, argued that the path to be future may lie somewhere between the two views and that the rise of China’s foreign policy influence, especially with its Belt and Road Initiative (BRI) is neither as malign nor as benign as it is often made to be.

In introducing the event, Dean Najam, reminded the audience that the BU Pardee Center had long focussed on China’s rise, including with its major conference on “Where is China Headed?” (2008; click for conference report and videos), which had led to the book “China Today, China Tomorrow” (2010), edited by Prof. Joseph Fewsmith.

The Pardee Center, now celebrating its 20th Anniversary, will be holding a series of seminars in the “Future of…” theme that will look at the possible future trajectories of a host of major contemporary issues.