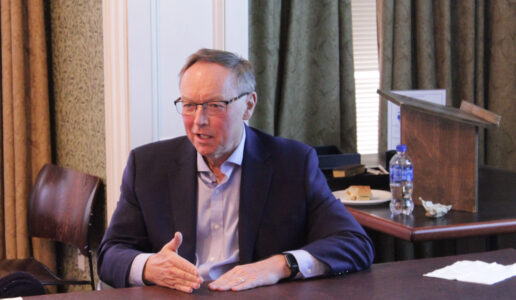 Igor Lukes, Professor of International Relations and History at the Frederick S. Pardee School of Global Studies at Boston University, published a recent article examining what caused of the end of the Habsburg Empire.

Lukes published an article entitled “Who (Today, 105 Years Ago) Killed the Habsburg Empire?” on June 28, 2019 in Pritomnost.

Like Metternich to Vienna, Palacky (1798-1876) came to Prague when he was already in his twenties, but his scholarship and his personal integrity were so impeccable that the Estates appointed him the Historian of the Bohemian Kingdom. His academic reputation grew further and in 1848 he was invited to take part in the preparations for the Frankfurt Assembly.

Palacky refused to participate in the proceedings with a letter that ranks among the most far-seeing analytical documents of the 19thc. He warned that the initiatives of the Frankfurt Assembly would ultimately undermine and destroy the Habsburg empire and he concluded that “Austria dissolved into a number of republics and smaller republics” would become “a welcome foundation for the Russian universal monarchy.”

It is unclear how closely Palacky had followed British or French periodicals. If so, he would have agreed with articles that started appearing in the mid-1830s, noting that since Peter the Great, Russia had extended its territory some 700 miles toward Berlin, Dresden, Munich, and Vienna, about 500 miles toward Constantinople, 630 miles toward Stockholm, and 1,000 miles toward Teheran. Marx quoted this observation in 1849.

Palacky’s letter to Frankfurt explains that the destruction of the Habsburg empire and its replacement with successor states was bound to have the unintended consequence of bringing Russia into the heart of Europe. With this mind, Palacky thanked his colleagues for the invitation to be a co-organizer of the Frankfurt Assembly and explained why he was unable to accept it. Russia, he warned, “already grown to colossal size, increases in strength and pushes outward from the center from one decade to the next. Every further step that it may be able to take threatens to accelerate the creation and imposition of a new universal monarchy—an unimaginable and inexpressible evil, a calamity without limit or end.” Palacky was careful to stress that he applauded every advance that Russia makes “on the path of civilization.” What he opposed was not Russia, but the global reach of its rule.