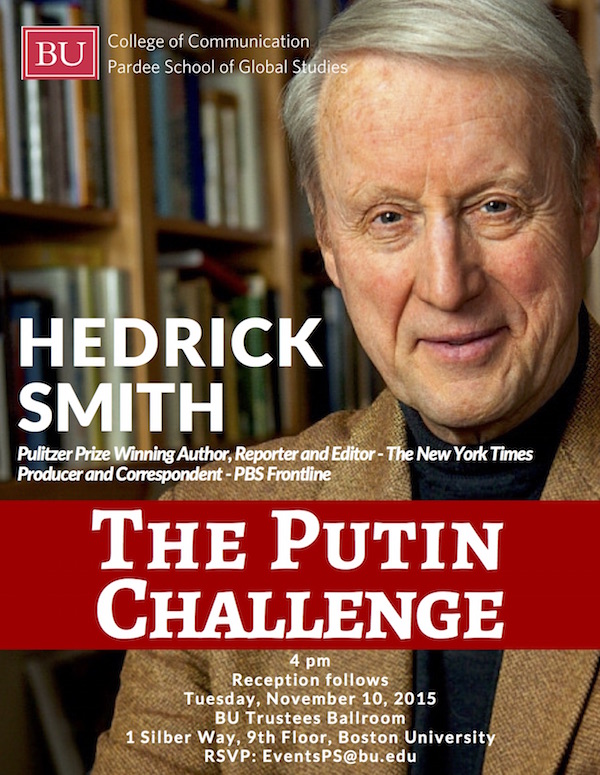 The Frederick S. Pardee School of Global Studies at Boston University is proud to present Hedrick Smith, producer and journalist for PBS Frontline, in a wide-ranging discussion on the state of modern Russia.

“The Putin Challenge” will take place on Tuesday, Nov. 10 at 4 p.m. at the BU Trustees Ballroom at 1 Silber Way. It is co-sponsored by the Pardee School and the BU College of Communications (COM).

Smith was a reporter for the New York Times from 1962 to 1988. During his career, he covered stories such as the Martin Luther King Jr. and civil rights struggle, the Vietnam war, and the Cold War from both Moscow and Washington. Smith has worked for PBS since 1989 where he created 26 prime-time specials.

In 1971 as the Times chief diplomatic correspondent, Smith was a member of the team which produced the Pentagon Papers series; and in 1974, he was awarded a Pulitzer Prize for International Reporting for his coverage of the Soviet Union and its allies in Eastern Europe.

He was the author of The Russians, based on his years as New York Times’ Moscow Bureau Chief from 1971–74.

On two different occasions, Smith either won or shared the Columbia-Dupont Gold Baton, or grand prize, for best public affairs program on U.S. television for Inside Gorbachev’s USSR in 1990, and for Inside the Terror Network in 2002, an investigation of the Al Qaeda pilots who carried out the 9/11 attack and how the U.S. failed to stop them. In addition to the George Polk, George Peabody and Sidney Hillman awards for reporting excellence, his programs have won two national public service awards.

“The Putin Challenge” will comprise of a keynote address, question and answer session and a reception for attendees. Reservations are required at EventsPS@bu.edu.