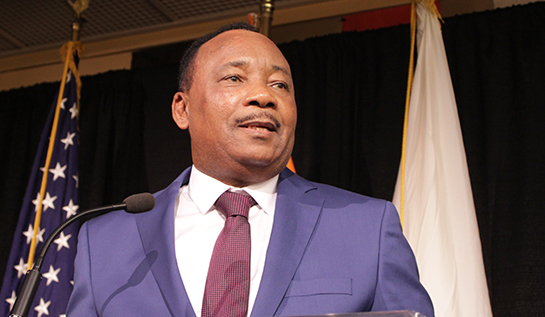 Issoufou Mahamadou, President of the Republic of Niger, visited the African Studies Library at Boston University on April 3 to officially dedicate a new archive of Nigerien research materials.

“More than just a center of excellence, Boston University is an emblematic institution that has contributed to world knowledge through its accomplishments,” Mahamadou said. “This archive represents a cultural partnership that will lead to a better understanding of Niger for scholars from all over the world that study at Boston University.”

During his remarks, the President of Niger also spoke passionately about the positive impact that Peace Corps students have had in Niger. He also spoke about the struggles his country and others have with the terrorist group Boko Haram. He stressed that his country was committed to fighting this menace and also that it is important to expose Boko Haram as the enemy of Islam rather than as a representation of Islam.

President Issoufou Mahamadou stressed that Islam is a religion of tolerance and peace and that the real enemy of groups like ISIS and Boko Haram are Muslims and the very idea of Islam. He felt that there is no such thing as ‘moderate Muslims’ because all Muslims are supposed to be moderate; it is the extremists who are trying to wrest away the meaning of Islam by defacing it with acts of inhumanity and violence.

The archive was dedicated in a ceremony that saw diplomatic officials from many African nations, as well as Peace Corps volunteers with decades of ties to Niger, come together. It was those ties that were responsible for gathering so much of the reference material that comprises the archive.

“The Archive holds 300 printed materials and more than 1,000 images, and that is just the beginning,” said Beth Restrick, head of the African Studies Library. “We have issued a call to the decades of study abroad alumni and Peace Corps volunteers that traveled to Niger from Boston University. The materials collected so far came from nine donors. In the long term, we hope to make this archive a national resource for scholars studying Niger. We’re thinking big here.”

The Republic of Niger was founded in 1960, two years before the establishment of the Peace Corps. For nearly five decades, there was a fruitful relationship between Niger and the United States, much of it through Boston University, one of the few American universities with a program of education in Hausa, one of Niger’s native languages. Though increasing hostility brought study abroad and Peace Corps programs in Niger to a halt in 2011, many of the dignitaries in attendance hoped the dedication of the archive marked a turning point.

“This archive will be a key resource for current and future researchers,” said Dr. Jennifer Yanco, Director of the West African Research Association. “It’s an opportunity to deepen relationships in the entire region.”

The event was coordinated with the assistance of the West African Research Association, the Friends of Niger, the Nigerien Embassy, and the African Studies Center, an affiliated center of the Frederick S. Pardee School of Global Studies at Boston University.

“We encourage anyone who has material for this archive to donate it,” said Tim Longman, Director of the African Studies Center. “This is a fantastic resource.”

For more information on accessing the Nigerien Archive, visit the website of the African Studies Library.