America’s Mayors See Regulatory Powers As Their Top Climate Action Tools, But Are Reluctant to Limit Resident Choices, According to Survey of US Mayors 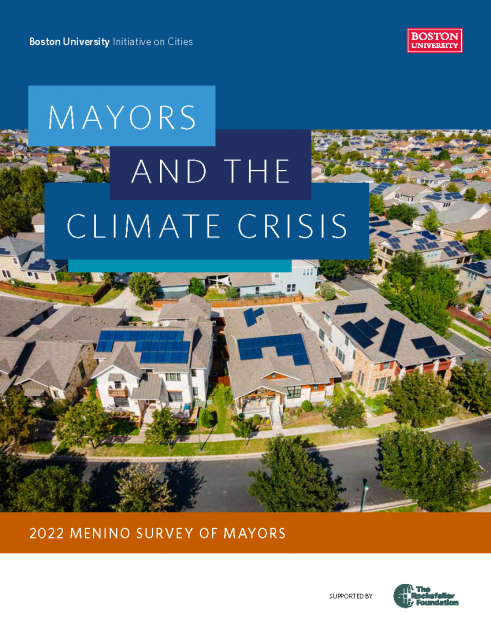 The Inflation Reduction Act marks a landmark investment in climate, featuring hundreds of billions of dollars in commitments toward transforming American energy use and emissions reductions. Local leaders are key allies in putting these dollars to work, as frontline communities are centered in its implementation. America’s mayors feel a sense of urgency to act, as their communities face real and immediate climate impacts, including drought, extreme heat, flooding, and air pollution. Just 3% of mayors say they are not concerned about any local effects of climate change.

These are some of the findings from the latest Menino Survey of Mayors, the only nationally representative survey of America’s mayors conducted annually by Boston University’s Initiative on Cities. A full report on mayors’ attitudes regarding their cities’ climate issues and priorities can be found here.

Mayors across the country believe in the need to take significant local climate action, even if it is costly: 73% agree that cities should be willing to expend resources and incur costs to address climate change, and 8-in-10 of those who agree say they are motivated by a “desire to do our part” irrespective of where climate impacts happen. However, there are notable partisan differences with 87% of Democratic mayors agreeing with the need to make significant financial investments in climate action compared to 43% of Republicans. While sizable, this partisan gap has closed since 2019 due to a growing share of Republicans agreeing that the investment is necessary.

“Our city continues to prepare for the impacts of climate change, from rising sea levels to increasing frequency and strength of hurricanes,” said Tampa Mayor Jane Castor. “While this crisis is a global one—calling for collaboration across all levels of government, the private sector, and citizens—mayors have been at the forefront of climate innovation, creating policies and tools that mitigate impacts, build resiliency, and address environmental justice concerns.”

Mayors cite their city’s influence over building codes (55%) and zoning (38%) as their top two most powerful climate tools. In contrast, very few mayors (8%) cite their authority to ban or limit behaviors as a top tool, suggesting they are not equally bullish about all regulatory powers. Mayors are reluctant to impose restrictions on gas stoves, gas lawn tools, and gas and oil heat, or to try to dissuade residents from driving.

Rather, mayors seem more comfortable with creating choices for consumers and spending government resources on climate-friendly versions of things they can and do buy. Mayors from both parties strongly support purchasing or encouraging new technologies like electric vehicles. In fact, three-quarters support replacing their city’s municipal vehicles early – “before their natural lifecycle ends” – with more fuel-efficient versions. This suggests a major opportunity for federal agencies and partners to help cities improve fleet management practices and align electric vehicle charging infrastructure investments with future municipal fleet needs. In this vein of actions involving the city’s own resources, a majority of mayors were also supportive of using local government funding for energy efficiency upgrades in private homes.

“We’re seeing a lot of enthusiasm from a lot of mayors about local climate actions,” said David Glick, Menino Survey Co-Author and Associate Professor of Political Science at Boston University. “At the same time, we’re also seeing the realities that many mayors are constrained in various ways as only a subset of these enthusiastic mayors are embracing the full set of potentially controversial tools.”

Energy for cities and their residents is a key domain in which climate, economic, and social concerns intersect. Mayors are simultaneously concerned about both costs of current energy supplies and energy supplies’ impact on the environment: 57% cite rising costs as one of their top two energy concerns and 47% cite environmental impacts. Democrats and Republicans agree about cost concerns, but Democrats are much more concerned with environmental impacts, while Republicans worry more about keeping up with future demand.

“Mayors across the country are concerned about the threat of drought, extreme heat, and flooding on their cities. These climate related catastrophes have a disproportionate impact on low-income and marginalized communities,” said Gregory Johnson, Managing Director of the Equity & Economic Opportunity initiative at The Rockefeller Foundation. “The 2022 Menino Survey of Mayors on the climate crisis should act as a steppingstone to building a plan to address the crisis with the needs of marginalized communities in mind.”

Local decisions about climate change can require direct engagement with residents. However, mayors are almost perfectly divided about whether public meetings are informative or misleading. About half see public meetings as a “valuable source for learning about the views of the community,” while the other half say they mainly “provide information from a non-representative group and can be a misleading source of public views.” Mayors are also concerned about a wide range of types of disinformation that they hear from constituents. The most common response was related to conspiracy theories in general, followed by disinformation about Covid-19 and vaccines, policing (both under- and overfunding), and distrust of government in general.

The Menino Survey of Mayors, named after the late Mayor of Boston Thomas Menino and supported by The Rockefeller Foundation, is an annual project to understand the most pressing needs and policy priorities of America’s mayors from large and mid-size (over 75,000 residents) cities. In total, 118 mayors from 38 states were interviewed throughout the summer of 2022, providing a representative sample of mayors and cities nationally.

Additional findings from the 2022 Menino Survey – related to poverty and health and safety – will be released as a separate report in March.

January 18, 2023: American City & County: Report: Regardless of party, mayors are united in concern about climate change — and what’s causing it

Policy Brief: Cities, Zoning, and the Fragmented Response to Homelessness