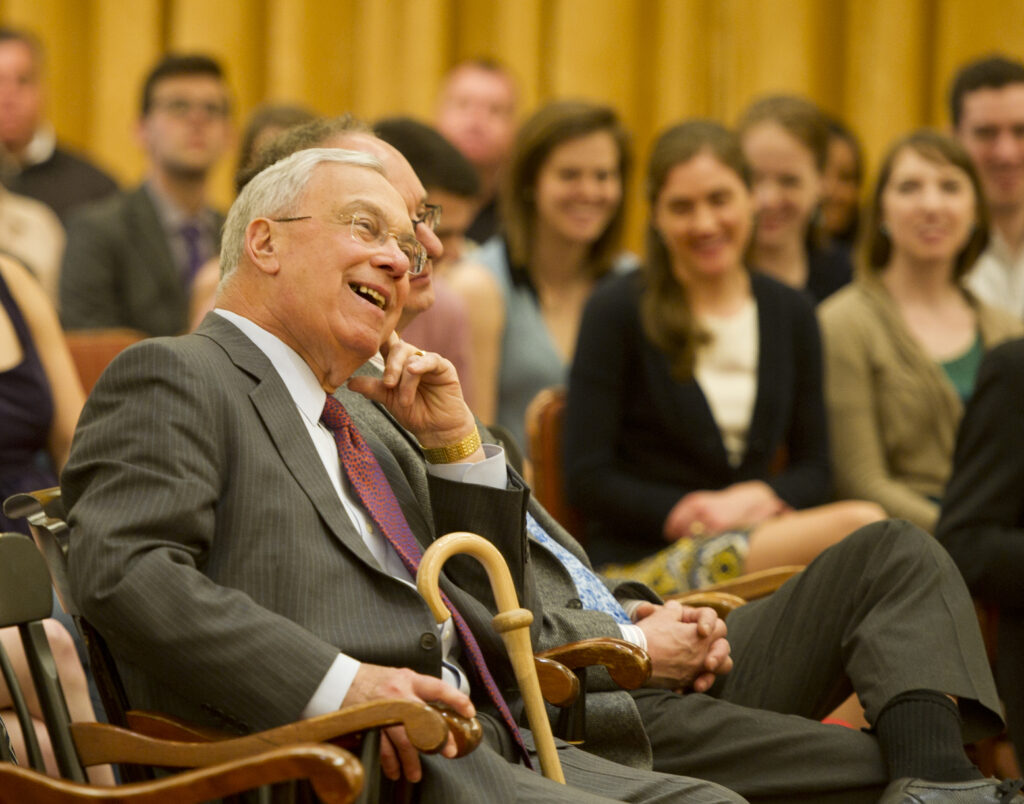 Elected five times as Mayor of Boston and five times as a City Councilor, Tom Menino made Boston his life’s work. His hard work and his values – of public service, tolerance and fairness – helped transform Boston into the shining city we know today. And he did it one handshake, one block party and one student at a time.

As a Mayor who was lauded for having personally met over half of Boston’s residents, Tom Menino set a high bar for elected officials. His schedule was legendary, but even more legendary was his belief that his best ideas came from being out in the community with the people he was elected to serve. His polls were conducted in real time, as he visited coffee shops and youth centers to take the pulse of the city. Every Christmas Eve was spent in the Bowdoin-Geneva section of Dorchester, where he met with business owners, provided toys to children and walked the streets so that his visibility might bring reassurance and calm.

Years before income inequality made national headlines, Tom knew that a city needs to work for all of the people, not just some of the people.  In 2000, he launched Leading the Way, a multi-year initiative responsible for creating more than 20,000 new housing units in Boston, including more than 5,500 affordable units, over a decade. He was committed to equity in public housing, doggedly pursuing Hope VI funds from the federal government to transform public housing in Roxbury and East Boston.  He often said: “just because someone lives in public housing doesn’t mean they should live in substandard housing.”

To address health disparities among Boston’s racial and ethnic groups, Menino convened a Health Care Disparities task force.  Along with more than $1million in financial support, he used the power of his office to gather the city’s leadership in health care and public health in order to focus attention on and find solutions to the disparities in health outcomes. The Mayor’s efforts put Boston’s hospitals at the forefront of best practices in the provision of health care to people of color, and in 2006 he was recognized by the U.S. Department of Health and Human Services for his contributions to improving minority health.

Mayor Menino celebrated the different cultures and new traditions that enliven Boston.  Time and again, he would say, “The diversity of our city is the strength of our city.”  During his time in office, Boston became a majority-minority city where over half of residents were from communities of color. His formation of the Office of New Bostonians provided immigrants with a special connection to City Hall and helped him stay abreast of the changing needs of many of Boston’s newest residents, while the creation of the Newcomers Academy within Boston Public Schools assured young people an opportunity to master the English language skills they needed to thrive.

A champion for the LGBT community, Menino became an early supporter for gay marriage. As he so artfully put it during his address to the 2012 Democratic National Convention: “You know what we call same sex couples in Boston? Our friends.” Never one to miss an opportunity to engage with constituents, his early refusal to march in the St Patrick’s Day parade was a surprise to many, but he believed that a parade which excluded gay rights organizations was no place for him. His administration was celebrated for having among the highest proportion of lesbian and gays in leadership roles and his open letter rejecting a Chick-fil-A franchise in downtown Boston was heralded as a bold declaration that intolerance has no home here.

As a champion for Boston schools, Menino became the advocate in chief for its students. He transformed Boston Public Schools into a celebrated district – earning recognition from the Broad Foundation as the most improved urban school district in the country in 2006. He was a regular presence at every school, hosted an annual awards ceremony for star students and met each year with the graduating valedictorians. To some the gestures may have seemed minor, but to the children of Boston they were reminders that Mayor Menino, the Mayor of their generation, was their ally and friend.

Early in his tenure, he was called – somewhat disparagingly – the urban mechanic. It was a mantle he wore proudly. Menino worked hard to get trees planted, potholes filled, garbage cleared and street lights fixed. And as the world changed, he changed with it, launching the Mayor’s Hotline and an Office of New Urban Mechanics, deploying new technologies to improve access to city services and to engage citizens in the activities of government. The Mayor’s drive for technological innovation positioned Boston at the forefront of collaborative government.

As a national leader, Menino served as President of the US Conference of Mayors, making affordable housing his top priority. He also founded the USCM Task Forces on Education and on Food Policy and worked with the National League of Cities to create the Institute on Youth, Education and Families, which works with cities to address issues affecting low income families. He co-founded Mayors Against Illegal Guns with Mayor Michael Bloomberg, which has grown to encompass more than 1,000 mayors across the country in the call for common sense gun reforms.

In spite of his national profile, his City came first. Unlike many politicians, Mayor Menino did not enter City Hall with an eye to higher office. He did exactly the job he loved for the city he loved. When he left office – during a time when Americans view elected officials with deep suspicion and government is better known for intransigence and stalemate than for action – he enjoyed an 82% approval rating. He was proud to be a public servant and we were proud to have him as our Mayor.

Mayor Menino passed away in October of 2014 after a courageous battle with cancer. He is survived by his wife, Angela, two children, and six grandchildren.

In October of 2015, Boston University President Dr. Robert Brown joined the Menino family to announce the creation of the Thomas M. Menino Archive to be housed at the Howard Gotlieb Archival Research Center. An online portal containing photos, video and audio clips is accessible online here. A physical exhibit will be announced at a later date.