Our team has interviewed mayors from across the country to examine the leadership and management challenges facing modern-day mayors today and over time, through a first of its kind mayoral leadership research initiative.

The 2020 Menino Survey of Mayors represents the seventh nationally representative survey of American mayors and is based on interviews with 130 sitting mayors from 38 states. The 2020 Survey explores mayoral views on COVID-19 recovery, policing and protests, parks and greenspace, and the 2020 Census. The first set of findings, released in September 2020, details mayors’ fears of census undercounts and what actions their cities are taking to increase participation. Additional findings will be released as separate reports in the coming months. The 2020 Survey continues with the support of Citi and The Rockefeller Foundation. 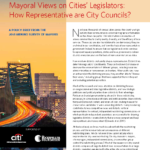 In April 2020, the Initiative published a policy brief related to the 2018 Menino Survey findings: Mayoral Views on Cities’ Legislators: How Representative are City Councils? This brief provides additional context and deeper understanding of mayoral perspectives on the quality of their city council’s representation for different racial, ethnic,
economic, and social groupings, and on legislative redistricting in cities.

The 2019 Menino Survey of Mayors represents the sixth nationally representative survey of American mayors and is based on interviews with 119 sitting mayors from 38 states. The 2019 Survey explores mayoral views on issues ranging from infrastructure and transportation priorities — including mobility and public safety — to the changing nature of work. The 2019 Survey also provides the first in-depth examination of mayors’ reactions to and expectations for the Opportunity Zones program, a significant new federal initiative to stimulate urban development. The 2019 Survey continues with the support of Citi Community Development and The Rockefeller Foundation.

In December 2019, the Initiative published two policy briefs related to the 2018 Menino Survey findings: Mayoral Views on Housing Production: Do Planning Goals Match Reality? & Mayoral Views on Economic Incentives: Valuable Tools or a Bad Use of Resources?. The briefs provide additional context and deeper understanding of mayoral perspectives on housing production goals and on the use of economic incentives to attract new businesses.

In June 2019, the Initiative published a corollary report to the 2018 Menino Survey, Mayors and the Health of Cities. The report sheds sheds light on how US mayors perceive and prioritize the health of their cities in the context of existing urban health data. The report also highlights promising city-led initiatives targeting four priority health areas: the obesity epidemic, the opioid crisis, traffic fatalities, and gun violence.

The 2018 Menino Survey of Mayors represents the fifth nationally representative survey of American mayors and is based on interviews with 110 sitting mayors from 37 states. The 2018 Survey reveals mayoral views on economic development—including corporate recruitment, financial incentives, the sharing economy, and social mobility—as well as public health, housing, and intergovernmental relations.

In September of 2018, the Initiative published Mayoral Views on Racism and Discrimination, co-written with the National League of Cities. This report, which draws on data from the 2017 Menino Survey, explores how mayors of medium-sized and large cities understand race, discrimination and equity in their communities and on a national level. The report also highlights several successful initiatives that cities, including Anaheim, Boston, Louisville and New Orleans, have undertaken in combating discrimination.

Supported by The Rockefeller Foundation.

In April of 2018, we published a corollary report to the 2017 Menino Survey, Cities Joining Ranks—Policy Networks on the Rise. The report offers the first systematic review of US city-to-city policy network activities, their media visibility, perceived value in the eyes of mayors, and membership composition. The report also provides novel insights into city peer groups based on an evaluation of network joining behavior.

The 2017 Menino Survey of Mayors represents the fourth nationally representative survey of American mayors and is based on our widest sample to date—115 sitting mayors from 39 states. The 2017 Survey delves into the ways in which mayors are tackling critical urban issues of both local and global import—from housing young families and aging residents to mitigating and adapting to the effects of climate change—while confronting federal and state funding gaps. The research also offers insight into how mayors are rallying individually and as a collective to affect positive change.

The 2016 Menino Survey of Mayors encompassed insights and perspectives shared by a representative sample of 102 mayors from 41 states. While prior years of the Survey have delved more deeply into infrastructure needs and fiscal priorities, the 2016 Survey focused on “people priorities,” including immigration, inclusion, and poverty. Mayors also discussed the impact of the 2016 presidential election on their cities and their hopes for the Trump administration.

The 2015 Menino Survey of Mayors was built on interviews with a representative sample of 89 mayors from 31 states. The objective was to take mayors’ pulses on key contemporary challenges and policy issues—including infrastructure, public safety, and municipal finance—and identify where mayors turn for help in tackling them. A significant portion of the 2015 Menino Survey is devoted to mayoral leadership, including areas of mayoral control and constituent approval, as well as constraints they confront under increasingly politicized and polarized state legislatures.

In October of 2014, the Initiative on Cities released a ground-breaking survey of American Mayors, which has since been dedicated as the annual Menino Survey of Mayors. Based on interviews with over 70 mayors, the 2014 Survey offered the first-ever nationally representative review of mayoral priorities and yields fresh insight into the issues mayors care about. The Survey highlights the importance mayors place on the physical, fiscal and social infrastructure of their cities, and—contrary to prior research—suggests that party affiliation has a significant influence on mayoral priority-setting.