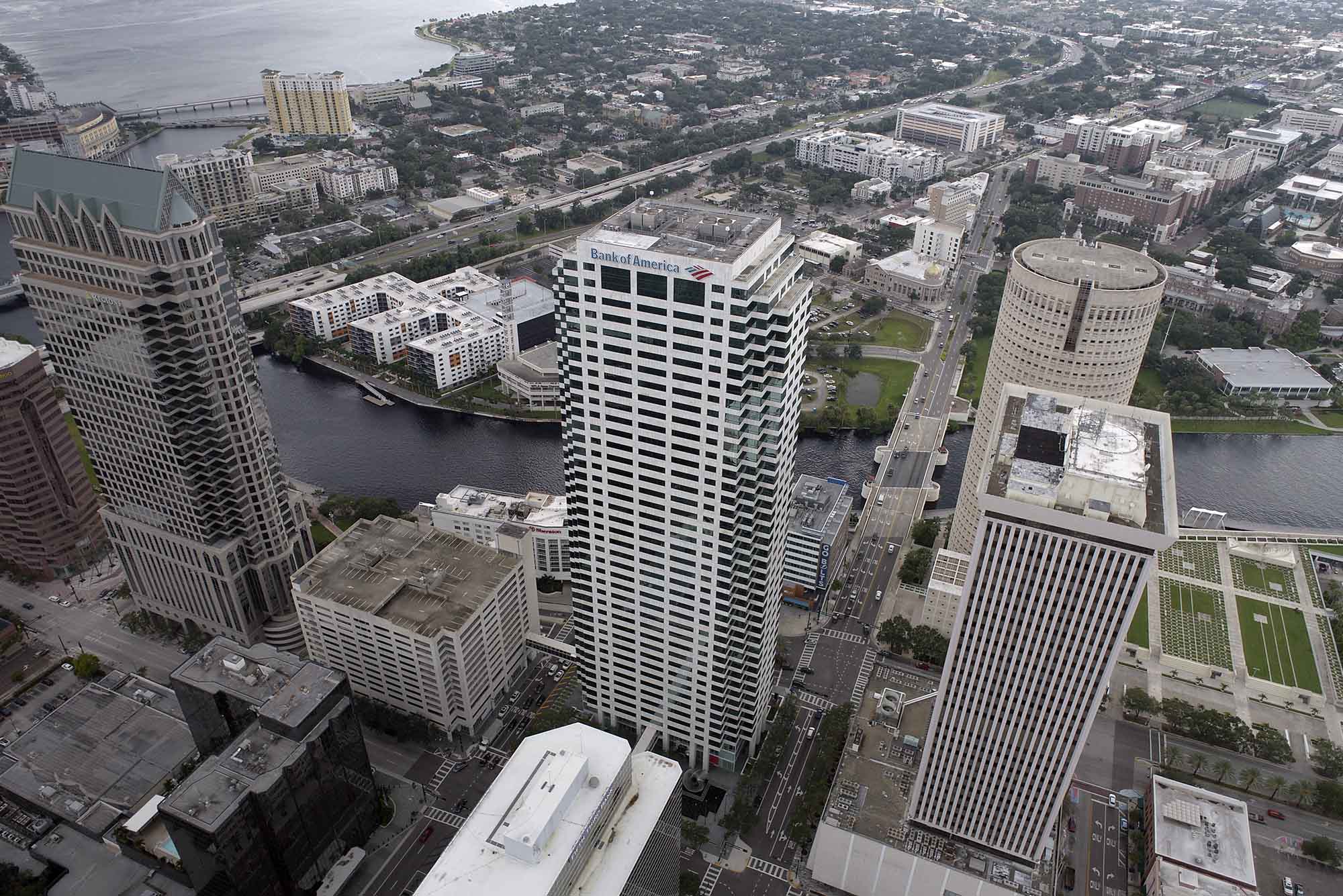 A growing number of cities like Tampa, Fla., are grappling with the effects of climate change. In the photo above, dated September 26, 2022, Tampa was bracing for Hurricane Ian, which was projected to hit the area as a major hurricane. A slight turn in the storm’s trajectory spared the city. Photo by DroneBase via AP Newsroom

Nearly all US mayors are worried about the impacts of climate change on their cities, with the effects of drought, extreme heat, flooding, and air pollution topping their list of concerns. And more than half of them believe that “real progress on climate issues” will mean their residents will have to make “real sacrifices” in their lifestyles. Additionally, while mayors are enthusiastic about investing in new green technologies like electric vehicles and the infrastructure to support them, they are less likely to support restrictions on the use of fossil fuels in new private construction.

These are among the top findings in a report released January 17 by Boston University’s Initiative on Cities (IoC), titled “Mayors and the Climate Crisis,” which asked elected city leaders about their views on climate change and what, if anything, their communities should do to address the issue.

The report, coauthored by Katherine Levine Einstein, David M. Glick, and Maxwell Palmer, all College of Arts & Sciences associate professors of political science, is the first in a two-part series of survey results from the 2022 Menino Survey of Mayors. For the survey, IoC staff interviewed mayors of 118 cities across the United States with populations of more than 75,000 residents. The IoC received support for the research from the Rockefeller Foundation.

The report’s authors note their interviews occurred during the summer, as Congress debated the Inflation Reduction Act, a law signed by President Biden in August 2022 that advocates for action on climate change and was praised for its commitments to promote clean energy and electric vehicles. Such federal investments “represent new opportunities for local governments and local elected officials who have already been addressing climate change or who wish to do so,” the report authors noted.

In the survey, 97 percent of mayors cited at least one local climate change impact they were “very worried about,” with issues such as drought, extreme heat, flooding, and air pollution cited by at least 56 percent of respondents. Concerns varied by region: In the West, 80 percent cited drought as a top concern followed closely by fires, while more mayors in the Midwest (76 percent) and South (68 percent) noted flooding as their most pressing climate change issue. In the Northeast, 79 percent said extreme heat was most worrisome. Overall, only 3 percent of respondents said they were not concerned about any local impacts from climate change.

“Our city continues to prepare for the impacts of climate change, from rising sea levels to increasing frequency and strength of hurricanes,” Jane Castor, the mayor of Tampa, Fla., said in a statement accompanying the release of the survey results. “While this crisis is a global one—calling for collaboration across all levels of government, the private sector, and citizens—mayors have been at the forefront of climate innovation, creating policies and tools that mitigate impacts, build resiliency, and address environmental justice concerns.”

While a majority of mayors believe their communities should act to counter climate change, they think residents will need to bear some of the associated costs: 55 percent said that making “real progress” on climate issues will mean residents have to make “real sacrifices.”

Figure 11: Courtesy of the Initiative on Cities

In the survey, researchers delved into what kinds of actions mayors have considered to slow climate change and blunt its effects on their communities. This context matters to both the potential choices majors have before them and the policies they choose to pursue, given their political calculations and other constraints, says Glick.

For example, mayors are bullish on investing in electric vehicles and supporting infrastructure. Among those surveyed, 74 percent said they “strongly support” replacing their city’s municipal vehicles with electric vehicles before their natural life cycles end—an opportunity, the researchers noted, to take advantage of new federal funds for electric school buses, fire trucks, and public works vehicles.

But mayors are less supportive of measures that would establish energy use restrictions. Less than half of respondents, for example, said they favored restricting the use of gas stoves in homes, or instituting traffic congestion fees to make driving more costly. Restrictions on gas-powered lawn tools, or gas and oil heat in new private construction, also had only lukewarm support.

Figure 15: Courtesy of the Initiative on Cities

The survey found that mayors are sensitive to economic concerns—57 percent said they are concerned about rising energy costs—and to their local political environment in regards to addressing climate change. “I don’t think it’s totally shocking, but it’s important to see that there was less support for some of the actions that the climate science community would suggest would make a bigger impact, but that is politically harder,” Glick says.

In addition, Glick says state governments can weigh in. For example, at least 20 states have passed laws that prohibit cities from banning natural gas.

Even with such constraints, cities across the country have implemented local projects and programs to address climate change, says Katharine Lusk, IoC codirector and a contributor to the report.

A number of cities, including Los Angeles and Phoenix, have appointed “chief heat officers” to lead community responses to extreme heat.

In 2021, Mayor Satya Rhodes-Conway of Madison, Wis., saw her city become the first in North America to operate an electric fire truck. In 2016, Louisville, Ky., (under former mayor Greg Fischer) implemented its Cool Roof Incentive Program, which allows building owners to paint a flat roof white, or install light-colored shingles to reflect heat, in exchange for city payments up to $2,000 for residences and $10,000 for nonresidential buildings. And, last year, Boston Mayor Michelle Wu launched a plan to renovate and replace aging school buildings while making them more energy efficient.

The federal government’s moves to encourage clean and renewable energy investments injects fresh momentum into the efforts of mayors across the country, says Lusk.

“US mayors have been really leading the charge, even in the absence of state-level support in some places around climate action. And now they’ve got the resources to do real big things,” Lusk says.

The 2022 Menino Survey of Mayors marks the ninth annual release of findings. Researchers noted that while national debates about hot-button issues such as climate change can be divisive, the nation’s mayors are largely in sync. In the survey, 90 percent of mayors said they believe that human activities have caused climate change. The partisan split here is notable—95 percent of Democrats hold this view compared to 71 percent of Republicans.