Mr. Chao Qi is the recipient of the 2015 Vertex Scholar Award.  He is a 4th year graduate student in the group of Prof. John A. Porco.  Chao was selected based on his demonstrated excellence in organic chemistry.  He  has developed extremely elegant and enabling synthetic methodology towards two different natural products, making reactions work, and building complex natural product architectures.  Highly productive, he has two major publications, with a third manuscript nearing completion.  In addition, Chao plays a leadership role in the Porco laboratory and is currently mentoring an undergraduate researcher.

The 2015 award is made possible by Vertex Pharmaceuticals which has provided this generous graduate fellowship in organic chemistry for an exceptional 2nd, 3rd or 4th year graduate student in our Ph.D. program. The BU-Vertex Educational Partnership Program, established in 2010, offers scholarships funded by Vertex Pharmaceuticals, a biotechnology company-based in Cambridge, Massachusetts, US.

As an undergraduate, Ariel explored many aspects of chemistry, working in three different laboratories at Brandeis to learn organometallic techniques and instrumentation (with Professor Christine Thomas);  engineering-based materials research (with Professor Seth Fraden); and oscillatory chemical reactions  (with Professor Irving Epstein).   Coming to BU, she decided to join the Doerrer Group and work on a project that focuses on synthesizing one-dimensional, heterobimetallic nanowires supported and bridged by carboxylate ligands. The infinite chains found in the crystals of these complexes will be tested for electronic conductivity to understand the fundamental design principles needed to produce highly efficient nanoscale wires for electronic devices. Other research directions within the Doerrer lab include C-H and O-H bond oxidation and facile synthesis of zero-valent iron nanoparticles.

Ariel, who minored in political science as an undergraduate, is also committed to scientific outreach, believing that a vibrant scientific community is vital to the health and development of society, at the both local and national levels.  She and Professor Doerrer have exciting plans to develop a bilingual English/Spanish outreach program for the elementary school students.  Their aim is to engage students from one of the most underrepresented groups in the sciences in the excitement of chemistry. 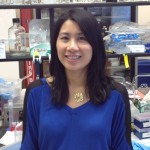 Jennifer Chow, a third-year graduate student in the group of Professor Adrian Whitty, has received an NIH Ruth L. Kirschstein National Research Service Award (NRSA).  Jennifer received the award for her initial submission, which is a singular honor given how competitive this award is each year.  Jennifer will receive 4 years of support to pursue her project, "Activation and Signaling Mechanism of the RET Tyrosine Kinase Receptor."

The goal of Jennifer's project is to develop a system using Forster resonance energy transfer (FRET) to understand the changes that occur upon binding of ligand to growth factor receptors. Aim 1 will develop the FRET constructs, which will be used in Aim 2 to investigate the mechanism of RET (REarranged during Transfection receptor) activation in cell culture. In Aim 3, potential crosstalk between the RET and vascular endothelial growth factor receptor 2 (VEGFR2) pathways will be investigated.  The research will aid in the physical understanding of growth factor (GF) receptor activation and how aberrant GF receptor signaling in cancer might be therapeutically modulated.

Jennifer received her undergraduate degree from San Francisco State University (CA) and worked at an academic lab for three years after graduation. She came to BU in 2011 and joined Prof. Whitty's research laboratory, which focuses on quantitative approaches to various fields of chemical biology.  In addition to her research, Jennifer is currently the president of the Chemistry Department's student organization, BUYCC. 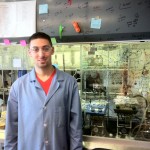 Matthew Golder is the recipient of the 2013-2014 Vertex Scholar Award.   The award is in recognition of his scientific creativity and leadership.  Matt is a fourth-year graduate student in the group of Prof. Ramesh Jasti.

Matt has been working for the past 3 years in the development of synthetic procedures to produce cycloparaphenylenes, the simplest sub-segment of a metallic armchair carbon nanotube. His efforts have lead to three publications thus far (most recently a first author paper in Chemical Science) and several presentations at national meetings.

Matt is the fourth Vertex Scholar in the Department. The award is made possible by Vertex Pharmaceuticals, a biotechnology company based in Cambridge, Massachusetts.    Each award funds a student’s stipend, fees, and travel to conferences for one year.   As part of its aim to promote cooperation between industry and academia, Vertex provides the Scholars with access to mentoring from their scientists. Vertex, with a market capitalization of more than $7.2 billion, is committed to the discovery and development of breakthrough small-molecule drugs for serious diseases.

For a second year in a row,  Prof. Ramesh Jasti's  group has hosted students from the Steppingstone Foundation to share with them the excitement of nanoscale research.   Steppingstone is a non-profit  that develops and implements programs which prepare urban schoolchildren for educational opportunities that lead to college success. 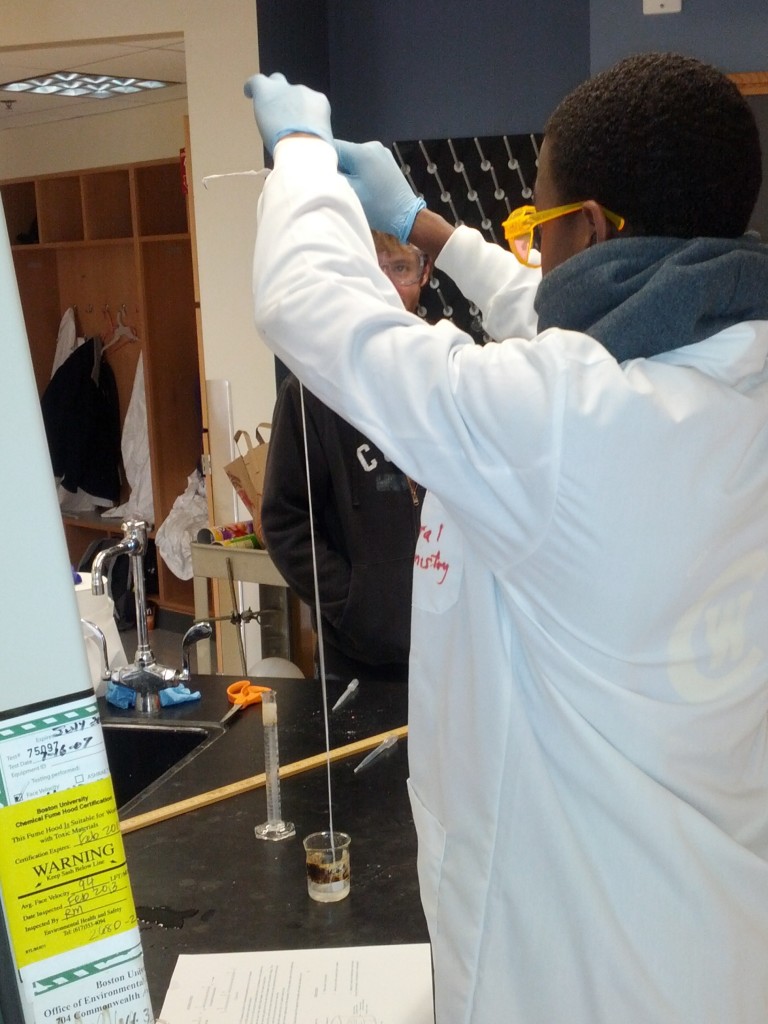 This year the students learned about nanoscale materials and how their unique properties are a function of their size. The day started with  fun demonstrations of liquid nitrogen and an "explosive" Pringles can. The students then paired off to perform two separate hands-on laboratory experiments. The first lab illustrated the principle of chemical sensing. Using glow sticks, students analyzed a number of molecules to determine their anti-oxidant properties. Strong anti-oxidants would result in decreased fluorescence that visually detectable. This approach to sensing molecules is of strong interest for detection of environmental pollutants, food safety, product testing, water treatment, explosives detection an 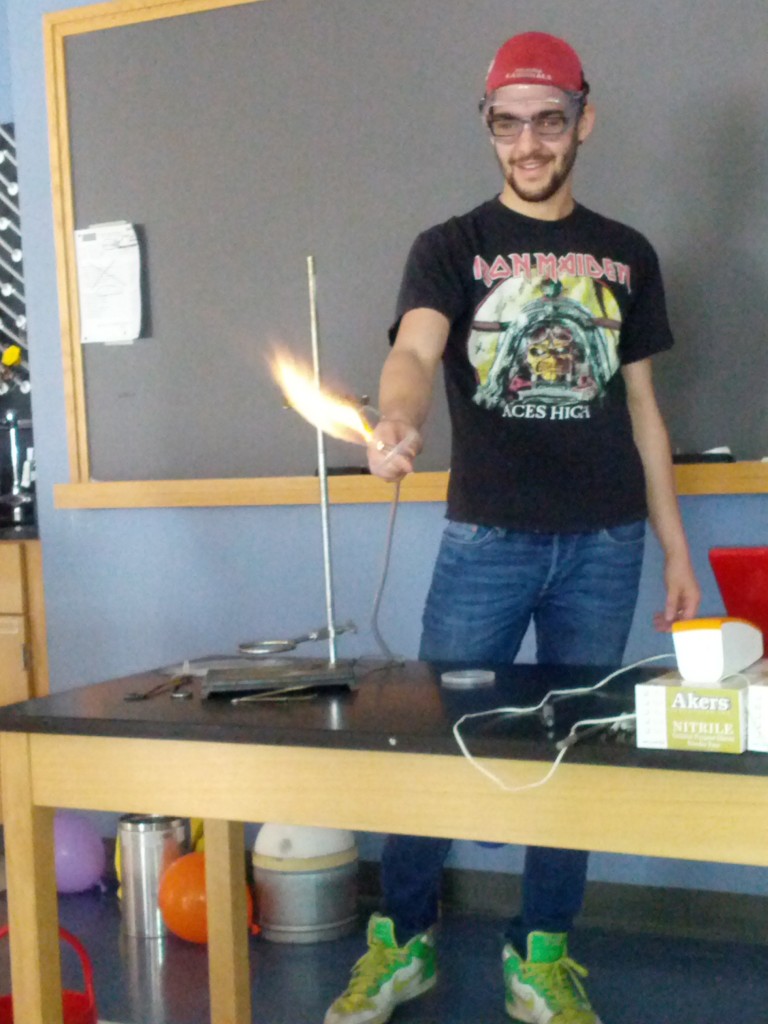 The second lab was designed to teach the students about the importance of polymers in modern life, particularly as they relate to material applications. The student pairs synthesized their own Nylon strands. To "up the fun factor," they were challenged to a contest to see who could produce the longest continuous piece. With a prize of candy bars on the line, the students took the challenge seriously.

The day wrapped up with a casual pizza lunch, with the visitors asking lots of questions about not only graduate school, but college life and what being a science major is like. The graduate students had as much fun as the high school visitors, and look forward to the continued partnership of the Steppingstone Foundation and the Jasti Group. 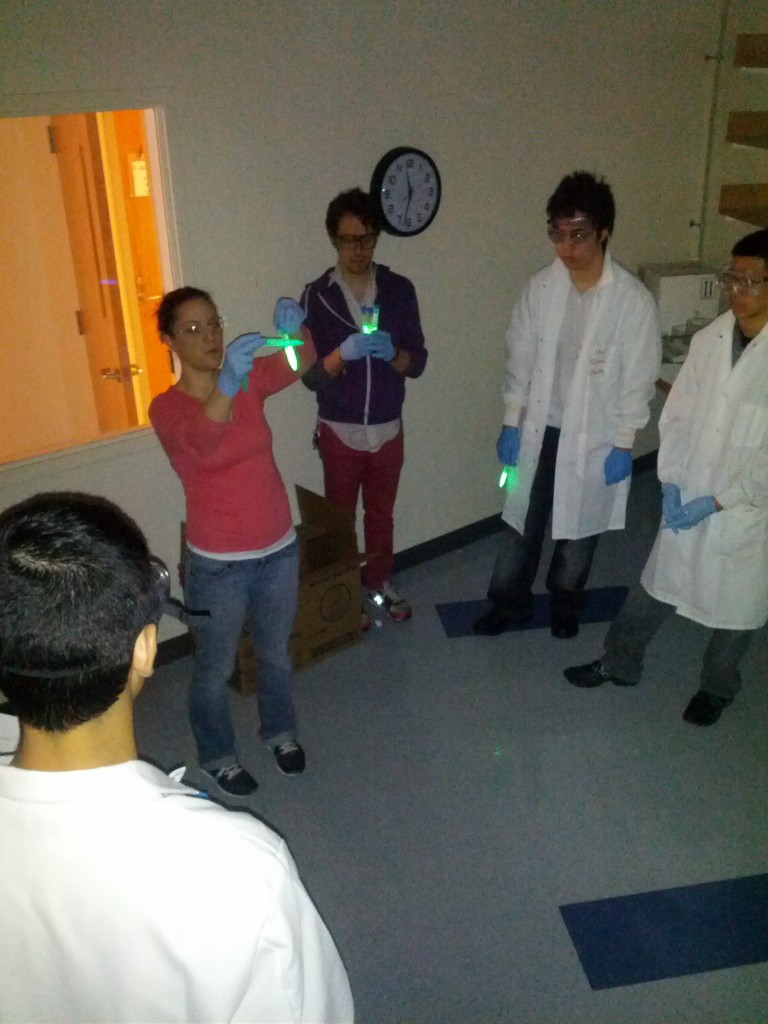 There were 15 applications from high school students for the summer research opportunity.  Of these three were selected:

BUWIC, formed in 2005 by female graduate students in the Department, has provided its members with industry career seminars, educational workshops, networking opportunities, and with speakers from both ‘traditional’ scientific career paths (pharmaceutical industry, academia, national laboratories), as well as ‘non-traditional’ paths (science journalism, patent law, contract research).  While membership is inclusive, the organization focuses on issues of particular relevance to women training for and seeking scientific careers that build on their training in Chemistry.  In 2010, BUWIC initiated outreach activities to local area schools  in support of chemistry education through volunteers who teach labs, lead chemistry demonstrations, tutor, and assist teachers. 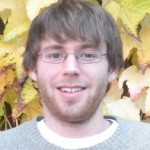 Fourth-year graduate student Thomas Sisto in Prof. Ramesh Jasti's group has been awarded the 2013-2014 AstraZeneca Fellowship in Organic Chemistry. The award is in recognition of his scientific creativity and productivity.

Tom joined the Jasti research group as a Dean’s Fellow in the Summer of 2010. Since then he has published four papers (three as a first author). Currently Tom's research aim is to synthesize a carbon nanotube by organic synthesis. Achieving this goal will be an enormous accomplishment for organic chemistry, as well as for materials science. At the same time, he has developed a collaborative project with Prof. Colin Nuckolls' group at Columbia University to use  cycloparaphenylenes as “seeds” to “grow” uniform carbon nanotubes by traditional chemical deposition methods. The types of nanotubes that would be produced in this proces
s would be of the armchair variety, which has 1000-fold conductivity relative to copper and would be a major achievement.  AstraZeneca is a global innovation-driven biopharmaceutical company specializing  in the discovery, development, manufacturing, and marketing of prescription medicines  healthcare. 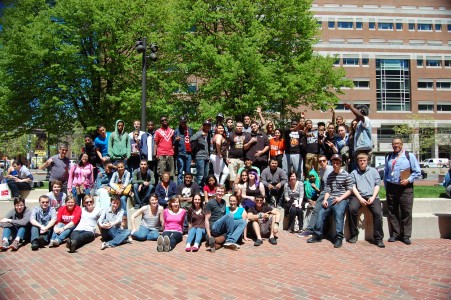 This May, the BU Department of Chemistry, in collaboration with the student organization, BU Women in Chemistry (BUWIC), hosted 85 students from English High School and Brighton High School (BHS) for our fifth annual Chemistry Day.   The successful day was coordinated by third-year graduate student, Kathryn Summo (Schaus Group), the BUWIC Outreach Coordinator, with the assistance of faculty, graduate students, and undergraduates.  Photos taken by the participants can be seen on flickr. 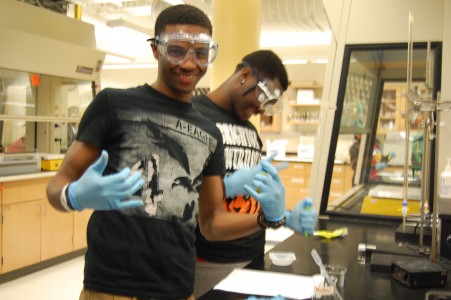 The day started with demonstrations of liquid nitrogen, the sublimation of carbon dioxide with pH indicators, and making “Elephant’s Toothpaste,” which according to BHS teacher, Ralph Bledsoe, created "oohs and aahs."  Students then spent time in undergraduate teaching labs performing experiments in the electrochemistry of metals (a variation on a CH 101 undergraduate lab experiment) and identifying antioxidants using glow sticks.  Students then toured state-of-the-art Chemistry and Biology research laboratories with graduate student and postdoctoral researchers who described their work and what it was like to work in a research lab.  The high school participants learned about about major instrumentation (e.g., NMR spectrometers and GC/MS instruments). They also entered a fruit fly lab with high-magnification microscopes fitted with video feeds and light filtration apparatuses.  The day was capped off with a BBQ sponsored by the Department of Chemistry. 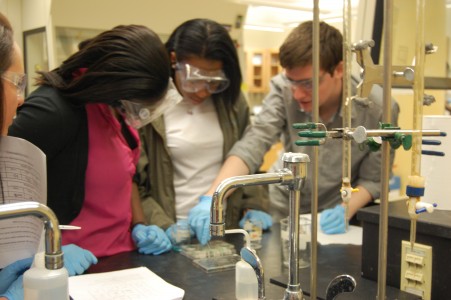 BU Chemistry Day is the conclusion of an outreach program coordinated by BUWIC  during the spring semester. Throughout the course of the program, eight BU undergraduate students visited AP, honors, and multilingual chemistry classrooms at English High School and Brighton High School every other week to mentor students, assist teachers with instruction,  perform demonstrations, and coordinate hands-on experiments. 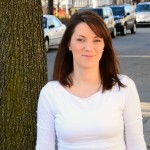 The American Association of University Women (AAUW) has awarded Liz Hirst, a fifth year graduate student in the Jasti Group, with a year-long American Fellowship that will enable her to complete her dissertation research in the next year.

Hirst's research is highly interdisciplinary, combining chemistry, physics, and materials science.  The focus of her work is the synthesis of novel cycloparaphenylenes (CPPs) with nitrogen incorporated into the backbone. CPPs represent the smallest unit cell of a metallic carbon nanotube (CNT). Also termed carbon nanohoops, CPPs consist of all para linked benzene rings.  Nitrogen-doped CPP synthesis will enable a fundamental exploration of the structure-property effects of adding nitrogen to carbon networks. This could serve as an empirical model system for understanding the electronic changes in nitrogen-doped graphitic materials. It will also allow for correlation of theoretical predictions to reality. This synthesis will also enable construction of novel carbon-based materials. Specifically, once the target CPPs are synthesized, Liz will explore incorporation of these molecules into 3-d porous carbon-based frameworks. These frameworks may have uses in energy storage and small molecule detection.

In addition to pursuing her research, Liz Hirst works to promote the representation of women in the sciences.  She has played a leadership role in the BU Women in Chemistry, currently serving as the organization's president. A hallmark of her presidency has been outreach to local area high schools and the Girl Scouts to enable students to participate in and experience chemistry research. 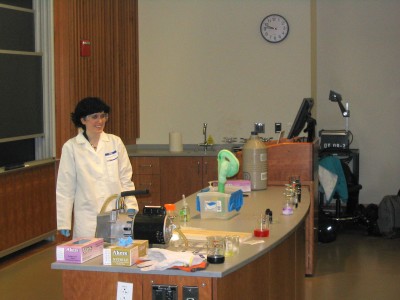 BU Chemistry hosted more than 100 students from the Boston Community Leadership Academy (BCLA) and English High School on May 4, 2012 for the fourth annual Chemistry Day. The morning long program began with a demonstration session given by BU Chemistry undergraduates and coordinated by Postdoctoral Faculty Fellow (PFF)  Dr. Seann Mulcahy. The demonstration explored pH, having fun with liquid nitrogen, synthesizing nylon, and making "Elephant's Toothpaste." After the demonstration, students spent time in our undergraduate teaching labs performing experiments in electrochemistry of metals (a variation on a CH 101 undergraduate lab experiment), electrolysis of salt water, and identifying antioxidants using glow sticks. These experiments were coordinated by PFF Dr. Katie Frato with assistance by BUWIC (Boston University Women in Chemistry) president Sarah Soltau and undergraduates. Students also attended tours of state-of-the-art chemistry research labs, seeing major instrumentation such as NMR spectrometers and GC/MS instruments and testing a glove box. During these tours, graduate student and postdoctoral researchers also described their work and what it was like to work in a research lab. The morning was capped off with a BBQ sponsored by the department. Photos from the event can be seen at the BU Chemistry Flickr site. 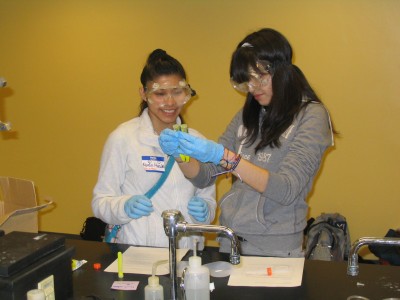