The Stanley P. Stone Distinguished Lecture Series brings notable, inspiring speakers to the College of General Studies (CGS), inviting the CGS and BU community to broaden their educational experience related to one of the College’s academic division areas: humanities, social science, natural sciences, or rhetoric. Lecture topic areas span the genres, from environmental change and violent conflict to the biology of viruses and public health; from racism in the U.S. to musical theatre and the American urban experience; from the evolution of goodness to American foreign policy. Instituted in 1989, the College is grateful to offer this enriching experience on an annual basis, made possible by the generosity of Stanley P. Stone (CGS’64, Questrom’66). 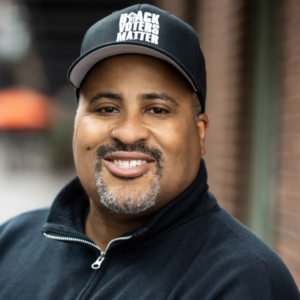 Cliff Albright is a 2020 Soros Equality Fellow and co-founder of Black Voters Matter Fund (and BVM Capacity Building Institute) which builds community and organizational capacity related to Black voting power. BVM received national attention in 2017 when they helped mobilize Black voters during the U.S. Senate race between Doug Jones and Roy Moore. Since then, Cliff and the BVM team have traveled throughout thirteen primarily southern states in “The Blackest Bus in America” energizing voters and exposing voter suppression.

Cliff serves as an instructor of African-American Studies at several universities. Cliff previously lived in historic Selma, Alabama, where he focused on bringing financial resources to Alabama’s blackbelt region. Cliff attended Cornell University, where he obtained his B.S. in Applied Economics and an M.P.S. in Africana Studies. He also has an M.B.A. from the University of Alabama. Cliff has contributed articles to and been featured on MSNBC, CNN, New York Times, Blavity, The Guardian, and Full Frontal with Samantha Bee.

The Science of Sabermetrics

Reaffirming My Passion Through CGS

For the 2018 Stanley P. Stone Distinguished Lecture Series, Peter Shankman, best-selling author and worldwide speaker, spoke to a CGS audience about channeling the power of the ADHD brain.

Award-winning graphic novelist Lynda Barry spoke on how to harness creativity for the 2017 Stanley P. Stone Distinguished Lecture. The New York Times has described Barry as “among this country’s greatest conjoiners of words and images.”