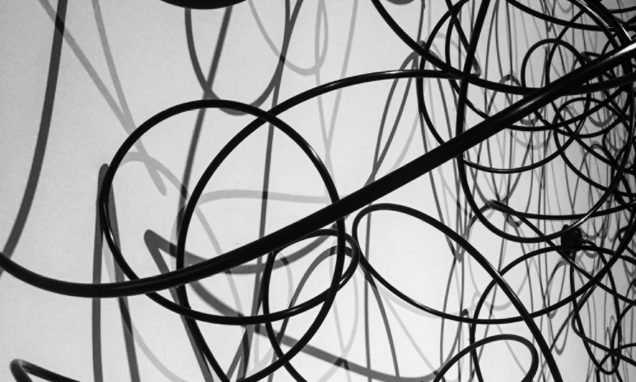 Crossroads (Choreographies) is a multidisciplinary project that explores the idea of movement through an exhibition supported on different media (installation, sculpture, video, etc.). Curated by Raquel Peula and Fran Ramallo, this is the first solo exhibition of artist Rosana Antolí in the United States. Antolí brings us ‘collective choreography’ with a new perspective on transit and moving identities. In her own words, her work “focuses on the rhythm of urban spaces and the geographical gestures of the human body.”

By living in a globalized world, we all increasingly follow imposed itineraries. Art – a mirror of life in transit that is never detached from the many forms of human movement – offers new possibilities of motion, more gentle and amiable, to reflect upon. The space and the circular structures filling it establish a route that incorporates old codes and new interpretations. The spectator is inevitably transformed into another element in transit, provoking further possibilities for reflection where physical movements – and encounters – lead to psychological shifts. To think is to move.

Parallel to the art project,  a discussion panel will be held at the on May 23rd, from 1 to 2 p.m. at the Pardee School of Global Studies. Click here for more information.

Hors d’oeuvres will be served.

Boston University Voces Hispánicas/Hispanic Voices, an initiative of the Department of Romance Studies at the College of Arts and Sciences, Metropolitan College, the Center for Humanities (BUCH), the School of Visual Arts at the College of Fine Arts, the Arts Initiative, the Art Galleries, and the Center of European Studies at the Pardee School of Global Studies. In conjunction with Santander Universities, and Spain Arts & Culture.

Rosana Antoli is an artist whose practice combines performances, moving images and drawings. Rosana focuses on the intersection of art, politics and everyday life, and how to reveal the hidden choreographic commands that impose behaviors, acts and motions. The utopian character is central to her work, and consequently so are the failure and absurdity of the actions involved. She has exhibited in galleries and museums worldwide including ARCOmadrid, Madrid, Spain; Royal College of Art, London, UK; Centro de Arte Contemporáneo Wilfredo Lam, Havana, Cuba; Delf Museum, Delf, The Netherlands; Fundació Joan Miró, Barcelona, Spain or Bürkliplatz Zürich, Parallel Event Manifesta 11, Zurich, Switzerland. Next September, Antolí will open the 2019-20 season of her gallery Espai Tactel (Valencia).

Raquel Peula is an arts project manager and curator with a MS in Arts Administration from Boston University. She completed her bachelor’s degree in Slavic languages at the University of Granada, Spain. During a four-year residency in Russia she developed a great passion for the arts and its impact on people’s lives. Raquel spent two years as the cultural and arts manager at the Embassy of Spain in Ukraine, which allowed her to work closely with renowned Spanish and Ukrainian artists involved in multiple disciplines. She currently acts as the academic program manager for the Arts Administration program at Boston University, while working on both visual and performing arts projects at an international level.

Francisco Ramallo is a curator, professor and researcher with a PhD in Art History from the University of Granada, Spain. He completed a MA in Museology, Contemporary Language Art and Poetics, Cultural Management, as well as in Art Production and Research. He has been a visiting scholar at the City University of New York, and has produced several texts during his stays. Ramallo analyzes the role of art in the context of cultural studies, and the connections between art and literature. He has partnered with several American university programs, and now teaches contemporary art at Boston University in Madrid while also working on projects as an exhibition curator.

For any inquiries please contact our Communications Manager and Assistant Curator Louise You Cao at caoy@bu.edu