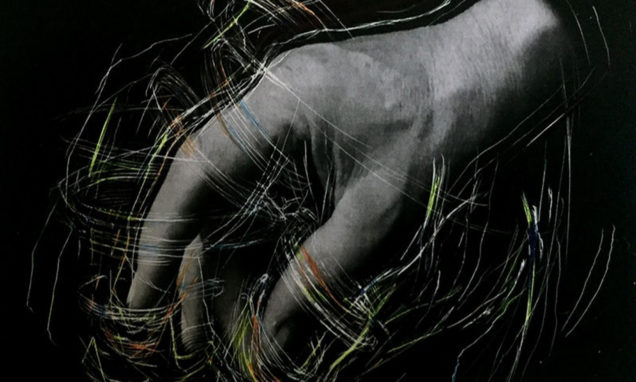 A discussion panel will be organized as part of the Crossroads(Choreographies) exhibition, the first solo exhibition of artist Rosana Antolí in the United States, who brings us ‘collective choreography’ with a new perception of transit and moving identities. In her own words, her work “focuses on the rhythm of urban spaces and the geographical gestures of the human body.”

The panel will explore the idea of movement from different disciplines – those that address individual and collective identity issues, and those that analyze migration movements – and how it translates into the artistic field.

The panel will be moderated by Raquel Peula, arts project manager and curator, and will include guest panelists:

Light lunch will be served.

Boston University Voces Hispánicas/Hispanic Voices, an initiative of the Department of Romance Studies at the College of Arts and Sciences, Metropolitan College, the Center for Humanities (BUCH), the School of Visual Arts at the College of Fine Arts, the Arts Initiative, the Art Galleries, and the Center of European Studies at the Pardee School of Global Studies. In conjunction with Santander Universities, and Spain Arts & Culture.

Rosana Antoli is an artist whose practice combines performances, moving images and drawings. Rosana focuses on the intersection of art, politics and everyday life, and how to reveal the hidden choreographic commands that impose behaviors, acts and motions. The utopian character is central to her work, and consequently so are the failure and absurdity of the actions involved. She has exhibited in galleries and museums worldwide including ARCOmadrid, Madrid, Spain; Royal College of Art, London, UK; Centro de Arte Contemporáneo Wilfredo Lam, Havana, Cuba; Delf Museum, Delf, The Netherlands; Fundació Joan Miró, Barcelona, Spain or Bürkliplatz Zürich, Parallel Event Manifesta 11, Zurich, Switzerland. Next September, Antolí will open the 2019-20 season of her gallery Espai Tactel (Valencia).

Alejandra St. Guillen was appointed by Mayor Martin J. Walsh in 2014 as the Director of the Mayor’s Office for Immigrant Advancement with a mandate to strengthen the ability of residents from diverse cultural and linguistic communities to fully participate in the social, economic, cultural and civic life of the city. Prior to her appointment, Alejandra served as the Executive Director of ¿Oiste?, a statewide Latino Civic and Political Organization. In this role, she collaborated with state legislators and other government officials in the development and promotion of Public Policy initiatives that have directly impacted the Latino community in Massachusetts. These policies include Education Reform, Economic Justice Policy and Electoral Reform. Alejandra has demonstrated a strong commitment to social justice, and has worked tirelessly as an educator, community organizer and non-profit leader.

Jean Jackson is a professor of Anthropology (Emerita) at MIT and a Margaret MacVicar Faculty Fellow. She received her B.A. from Wellesley College in Sociology/Anthropology, and her M.A. and Ph.D. from Stanford University. In 2014, Jackson retired after 42 years of dedicated service to MIT. She has carried out fieldwork in Mexico, Guatemala, and Colombia. Much of her work has been concerned with social identity and the ways in which gendered, linguistic, religious, and ethno-racial identity components interact. She became particularly interested in the remarkable shift from state assimilationist policies to multiculturalist ones occurring in Colombia and elsewhere in Latin America. Specific concerns motivating this research include the valorization of indigenous difference, the impact that state and indigenous mobilizing efforts have on each other, indigenous self-representation, para-statal and transnational actors, customary law, reindigennization, and the politics of culture.

Raquel Peula is an arts project manager and curator. She is also the academic program manager for the Arts Administration program at Boston University. She has a vast array of international experience, and has organized over fifty events in both visual and performing arts. Raquel completed a bachelor’s degree in Slavic languages from the University of Granada, Spain. During a four-year residency in Russia she developed a great passion for the arts and its impact on people’s lives. She spent two years as the cultural and arts manager at the Embassy of Spain in Ukraine, which allowed her to work closely with renowned Spanish and Ukrainian artists involved in multiple disciplines. She moved to Boston to pursue a master’s degree in Arts Administration from Boston University, where she graduated in May 2014. From 2015 to 2017 Raquel served as executive director for the arts series Cervantine Stories, Quixotic Moments, which commemorated the 400th anniversary of the publication of Don Quixote and the death of Cervantes. She is currently developing a new series of visual and performing arts projects at an international level.

For any inquiries please contact our Communications Manager Louise You Cao at caoy@bu.edu