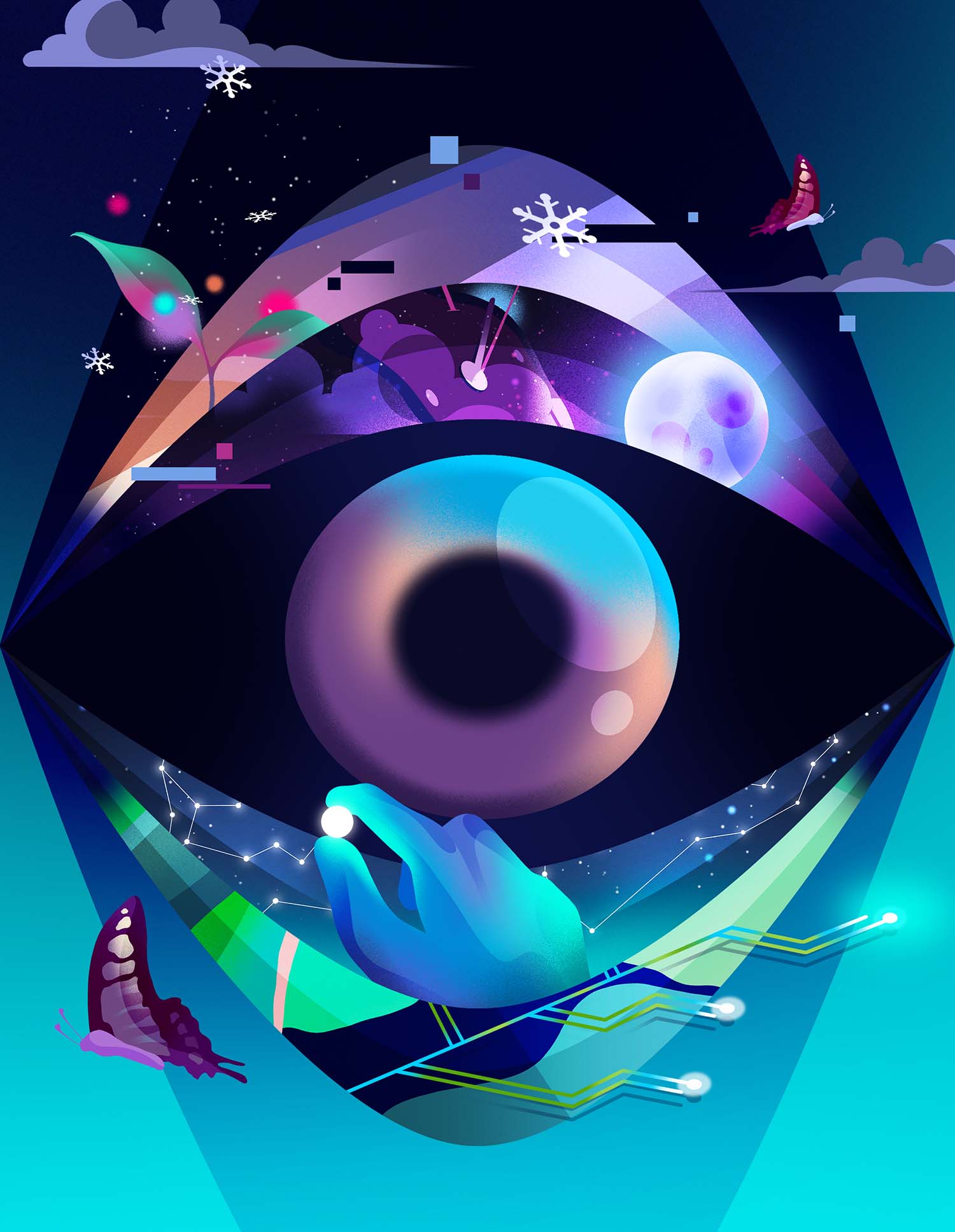 Kim Stanley Robinson on the Importance of Imagination

“Our human ability to imagine different futures is a skill we can sharpen with analysis and practice,” says science fiction writer and alum

Through the winter of 1974–75, I would hike from Allston east along Comm Ave, wearing my backpacking down jacket and yet still freezing my butt off—it was probably only about 40 degrees, but I was from southern California—hoping that I could find Boston University. I was still having trouble locating the campus—if campus was the word. I had come from UC San Diego, which was nothing but campus in those days, isolated on a bluff over the Pacific. I wasn’t used to a college that was integrated into the texture of a city, its buildings alternating with all kinds of other stuff. I only managed to figure BU out in a minimalist way, in that I could find my classes (usually), but I never did get a full sense of the University as a physical space. I wasn’t sure where it ended and the rest of Boston and the world began.

Kim Stanley Robinson (GRS’75) is a science fiction writer, the author of about 20 books, including the internationally best-selling Mars trilogy, as well as Red Moon, New York 2140, and The Ministry for the Future. He was part of the National Science Foundation’s Antarctic Artists and Writers’ Program in 1995 and in 2016. In 2021, he was invited to speak at COP26 in Glasgow by the UK government and the UN’s Future Resilience Labs. His work has been translated into 27 languages, and has won the Hugo, Nebula, and Locus Awards, among others. In 2016, asteroid 72432 was named Kimrobinson.

Now I think this is a good image for Boston University as I have come to understand it, after learning more about it in various media. All that has taught me that BU is very well connected with the rest of the world, its faculty and students doing all kinds of interesting work in collaboration with industry, government, and civil society.

I’m happy to say that my career as a science fiction writer had its tentative beginnings at BU. Between my classes I would go to the library, find an empty carrel, sit down, and immediately plunk my head on the table and fall asleep. Faced with the overwhelming task of writing fiction, my mind would shut down for a while, perhaps reorganizing itself to face the strange task I was imposing on it. We’ll learn more about the mysteries of sleep in one of the articles in this issue.

For me, my naps would last around 20 minutes, after which I would wake up and work on a story I later titled “Coming Back to Dixieland.” It concerned asteroid belt miners who played jazz on the side—not a great idea for a story, but it got published a few years later in the anthology Orbit 18, edited by my great teacher and mentor Damon Knight. It took me all winter to write, my efforts so slow that I counted myself lucky to finish a paragraph per session. It helped that my professors at BU were so encouraging; I feel immense gratitude to John Malcolm Brinnin, George Starbuck, Arthur Freeman, Rick Stone, and Millicent Bell. Every one of them, when I told them I was writing science fiction, said to me, “Good for you! How can I help?”—which was not so common a response in those days. They were living examples of BU’s openness to the world.

So, I am very pleased to see this special issue of Bostonia, because it is so science fictional, exploring many topics I’ve pursued for years in fiction, which have now become part of our present world. One of my novels, for instance, is narrated by a quantum computer; here you will read of new ways of creating qubits and stabilizing such computers. That novel was about the impossibility of humans reaching even one of the nearest stars, Tau Ceti, 12 light-years away; one of this issue’s articles discusses stars and galaxies 480 million light-years away. It’s another example of the size of not just the universe, but of the imaginations of astronomers and astrophysicists.

For years now I’ve been saying that science fiction is both prophecy and metaphor. When a story is about time speeding up, or someone turning into a robot, this is a way of expressing the way things feel to us. But now these prophecies and metaphors are also facts. I have become a cyborg, and so have many other people, and this integration of humans with our technology, what you could call cyborgification, will only increase in the years to come—not because it makes us more than human, but because it keeps us alive. We’ll learn more about that here too.

All these amazing projects begin with imagination. Thinking about what isn’t there, thinking about the future—yes, of course I love that this is in effect a science fiction issue of Bostonia. That’s entirely appropriate, because we are now living in a giant science novel that we all cowrite together. And it’s not that hard for us, because we’ve always been thinking science fictional thoughts about our personal lives. We imagine good things happening to us; that’s our utopia. We worry about how things could go wrong; these are our dystopias. You don’t need too many dystopias. Better to focus on utopia, as I have in my career as a novelist.

Our common human ability to imagine different futures is a skill we can sharpen with analysis and practice. When expanded and elaborated and written down, it can become a science fiction novel; expanded in other ways, it can become a scientific investigation or an individual’s life project. Imagination is therefore itself a crucial topic for research and deserves more study and discussion.

I’ll end by saying thank you to Boston University for one of the most exciting years of my life. I never imagined that what followed could go so fast or be so interesting.

Kim Stanley Robinson on the Importance of Imagination