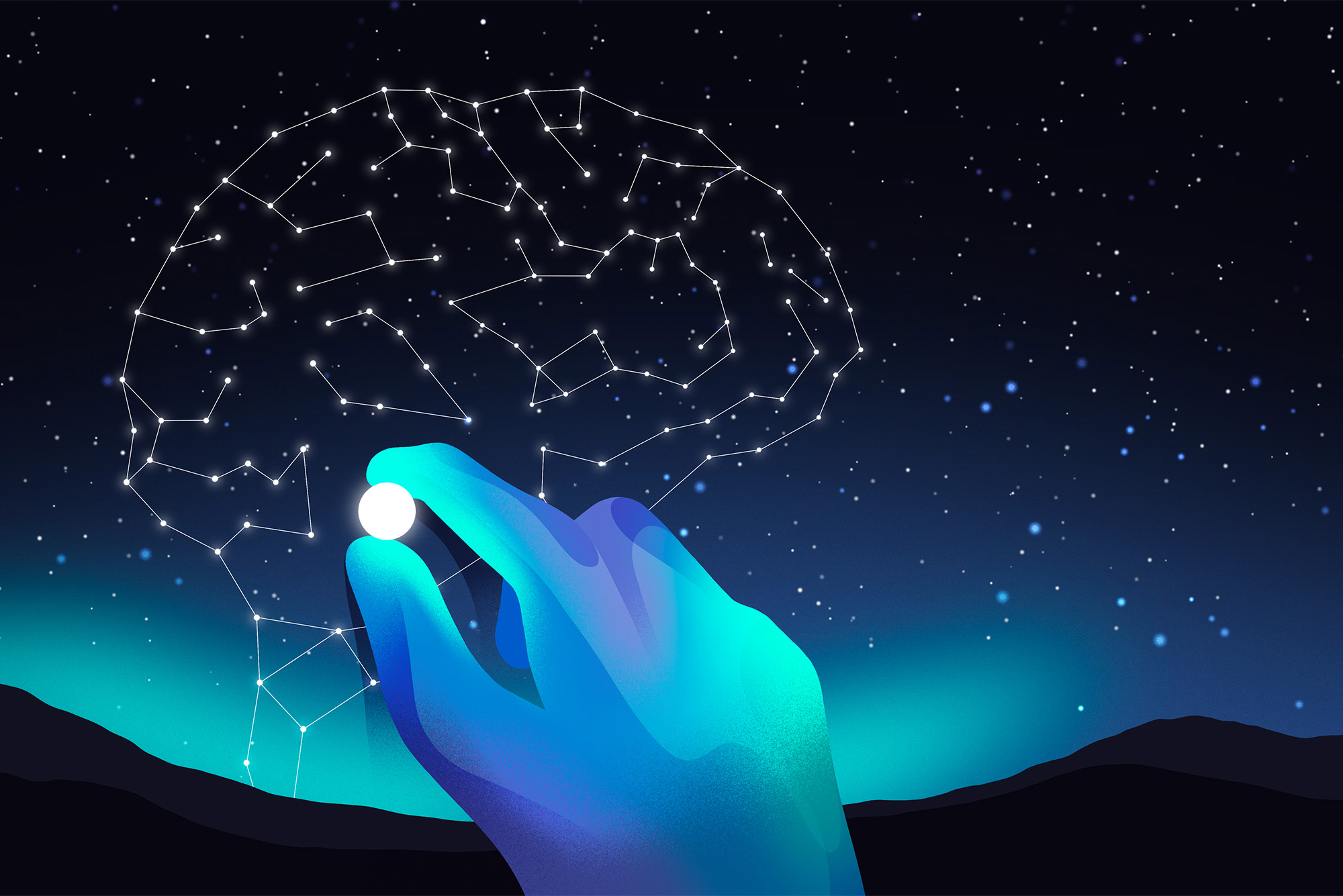 To study the farthest reaches of the universe, BU astrophysicists employ NASA telescopes, gather data, and embrace the unknown

from dark matter particles shaping galaxies millions of light-years away to the plasma shield radiating from the sun.

Of course, it’s not magic. Theoretical astrophysics is a combination of careful calculations, extraordinary advances in our ability to image far-off worlds, and imagination—all of which help us to better understand our solar system and the cosmos far beyond.

Astrophysicists use a variety of methods—including telescope and deep-space probe observations, digital simulations, light frequency data, and other computational tools—to see into the depths of the universe. But with so much still unknown, they must also embrace ambiguity and be comfortable thinking about, and trying to explain, phenomena and celestial bodies that we haven’t actually seen—yet. They do this using computational models to simulate various cosmic scenarios—simulations that allow them to develop stunning, luminous images we can all appreciate.

Elizabeth Blanton calls herself an observer. She does her research based mostly on analyzing light data at different wavelengths, including visible light, infrared, radio light waves (which are a longer length), and X-ray (which is a shorter wavelength than the rest).

“I wanted to do [research on a] larger scale in the universe, and think about where do we come from, where are we going,” says Blanton, a College of Arts & Sciences associate professor of astronomy and director of BU’s Institute for Astrophysical Research. She looks many, many light-years past Earth’s little slice of space in order to visualize other galaxies that pop up in formations called galaxy clusters, which can include anywhere from hundreds to thousands of galaxies. (The Milky Way is not in a cluster, but we have about 40 galaxy neighbors that we know about, including the Andromeda galaxy.) Galaxies, all of which have stars and planets like our own, sometimes cluster together, and this is related to the conditions early on in the universe, Blanton says.

The image at left, originally published in 2011, depicts the crux of Blanton’s work—using light data at different wavelengths to map out and study the different elements of a galaxy cluster. This shows clouds of hot gas in Abell 2052, a galaxy cluster 480 million light-years from Earth, seen with X-ray data (in blue) from NASA’s Chandra X-ray Observatory overlaid on a visible light image from the European Southern Observatory’s Very Large Telescope. She is studying how clusters evolve over millions of years by observing clusters at different distances—the farther the light has to travel to reach us, the farther away and older the cluster is. Blanton also looks at the effect of supermassive black holes on galaxy formation and evolution. “Every massive galaxy has one at their core,” Blanton says. “They are part of the formation of galaxies…and we don’t know how that happens.” Black holes seem to have a role in the distribution of hot gas and thus the formation of stars. “But we don’t know exactly how the supermassive ones form in the center of galaxies,” she says.

The Mysteries of Brown Dwarfs

The most long-lived and numerous stars in the sky are called red dwarfs. They are too dim to be seen with the naked eye, but scientists think they make up 20 out of the 30 stars near Earth.

These ancient stars are also some of the smallest, and many have been found with planets orbiting them. Phil Muirhead, a CAS associate professor of astronomy, found what was once the smallest known planets detected orbiting a red dwarf beyond our sun.

The artist’s rendering below, made a decade ago, gives a good idea of how this system looks, with the small star emanating a reddish hue. Muirhead focuses on a close relative of the red dwarf, called the brown dwarf. A brown dwarf is sometimes called a “failed star,” because it doesn’t fuse hydrogen and helium as larger, brighter stars do. Like planets, brown dwarfs cool as they age and eventually stop emitting light altogether. Muirhead is working to figure out whether brown dwarfs, which would appear even smaller than the red star depicted here, host planets as red dwarfs do.

“We don’t know if planets exist around brown dwarfs, and only recently have we had the technology to search for them,” he says. “There are theories that predict that brown dwarfs should have a lot of planets, and so we’re testing that theory.”

Muirhead and his team often take observations at the Perkins Telescope Observatory, outside of Flagstaff, Ariz., and are slated to use the telescope for the next year. Their discoveries could help find potentially habitable planets.

The Formation of Stars

More than four billion years ago, our sun was a growing baby star. And like many other stars, it likely had a dramatic origin story. Catherine Espaillat, a CAS associate professor of astronomy, wants to find out what the sun looked like as a young star, a mystery that could teach us about the formation of our solar system and other stellar systems made up of planets and cosmic objects orbiting stars.

Espaillat studies the formation process of other stars. The digitally rendered image below depicts a young star named GM Aur, about 450 million light-years away from Earth. She and her team spent a month taking daily snapshots of light wavelengths emitting from GM Aur’s surface, compiling datasets of X-ray, ultraviolet, infrared, and visual light. They relied on the “eyes” of a number of telescopes, including NASA’s Hubble Space Telescope, Transiting Exoplanet Survey Satellite, and Swift Observatory, and the Las Cumbres Observatory global telescope network.

When a baby star is growing, it eats up gas and dust particles swirling around it in what’s called a protoplanetary disk. This image shows GM Aur, the glowing ball in the center, doing just that. In this case, the gas and dust particles of the protoplanetary disk are represented by the green material surrounding the bright star in the center. The particles slam into the surface of the star in a process called accretion—the same process our sun went through. Protoplanetary disks form around every developing star. They’re thought to be connected by a magnetic field, and eventually the disks fade away, leaving behind stars and planets.

Espaillat and her team’s observations confirmed for the first time the accuracy of astronomers’ accretion models that predict the formation of hotspots on young stars. Hotspots are extremely hot and dense areas on a star that form at the focal points of the accretion process. Computer models have until now relied on algorithms that calculate how the structure of magnetic fields directs particles from protoplanetary disks to crash into specific points on the surface of growing stars. Now, observable data from NASA’s “eyes” backs up those calculations. “We’ve detected thousands of planets in other stellar systems in our galaxy,” Espaillat says, “but where did all of these planets come from? Where did Earth come from? That’s what really drives me.”

“I have always been a visual person,” says Merav Opher, a CAS professor of astronomy and director of BU’s SHIELD DRIVE Science Center, a multi-agency initiative supported by NASA. She and her team are trying to understand the heliosphere, the invisible cosmic bubble that protects us from harmful radiation and particles in outer space.

Although it is a part of our home galaxy, the heliosphere is still an elusive structure, its shape and size still a matter of scientific debate. But Opher and her team have found compelling evidence that the heliosphere is unstable and irregularly shaped, and they have created a computer model that depicts the structure, at right.

The small, spherical lines inside the orange-yellow bubble represent our solar system, showing the sheer scale of the heliosphere and how far it extends beyond the sun. The red lines represent the magnetic field that comes from the galaxy wrapping around the solar system.

Opher says the more scientists learn about our own protective shield, the more we can learn about heliospheres surrounding other stars

The Search for Cold Dark Matter

Tereasa Brainerd wants to understand phenomena relevant to entire galaxies, far past the Milky Way. She is researching the pattern of smaller “satellite” galaxies found rotating around a large galaxy in the center, called a host galaxy.

Scientists like Brainerd, a CAS associate professor of astronomy, suspect that the satellites are likely located inside halos of dark matter that extend beyond the perimeter of host galaxies.

Understanding lopsided galaxies could provide clues to one of the biggest questions in astronomy—does dark matter exist? Many scientists believe that dark matter makes up the majority of the universe. The best working theory is that it is a type of particle not currently in the Standard Model of particle physics, which sums up the basic building blocks and fundamental forces that govern the universe. Dark matter particles emit no light, but their “presence can be inferred from motions of other particles and temperature,” says Brainerd.

She is interested in cold dark matter, currently a hypothetical particle thought to make up the dark matter in the universe, which scientists have been using to theorize how galaxies behave. Cold dark matter computer simulations have been able to predict the lopsided effect strikingly close to how real galaxy systems in the universe behave. Brainerd and her research partner, Adam Samuels, a PhD student in the astronomy department, have found “even more lopsidedness in the cold dark matter universe,” she says, a discovery they will continue to test.