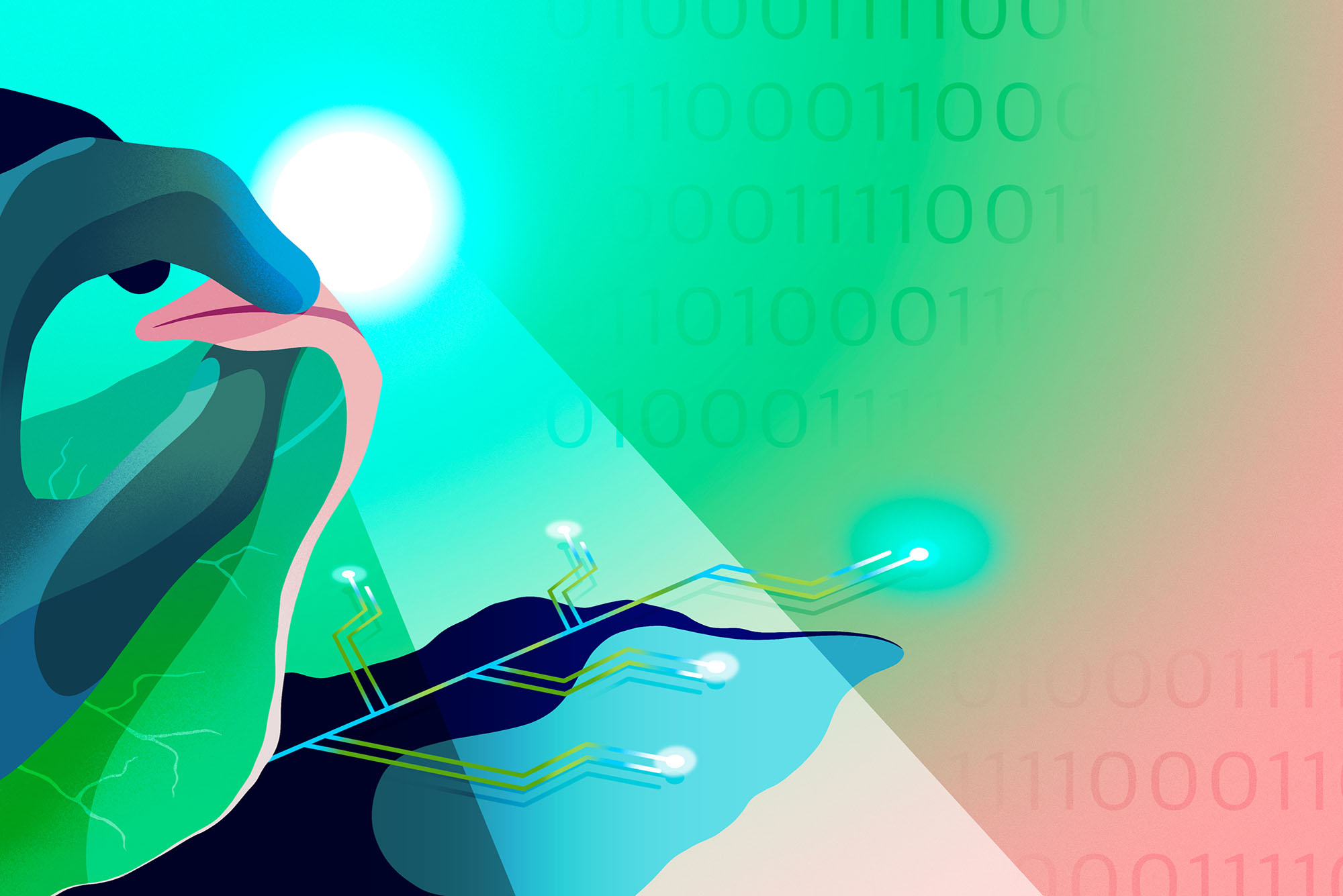 As we learned in middle school science classes, inside this common variety of greens—and most other plants—are intricate circuits of biological machinery that perform the task of converting sunlight into usable energy. Or photosynthesis. These processes keep plants alive. Boston University researchers have a vision for how they could also be harnessed into programmable units that would enable scientists to construct the first practical quantum computer.

A quantum computer would be able to perform calculations much faster than the classical computers that we use today. The laptop sitting on your desk is built on units that can represent 0 or 1, but never both or a combination of those states at the same time. While a classical computer can run only one analysis at a time, a quantum computer could run a billion or more versions of the same equation at the same time, increasing the ability of computers to better model extremely complex systems—like weather patterns or how cancer will spread through tissue—and speeding up how quickly huge datasets can be analyzed.

The idea of using photosynthetic molecules from, say, a spinach leaf to power quantum computing services might sound like science fiction. It’s not. It is “on the fringe of possibilities,” says David Coker, a College of Arts & Sciences professor of chemistry and a College of Engineering professor of materials science and engineering. Coker and collaborators at BU and Princeton University are using computer simulations and experiments to provide proof-of-concepts that photosynthetic circuits could unlock new technological capabilities. Their work
is showing promising early results.

“Within the last decade, there’s been growing interest in the quantum aspect of photosynthesis,” Coker says. Quantum describes the scale at which atoms and subatomic particles interact, exchanging energy and influencing each other’s energetic states.

Similarly, during photosynthesis, molecules are energized—or, as physicists might say, “excited”—by light absorption. When that happens, those excited molecules essentially enter so-called superposition states, in which they exist in many different states at the same time. The idea of superposition is a foundational concept of quantum computing, wherein a computer would be able to calculate many potential outcomes and factors, all at the same time. And that would exponentially scale up our current computing capabilities.

“When you excite a molecule during photosynthesis, the question arose: Is there biological significance of those crazy states during which multiple things can happen simultaneously?” Coker says.

Coker and his collaborators at BU, Ksenia Bravaya and Sahar Sharifzadeh, teamed up with Gregory Scholes, a Princeton University professor of chemistry, to investigate whether it was possible to produce and control an array of states, on the quantum level, in molecules that perform photosynthesis in plants (even the circuitry found inside—you guessed it—spinach). To control the excitation level of those molecules, they employed intricately programmed laser pulses, manipulating the spectrum of the light and the duration of emitted laser pulses so that they could tightly control the shape and properties of the beams of light hitting the molecules. More recently, they’ve been conducting their experiments on photosynthetic parts from cyanobacteria, types of microbes that generate energy from sunlight.

“Lasers are very different light sources than the sun,” Coker says. That’s because a steady stream of sunlight triggers a steady conversion of light into usable energy for plants or cyanobacteria. In contrast, the rapid-fire pulse of the team’s finely tuned lasers can shake up that process—instead of the molecules behaving in a predictable, linear manner to convert light into energy, the pulsing light can cause the molecules to enter multiple states of excitation at once.

There’s been growing interest in the quantum aspect of photosynthesis.

In Scholes’ lab at Princeton, the team has “superfast lasers that will blow your mind in how fast they can produce pulses,” Coker says. “They can pulse in durations of femtoseconds, which is a million times faster than a nanosecond.”

With those lasers, the team hopes to precisely control the creation of quantum states, and how long those photosynthetic circuits remain in certain quantum states. Because if those circuits could be tightly controlled, the team envisions that they could eventually become units (qubits, as physicists refer to them) capable of processing information at the quantum level—essentially, performing quantum computing.

Until now, one of the biggest barriers to building a quantum computer has been that it’s so hard to hang on to any one fleeting quantum state. When molecules get excited, as they do when they absorb light, Coker says, they start to interact with nearby molecules and materials. Those exchanges cause energy to dissipate rather than stay concentrated, making it challenging to freeze materials in any particular state on the quantum level.

Using Scholes’ superfast laser pulse experiments, as well as computer models developed by Coker and his BU collaborators, the team is researching how energy dissipates through materials, and how the quantum states of molecules influence whether energy stays contained or dissipates. If lasers could be used to force photosynthetic circuits to remain in certain states for longer periods of time, that would be a true breakthrough.

Now that’s something to chew on with your next serving of spinach.

“When People Don’t Have Resources, They Still Have Imagination”