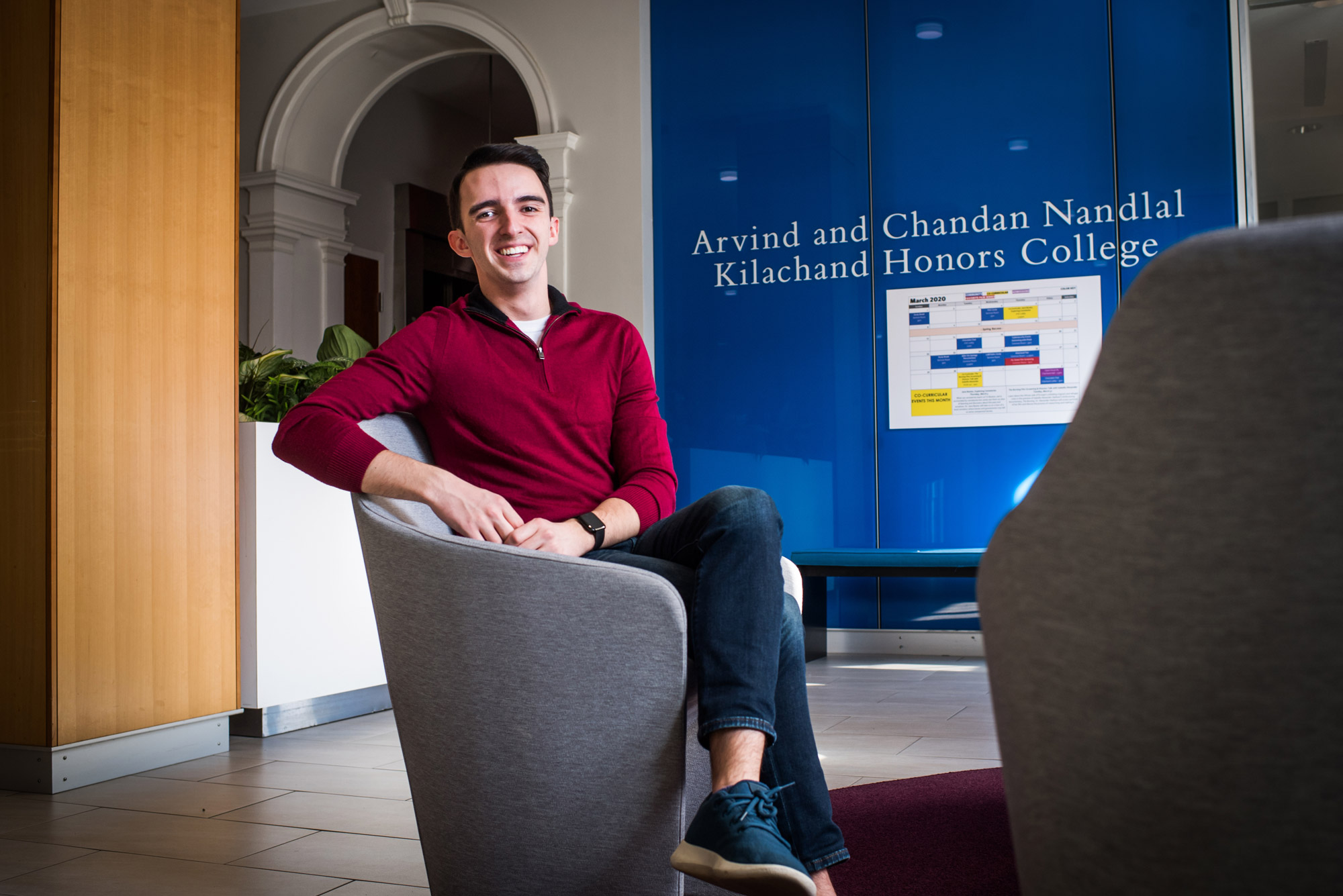 Political science student Bayley Connors has focused his time at BU on learning about how to alleviate families and children in poverty, finding programs that currently exist are falling short. Photo by Jackie Riccardi

BU student researcher Bayley Connors has unearthed the ways public policy shortcomings, like the Child Tax Credit, only exacerbate economic inequality for children in the US

As if he stepped out of a time machine, Bayley Connors, a senior at Boston University’s Arvind and Chandan Nandlal Kilachand Honors College, can recite the raucous debates that fired back and forth between legislators serving in the United States Congress during the late 1980s—years before he was even born. He can tell you how, during the middle of a legislative session, policymakers started arguing about whether bologna, the love-it-or-hate-it sandwich filling, is “real” meat or not. And then, moments after, they switched topics to address child poverty.

“It’s fascinating how they talk[ed] about this,” says Connors, who has been laser-focused on learning all he can about how public policies could help lift families and children out of poverty, dedicating his senior thesis to the topic. Having spent the last four years analyzing policies dating back to the Great Depression, watching them morph and evolve through the 1950s, ’60s, ’70s, and all the way to today, Connors has been struck by his findings that government programs meant to alleviate child poverty have undergone a shift from providing direct benefits to people—like cash payments, or breakfast programs—to roundabout policies that sometimes fail to reach families most in need. To him, it doesn’t seem fair. So, he’s investigating deeper.

“When you really look into how distribution plays out, we are only helping some kids,” explains Connors. He’s most interested in the Child Tax Credit, the largest policy addressing child poverty in the nation. But the policy doesn’t benefit everyone the same; for a single mother with two children earning the minimum wage, the tax credit only went up by $75 in 2017. Meanwhile, the benefit for a married household with two kids earning $400,000 a year went up by $4,000.

“So, that single, hard working mother? Well, they’re saying her kids are worth $75, compared to these other kids worth four grand,” Connors says, his frustration palpable. With assistance from his thesis advisor Cathie Jo Martin, BU College of Arts & Sciences professor of political science, Connors culminated his research by finishing his paper, “Some Kids Are Worth Less: The Neoliberal Politics of Indirect Social Spending,” just days before the global coronavirus pandemic caused BU to move to remote learning, as life in Boston and around the world was completely upended by the virus’s spread. To Connors, the pandemic only further highlights the issues of economic inequality in the US.

“This pandemic is revealing the backwardness of how we address social crises and the shortcomings of our safety net,” says Connors.

As a resident assistant in one of BU’s brownstone buildings on Bay State Road, Connors is one of the few students left on campus due the coronavirus pandemic, working to fulfill his duties in the residence halls while finishing his academic semester remotely from his dorm. He’s been drawing inspiration from the current events, following the news and drawing comparisons between the historic $2 trillion economic stimulus package that passed in late March—of which the largest component of the bill will go toward the country’s largest corporations—to how the US addresses child poverty.

“Just like the Child Tax Credit, we are giving aid to those who are seen as deserving based on their economic worth,” he says.

Connors has seen firsthand how economic inequality affects children. In 2019, he served in an AmeriCorps program called DREAM (Directing through Recreation, Education, Adventure, and Mentoring), which facilitates youth mentoring with volunteers from 13 colleges in the Greater Boston area and Vermont. Inspired by his mother, who has been a kindergarten teacher in New York for over 20 years, Connors felt drawn to the program and encouraged by the idea of making a positive difference in the lives of children.

His days that summer were spent mentoring and bonding with a group of 10-year-olds from Roxbury, about 20 minutes from BU’s Charles River Campus, who Connors grew to cherish over the weeks spent outside, roasting in the sun, and sometimes getting roasted by the kids.

“I got roasted pretty badly,” he says, remembering how the children in the program playfully teased him for his stark T-shirt tan line after spending long days in the sun. Despite the precious moments with the kids, Connors recalls signs of poverty present everywhere he looked. He remembers a seven-year-old girl whose protruding joints signaled to him and the other summer counselors that food wasn’t always available and plentiful at home. Her parents couldn’t afford to keep their pantry stocked enough, despite each having jobs, nor did they qualify for the Child Tax Credit in its full value, Connors said.

“They’re really amazing kids who are going through unbelievably difficult experiences and situations,” he says. And the more time he spent with the kids, knowing this is the reality for millions of other children like them, the more frustrated Connors felt.

“In that moment, the solution seemed so straightforward: give kids food. If we wanted to we could probably have a breakfast program in this country tomorrow morning, getting kids free breakfast. But it’s like, why don’t we do that? Why do we instead go through all these hoops to give [their parents] a tax credit? We spent over $2 trillion in the past two decades on this tax credit. That can buy a lot of breakfast.”

The disconnect between giving impoverished families direct benefits—like breakfast or assistance through government programs such as Temporary Assistance for Needy Families—and indirect benefits, like the Child Tax Credit, emerged as a result of neoliberal politics, says Connors, which he defined as the reliance of policymakers on market means to achieve public goals. In other words, distributing aid through the tax code.

By going back in time to research how today’s policies came to be, it became clear to Connors that things weren’t always done this way. In the early 1990s, as politicians talked about giving benefits to economically struggling families through Aid to Families with Dependent Children, which was changed and renamed to the Temporary Assistance for Needy Families program in 1996, their language changed from talking about “hard working families, to calling them welfare families, implying they’re not productive and leeching off of taxpayers,” Connors says.

With funding from BU’s Kilachand Honors College, Connors conducted an 850-person survey to further gauge how the public interprets neoliberal policies that address poverty, like the Child Tax Credit. Half of the survey’s participants identified as Democrats and half as Republican. The results, as written in his paper, show that by including a form of a child tax credit, politicians are able to dramatically increase bipartisan support, even if the bill does little to counter poverty.

“Political actors can have a really bad bill that affects folks in the upper one or five percent, but they can attach this [child tax credit], and reframe the entire bill as being a tax cut for families and helping poor kids. When in reality, they’re really giving them nothing, in comparison to wealthier Americans,” Connors says.

With enough political will, he believes the solutions to social and economic issues, like child poverty, can be straightforward. Though government programs like Temporary Assistance for Needy Families and the Child Tax Credit have reduced the rate of child poverty, they have not been enough, nor are they designed to benefit families most in need. Connors points out that eight out of 10 Americans support universal breakfast programs for K-12 students—not just those living in poverty—and that by expanding and improving programs that exist, more children can be lifted out of the cycle of poverty.

At the present moment, his reality will continue to be working remotely from his temporary home on BU’s campus. He’ll be presenting the findings in his thesis later in April, via Zoom, to his peers and faculty members at Kilachand Honors College. After completing his degree, Connors hopes to move to Washington, D.C., to start work in public policy—and hopefully help make his vision of all kids being worth the same a reality.

There are 2 comments on Why Are “Some Kids Worth Less”?