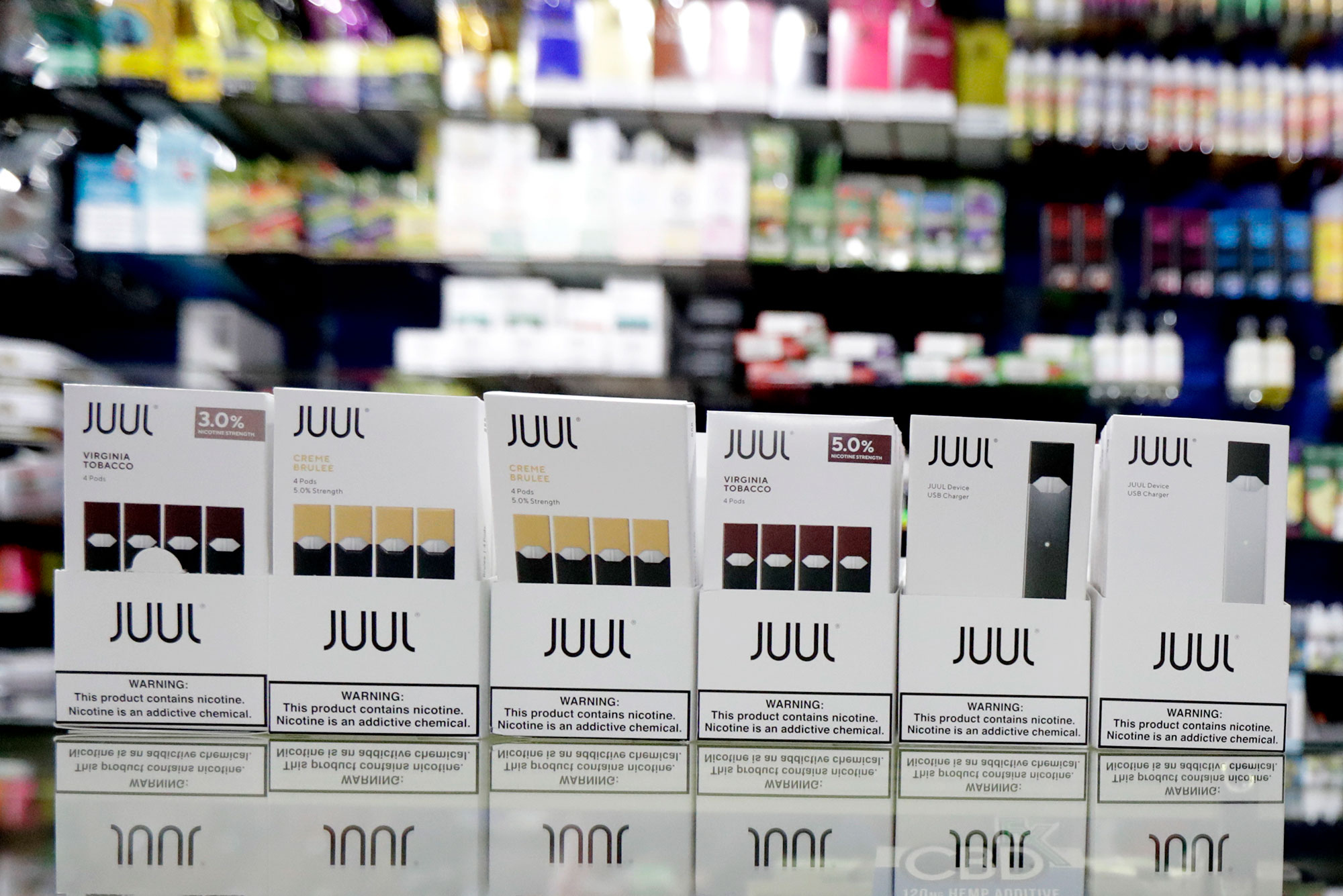 Packages of Juul e-cigarette products are seen on display at a smoke shop. Courtesy of AP Photo/Julio Cortez

Update as of October 7: The Massachusetts Department of Public Health has reported the state’s first death from a vaping-associated lung injury. The victim is described as a Hampshire County woman in her 60s.

Massachusetts Governor Charlie Baker on Tuesday declared the recent surge of vaping-related illnesses a public health emergency, calling for a four-month ban on all vaping products—both tobacco and marijuana e-cigarettes—and vaping devices being sold in the state.

During a press conference, Baker called the temporary ban a pause to give medical professionals time to further investigate these illnesses. As of this month, there have been 9 reported deaths linked to e-cigarettes and marijuana vaping pens and another 530 cases of vaping-related illness across the country. In Massachusetts, officials reported 61 possible cases in the state as of this week.

BU pulmonologist Hasmeena Kathuria expressed her alarm recently, saying the uptick in severe lung injuries and dying after vaping is “something very terrifying. This kind of acute health crisis has never been part of the cigarette landscape—this really feels like an emergency,” she says.

“Even though we’ve known for years that smoking cigarettes is the number-one killer, you don’t get up and die from smoking one cigarette like you can from one injection of heroin,” says Kathuria, a School of Medicine associate professor of medicine and a Boston Medical Center physician in pulmonary, critical care, and sleep medicine. “But now, youth are getting severe lung injuries and dying after [vaping].”

The Massachusetts temporary ban takes effect immediately, applying to sales of both tobacco and marijuana electronic cigarettes, according to the Boston Globe, and will stay in effect until January 25, 2020. San Francisco became the first major city in the US to end the sale and distribution of e-cigarettes back in June, and both New York and Michigan moved to outlaw the sale of flavored e-cigarettes this month.

Kathuria, vice chair of the American Thoracic Society’s Tobacco Action Committee, and her colleagues say research has revealed that 97 percent of youth e-cigarette users have vaped a flavored product in the last month. And 70 percent of users say flavors are a big reason they vape. The number of young Americans vaping has almost doubled—over 3.6 million high school and middle school students used e-cigarettes last year, an increase of 1.5 million over the previous year—and the dangers of the epidemic are suddenly coming into clear focus.

Gov. Charlie Baker Tuesday declared the recent surge of vaping-related illnesses a public health emergency, placing a four-month ban on sales of all #tobacco and #marijuana #vaping products. Do you favor this pause in sales?

Right now, there are still no good answers for what’s causing the severe lung injuries. CDC officials told Kathuria and other pulmonologists on a recent phone call that the vaping epidemic is so new, and moving so quickly, that hospitals and medical centers around the country don’t yet have a standardized way of diagnosing and categorizing patients—making it difficult for the CDC to track the disease occurrence and frequency.

On the flip side, Michael Siegel, a BU School of Public Health professor of community health sciences, warns that a categorical ban of all e-cigarettes comes with the risk of people switching back to traditional cigarettes, which poses its own set of life-threatening dangers. Siegel trained in epidemiology for two years at the CDC before coming to Boston University.

“Unfortunately, there is such an anti-vaping prejudice—and a growing bias against the use of e-cigarettes for smoking cessation—that many are hoping to be able to attribute these cases to traditional nicotine vaping,” Siegel recently wrote in an op-ed published on The Brink.

The Trump administration is expected to release a plan within the coming weeks for removing flavored e-cigarettes and nicotine pods from the market, amid public pressure for federal regulation.

“In reality, many studies have shown that the vaping mechanism and the inhalation process is not safe,” says Kathuria. “The FDA has failed to protect our kids in not regulating these products, allowing them to be on the market, and allowing flavorings.

There are 5 comments on Mass. Governor Baker Orders Ban on All Vaping Products and Declares Public Health Emergency