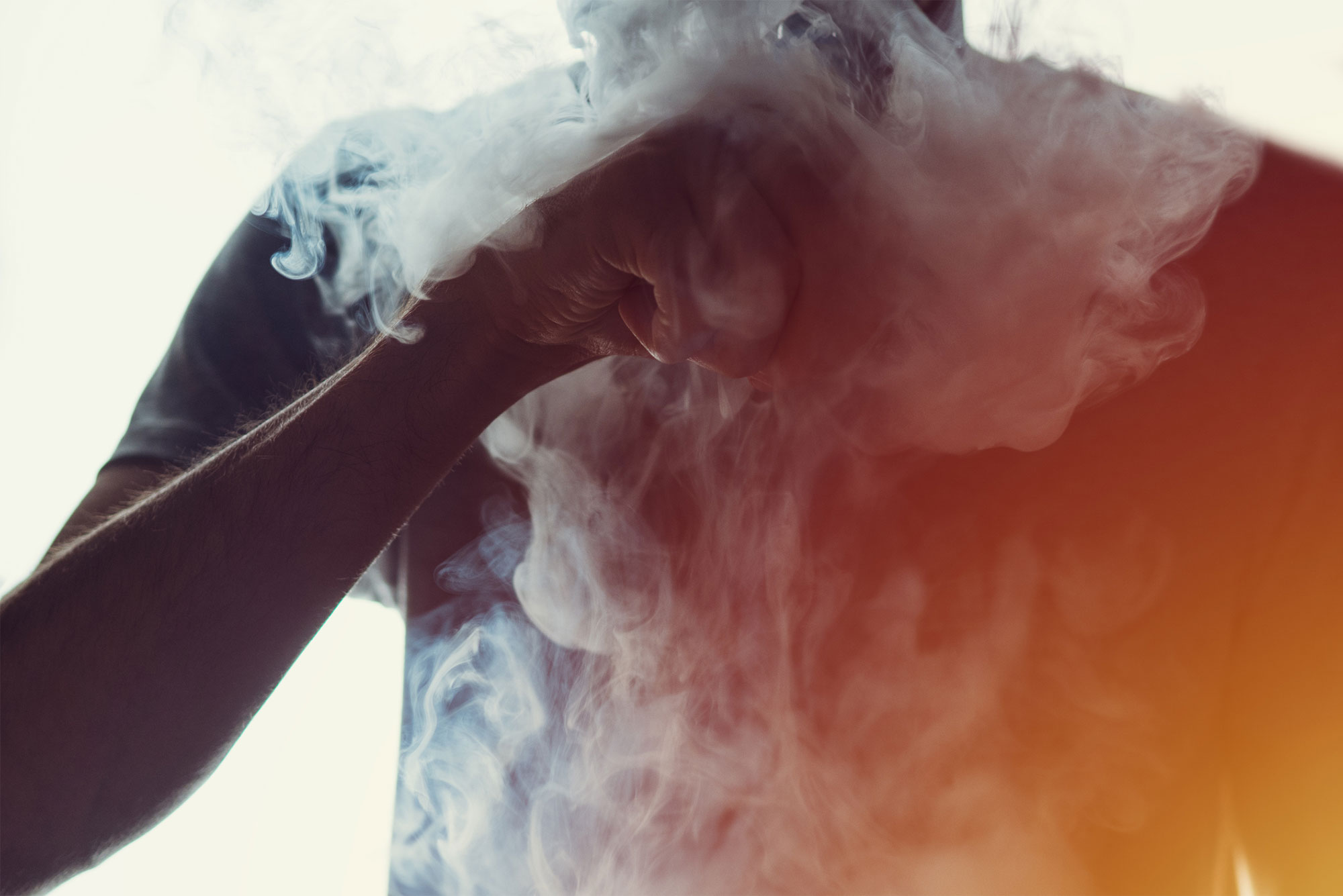 The CDC and FDA recommend that people stop vaping. A BU pulmonologist says this “has never been part of the cigarette landscape—this really feels like an emergency”

There have now been more than 450 reports of severe lung problems, and just in the last month, 6 deaths all linked to the use of e-cigarettes and marijuana vaping pens in 33 different states. In nearly 20 years as a pulmonologist, Hasmeena Kathuria has never been so alarmed. “Now, in addition to creating an epidemic of nicotine-addicted youth, vaping e-cigarette products is sending kids to the ER with lung failure,” she says.

The medical community, says Kathuria, a School of Medicine associate professor of medicine and a Boston Medical Center physician in pulmonary, critical care, and sleep medicine, is terrified, and the government has recommended that people stop vaping entirely until more answers are learned. On Wednesday, the Trump administration announced that it would move to ban all flavored e-cigarettes and nicotine pods from the market, including popular mint and menthol varieties. Last week, Michigan became the first state to ban flavored e-cigarettes, and New York, Massachusetts, and California are also considering similar bans.

Kathuria, vice chair of the American Thoracic Society’s Tobacco Action Committee, and her colleagues say research has revealed that 97 percent of youth e-cigarette users have vaped a flavored product in the last month. And 70 percent of users say flavors are a big reason they vape. The number of young Americans vaping has almost doubled—over 3.6 million high school and middle school students used e-cigarettes last year, an increase of 1.5 million over the previous year—and the dangers of the epidemic are suddenly coming into clear focus.

“Even though we’ve known for years that smoking cigarettes is the number-one killer, you don’t get up and die from smoking one cigarette like you can from one injection of heroin,” Kathuria says. “But now, youth are getting severe lung injuries and dying after [vaping]. That’s something very terrifying. This kind of acute health crisis has never been part of the cigarette landscape—this really feels like an emergency.”

On Tuesday afternoon, Kathuria dialed into a conference call organized by the Centers for Disease Control and Prevention (CDC). She was on the line with colleagues from around the country to hear the CDC’s updates on the vaping-related illnesses, caused by what Kathuria and other experts describe as “lung injuries” that have taken the country by storm.

On that call, the group discussed a host of questions, she says. “How should we be monitoring this? What are the mechanisms causing the injury? Is it certain heavy metals? Vitamin E metabolites? Certain types of products? The way they’re heated? We talked about how the CDC is making efforts to understand the products that are causing injury: are they nicotine-only products or THC or a combination? We don’t want to incorrectly send the message to the public that these lung injuries are only being caused by THC products, because there are reports of combination THC and nicotine, and nicotine-only products, that have also caused lung injury.”

The scariest part is that right now, there are no good answers. Because the vaping epidemic is so new, and moving so quickly, hospitals and medical centers around the country don’t yet have a standardized way of diagnosing and categorizing patients—making it difficult for the CDC to track the disease occurrence and frequency.

“There are smoking-related diagnostic codes, but vaping-related illnesses haven’t been routine,” Kathuria says. “If we want to begin to look at the impact of vaping nationally, we need a [standard] code so that medical providers can begin to understand how widespread the [related health] problems are.”

One potentially tantalizing clue has come from a team at the University of Utah that discovered the presence of fat-laden immune cells swarming the lungs of 10 out of 10 patients they’ve examined. The source of the fat? They say it might be from oils inside vaping liquids, and could mean immune cells are flooding people’s lungs to try and clear the foreign fatty substances. That sort of massive immune response could cause an inflammatory cascade leading to organ failure, not unlike the systemic damage caused by sepsis. Although it’s a compelling hypothesis, it’s far too early to tell for sure.

“They don’t know if that’s a marker of exposure [to a harmful substance] or if it’s a central element of the illness,” Kathuria says.

In the meantime, a total stopgap has been advised by both the CDC and the US Food and Drug Administration. “They have made a recommendation that people stop vaping entirely until the source of the lung injuries can be identified,” she says. Around the country, researchers are hurriedly analyzing as many samples from the 450-plus cases as they can get their microscope sights trained on, trying to hunt out the mysterious cause of the lung injuries.

A big problem is that right now, it’s not clear just what materials are making up the e-cigarettes and vaping devices on the US market, or what’s inside the liquid cartridges that are being vaporized into the lungs of their users. Kathuria says she and many of her colleagues point the blame squarely at the FDA for not using its authority to regulate all tobacco products, including e-cigarettes. “The FDA had the ability to remove all of these dangerous products through the 2009 Tobacco Control Act. However, instead of tightening regulations, they chose to delay product review,” she says. As a result, many products came onto the market—and still remain on the market—without a review of their impact on public health.

A lawsuit—accusing the FDA of failure to comply with the Tobacco Control Act—was brought in March 2018 by the American Academy of Pediatrics and its Maryland chapter, the American Cancer Society Cancer Action Network, the American Heart Association, the American Lung Association, the Campaign for Tobacco-Free Kids, the Truth Initiative, and five individual pediatricians. Based on the judge’s ruling, e-cigarette makers must now submit materials for proper FDA review by May 2020—moved up from March 2022—or risk their products being pulled from shelves.

“That’s still many months away during which these products can cause a lot of death and morbidity, especially in our youth,” Kathuria warns. “At a local, state, and national level, we need to stop this.”

There are 5 comments on Why Doctors Are Terrified by Sudden Vaping-Related Lung Injuries, Deaths

Why Doctors Are Terrified by Sudden Vaping-Related Lung Injuries, Deaths
5
share this