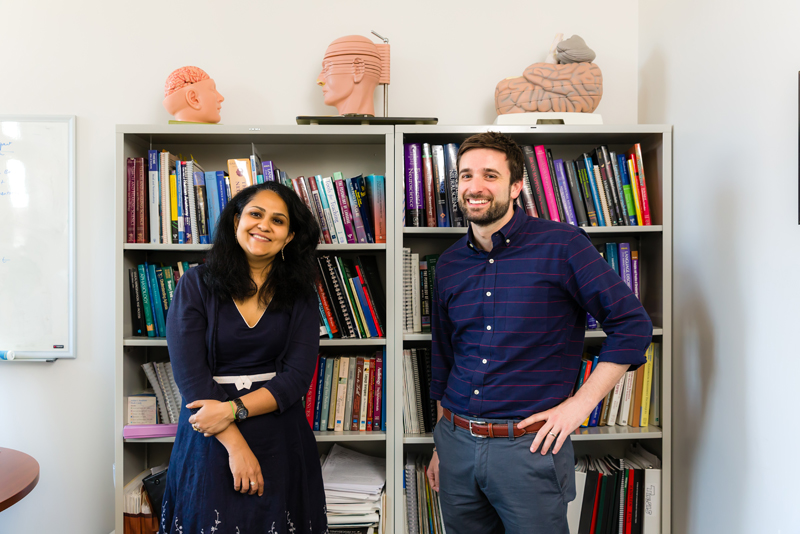 Swathi Kiran (left) and Jeffrey Johnson found that after 12 weeks of therapy, the brains of those with aphasia had normalized to a level more consistent with the brains of healthy individuals. Photo by Dana J. Quigley

Kelly O’Day has no recollection of suffering a stroke in January 2014, or of the months on life support that followed. She does know that when she was discharged from the hospital, she “couldn’t say much other than pleasantries,” she says. “I knew exactly what I wanted to say; I couldn’t get it out. I felt stuck.”

O’Day has aphasia, a language disorder caused by damage to the brain. Its challenges range from trouble remembering words to full loss of language. For some, like O’Day, commonplace objects are divorced from their names. A person might fix on a related word (“table” instead of “chair”), substitute sounds (“cham” for “chair”), create a nonsense word, or be unable to come up with anything at all.

“I knew it was a chair,” she says. “And I knew you sat in it, but it didn’t all come together. It was just fragmented.”

O’Day was scared, but she was also determined to get better. “I just kept working and working and working on my own recovery,” she says, “not knowing what to expect.” It was only when she joined the Aphasia Community Group and the Aphasia Research Laboratory at Boston University College of Health & Rehabilitation Sciences: Sargent College (SAR), and began comparing notes with others, that she realized patients often undergo therapy to recover language skills.

“[We can tell our patients] that as they get better, their brain is going to be more and more like a normal brain.” Swathi Kiran

O’Day’s situation is not unique. Stroke rehabilitation can vary depending on the severity of impairment, differences in insurance coverage, and a patient’s access to specialists during early recovery, among other factors. While some patients may undergo long-term speech-language therapy, others are not referred to clinicians due to the perception that rehab is most effective in the six months immediately following a stroke, with diminishing returns over time. Therapists often discontinue therapy because of the persisting notion that the brain reaches a recovery threshold and stops healing. That’s the theory Swathi Kiran, a SAR professor, and PhD candidate Jeffrey Johnson (’18) have proven wrong.

Johnson and his mentor, Kiran, a professor of speech, language & hearing sciences, and director of the Aphasia Research Laboratory, are researching impaired naming as part of a broader five-year study with Northwestern and Johns Hopkins Universities. The Sargent project, which began in 2013, recruited 15 people who had a stroke in the brain’s left hemisphere, the region responsible for language processing, at least 10 months prior. Before beginning therapy, they—along with a control group of 16 healthy adults—underwent fMRI scans to determine which regions of the brain were damaged and to obtain a baseline for treatment. In this preliminary stage, Kiran and Johnson made a surprising discovery.

It was previously thought that the regions surrounding the damaged parts of the brain’s language center responsible for impaired naming (portions of the frontal, temporal, and parietal cortex) would be inactive in an fMRI scan. Instead, Kiran and Johnson saw a great deal of activation in those regions and in their right hemisphere counterparts—more, in fact, than in the brains of healthy individuals.

This hyperactivity makes sense, Kiran says, because after a stroke, the brain struggles to make connections that once came to it naturally. “Healthy people have a very efficient way of going about language processing. It is pretty automatic,” she says. “What happens as a function of a stroke is that automaticity is lost, and language processing is laborious. Patients really struggle with simple things in an inefficient way,” resulting in increased blood flow around the brain’s language center. The researchers translate the blood flow into numerical values; hyperactivity registers in higher values than the activity of a healthy brain. The goal of therapy is to train the brain to focus and approach language more efficiently.

Once the researchers established the participants’ baseline language function and conducted an initial fMRI scan, patients participated in 12 weeks of biweekly therapy sessions at the Aphasia Research Laboratory. At the end of this therapy, the patients received another fMRI scan to monitor changes in the brain’s function.

During therapy—which the participants replicated in the fMRI machine—the patients viewed images of objects and had approximately four seconds to name them. The researchers selected specific objects to maximize the benefits of the therapy. “Since you could never help someone relearn the names for everything, people in the field are interested in trying to figure out how to get the most bang for your buck,” Johnson says. In prior research projects, Kiran had found categorizing words to be effective for impaired naming therapy; this particular study employed four categories: furniture, vegetables, clothing, and birds. Since there are limitless items in each category, the researchers focused on “atypical” objects.

“For example,” Johnson says, “a prototypical bird might be a sparrow; it’s small, it has a beak, it has wings, it’s brownish. It’s going to share a lot of features with other birds in that category. But a penguin, an atypical bird, is not going to share a lot of those features; it can’t fly, it’s bigger, it lives in the cold. By training with items that are further from the prototype, you see more improvement in items at the core of the category. So if you work on penguin, you are more likely to improve on sparrow” than vice versa. Study participants were trained on 18 items from each of two categories, with an equal number of prototypical and atypical examples. (“I learned a lot about birds,” O’Day says.)

At the end of the 12 weeks, the researchers compared the participants’ brain function before and after treatment. They were not surprised to find that the patients had improved—that’s what they had expected—but they were surprised to see how the improvement was characterized in the scans.

The overactive brain had quieted to a level of activity more consistent with the brain of a healthy adult. The damaged regions of the brain were normalizing. Equally surprising, the researchers discovered that this activity was not taking place along a right-brain, left-brain divide.

It was previously thought that when a stroke occurred in the left hemisphere, the right hemisphere would compensate for the lost function. But this study shows “it’s not so much about what is happening in a particular region, as much as the remaining regions and how they are interacting,” Johnson says. Kiran adds, “It’s not left or right, it’s left and right. It all depends on which parts of the network are damaged and how the rest of the network figures itself out.” Tracking this reorganization process could give researchers and clinicians a more accurate assessment of how specific regions of the brain respond to therapy.

The implications of this study are profound. Because each brain is unique, the region affected by a stroke in one person’s brain is different from the region affected by a stroke in the brain of another person. Previously, a therapist would not “necessarily know if a treatment is going to be beneficial to a patient” and would counsel therapy through trial and error, expending time and resources in the process, says Johnson. This study will give therapists the “predictive power” to see what works and what doesn’t in the brain of a particular person.

Because fMRI technology indicates exactly which parts of an individual’s brain are active when processing language, therapy can be targeted for that patient’s brain. “With these techniques, we are able to understand how the brain is recovering after neurological disease, see the mechanisms of recovery, and try to individualize the way we understand different patients and their trajectories,” Kiran says, which above all will provide hope to those who believed their brains were finished healing.

“We have always known treatment works because we see our patients improve over time, but this study proves that the brain is changing as a function of rehab.” Swathi Kiran

Typically when counseling patients, a speech-language pathologist could offer only the hope that the brain might reorganize to compensate for the function it had lost. A professor who once presented lectures might strive to speak a few sentences, for instance, and learn to live with “this functional, half-damaged system that is trying to compensate as best as it can,” Kiran says.

Now, however, Kiran says therapists can tell patients that their brains are actively trying to return to normal, even years after a stroke. “While we still cannot tell our patients that they are going to be 100 percent recovered, we can at least tell them that as they get better, their brain is going to be more and more like a normal brain,” she says.

This study confirms the work Kiran has been doing for the last two decades. “We have always known treatment works because we see our patients improve over time, but this study proves that the brain is changing as a function of rehab,” says Kiran, who will translate her findings into real-world help for those with aphasia. She has already incorporated treatment for impaired naming into Constant Therapy, an interactive, personalized app that she developed for patients to continue therapy on an iPad at home.

“We are able to take the evidence-based treatment we know is effective and put it into a platform where somebody in Nebraska can now practice the same therapy we conduct in the lab,” she says.

And the therapy is working. “Where I was a year ago, I couldn’t really have a clear understanding of things—of everything,” O’Day says. “If I think about where I was even three months ago, everything is more clear in my head. It feels like every month I get better at it.”

Getting the Words Back