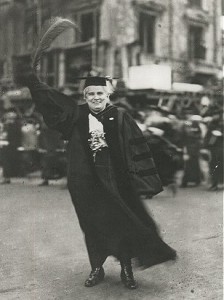 The Center is named for Anna Howard Shaw, who was born in England on February 14, 1847. The Shaw family immigrated to Michigan where Anna, at age fourteen, felt the call to preach and became one of the first women granted a license to preach by the Methodist Episcopal Church.

While serving Wesleyan Methodist Church in East Dennis, Massachusetts, Shaw earned a medical degree from Boston University. At age thirty-nine, she broadened her activity from pastoral and healing ministries to also become the “master orator” for social justice concerns, organizing and lecturing throughout the world for the causes of temperance, woman’s suffrage, and peace. Shaw was the first ordained woman to preach in Amsterdam, Berlin, Copenhagen, and London, and the first woman to deliver a sermon in the State Church of Sweden. The first woman awarded a Distinguished Service Medal for her work as chair of the Woman’s Committee of the National Council of Defense during World War I, Shaw was an advocate for the League of Nations covenant just prior to her death in 1919.

In 1989, Anna Howard Shaw and Anna Snowden Oliver, the first woman graduate of Boston University School of Theology, were elected posthumously as full members of the former Southern New England Conference of the United Methodist Church. In 2000, Anna was inducted into the National Woman’s Hall of Fame in Seneca Falls, NY, birthplace of woman’s rights.

For excerpts from her life, view the sermon from the 2001 Recognition and Remembrance Worship Service.

Read pieces of her book, The Story of a Pioneer, online at http://books.google.com/books!

For information about the Anna Howard Shaw stained glass window that hangs in the stairwell at Boston University School of Theology, please read One of God’s Amazing Women by Shirley B. Porter.

A bibliography is available for information on how to learn more about The Rev. Dr. Anna Howard Shaw.