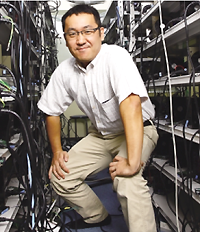 Tsuyoshi Hamada is the head of the massively parallel computing division and deputy director of the Nagasaki Advanced Computing Center (NACC) and associate professor at Nagasaki University.

Tsuyoshi Hamada obtained his PhD in 2006 from the University of Tokyo. From 2006 to 2008 he was a Special Postdoctoral Researcher at RIKEN. In 2008 he became an assistant Professor at Nagasaki University, and was promoted to Associate Professor in 2010.

He has worked on massively parallel architectures based on FPGAs and GPUs. In 2004 he wrote a compiler PGR for FPGAs to automate the programming of reconfigurable systems. In 2005 he designed a FPGA-based computer PROGRAPE-4 and achieved 243 GFlops/board and 7.7 TFlops for the entire system.

With his large GPU cluster (DEGIMA), he achieved a sustained performance of 158 TFlops and $7.2/GFlops, which led to the Gordon Bell prize for price/performance at SC’09. In 2010, he changed the interconnect to Infiniband and achieved 190 TFlops. His paper has been selected as a Gordon Bell finalist for SC’10.